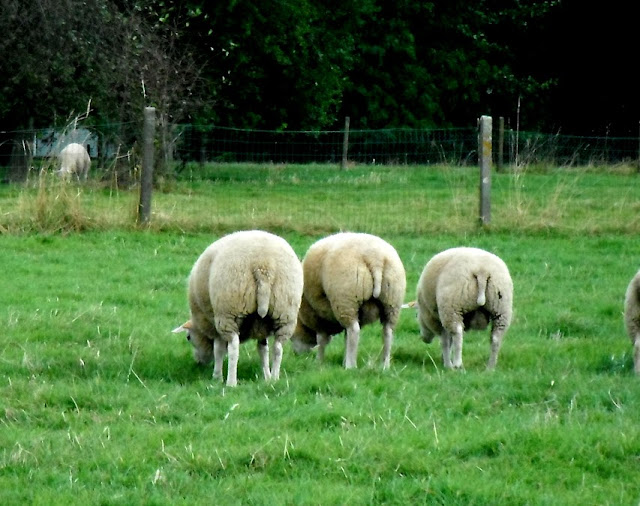 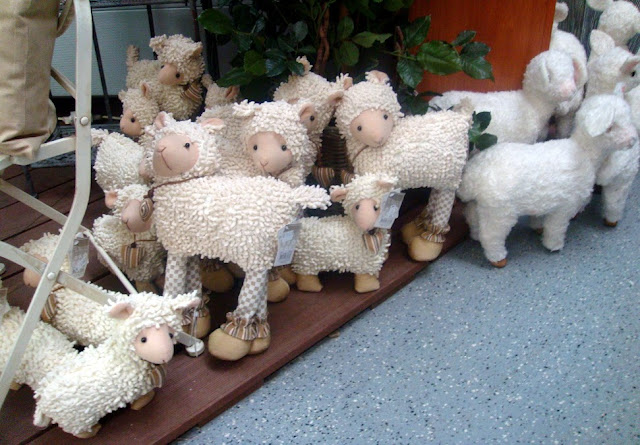 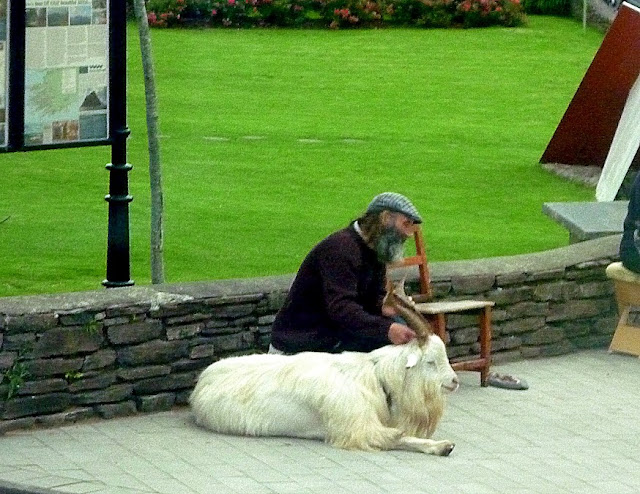 When I was sitting in the Eurostar, I noticed to my horror, that I had left the case with my credit cards, health insurance, driver license etc at home ! The young woman besides me felt that there was something wrong with me, and I told her what happened. She reassured me that there was no problem everywhere in England I could pay with Google wallet which I found on my phone and with which my Eurostar tickets had been payed and appeared in all their glory. As my train to Eastbourne was payed and the hotel with breakfast too, it was not so dramatic, anyway I had 50 £ in cash with me. In short I was a rich woman !

The first thing I did arriving in the hotel was downloading Google wallet, but big problem, now they wanted to know the card number etc etc. I called my neighbor Adeline and together with Louquette the other one they searched my apartment and found it. She called me back and gave me all the numbers I needed. I tried again, but that dammit thing told me that it wouldn't work in "this" country. I don't know if they meant the UK or Belgium, I was again at the start of my tragedy. All that had cut me my appetite and I was not at all hungry in the evening. My hotel included breakfast but not supper.

The next day I ate like a horse at breakfast with the result that I was not even hungry in the evening. Anyway all little restaurants and take away were closed on the Pier across the street at 6 pm due to electricity prices and not enough tourists. I had to go to the main street where I found a nice Take Away of ..... Hamburgers !! which I only eat if I am with my grandson. But the guy probably reading on my face proposed me a cheeseburger with fresh tomatoes and told me I could ask whatever I wanted. I payed 4.50 £ and returned to the hotel. The Hamburger was the best I had in my whole life, the meat was so tasteful coming from a happy cow probably and the cheese too, the fresh tomato slices certainly organic ! My problem with food was solved it didn't bother me to eat that the whole week long, I just imagined that I would be a student with not too much money. I even could allow me a sightseeing, where I took the pictures below and the little tourist train called ".

The South Downs are a range of chalk hills that extends for about 260 square miles across the south-eastern coastal counties of England from the Itchen valley of Hampshire in the west to Beachy Head, in the Eastbourne Downland Estate, East Sussex, in the east. 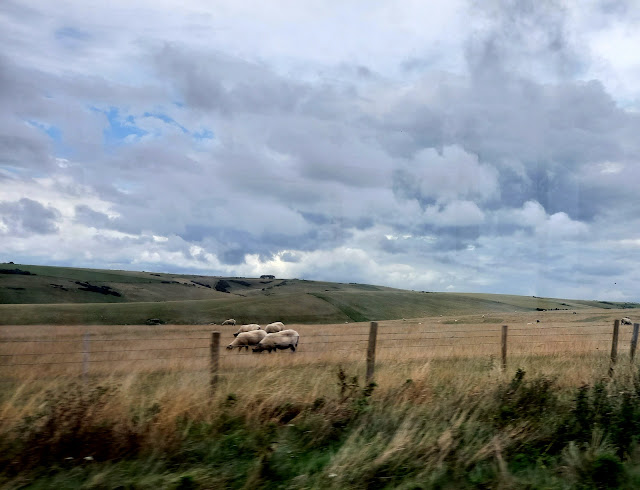 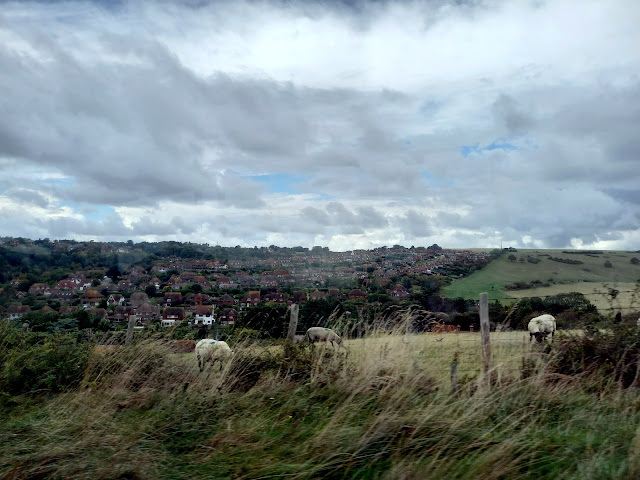 grazing sheep and cows are also good for the nerves ! 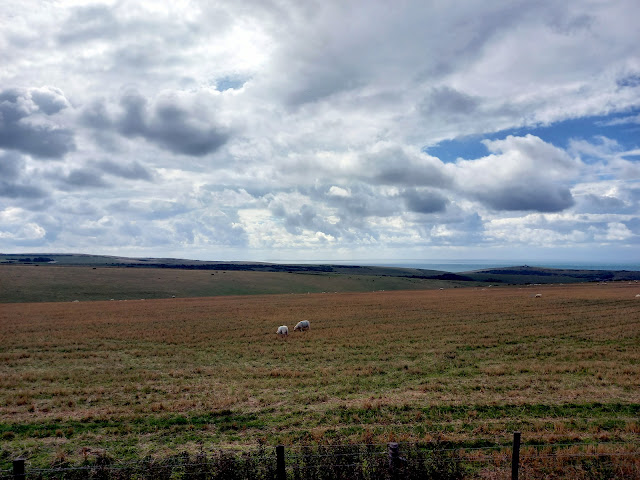 and the green, green grass and soft hills, what a pleasant view ! 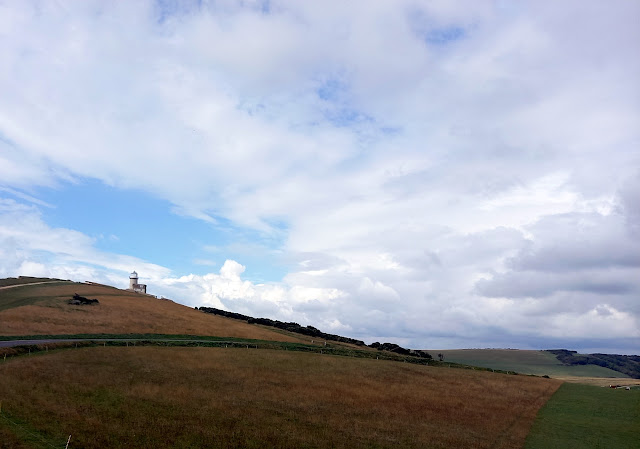 Just behind this hill were the white cliffs, dangerous for everybody because you don't see where the grass stops and you fall down the white cliffs. Unfortunately there are a lot of people committing suicide there. 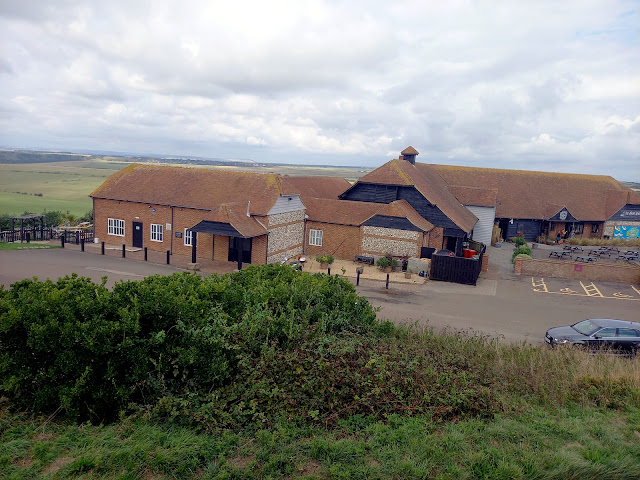 This old farmhouse was transformed into a restaurant 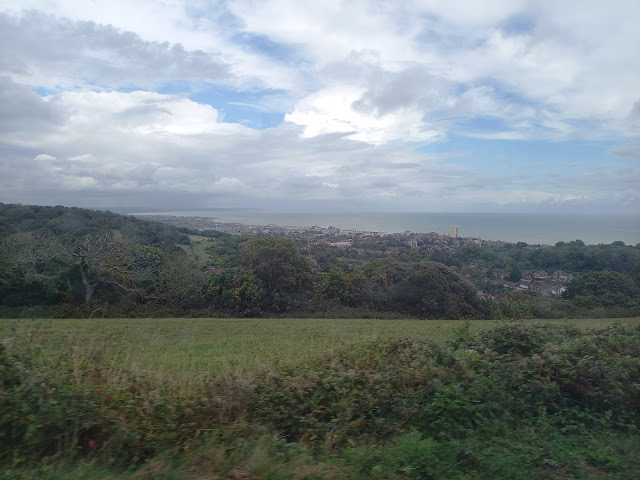 from far I could see Eastbourne 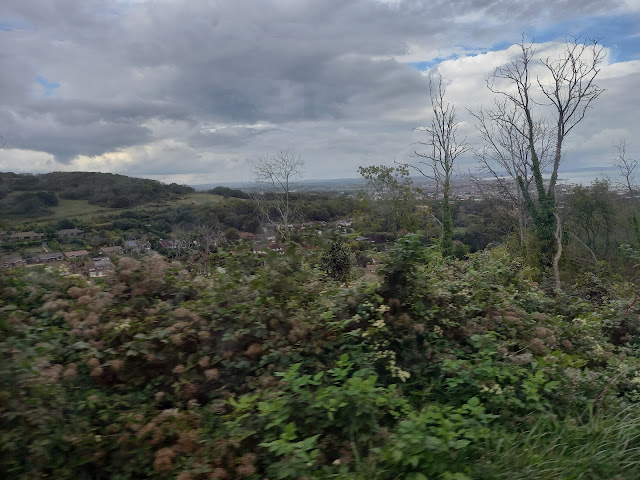 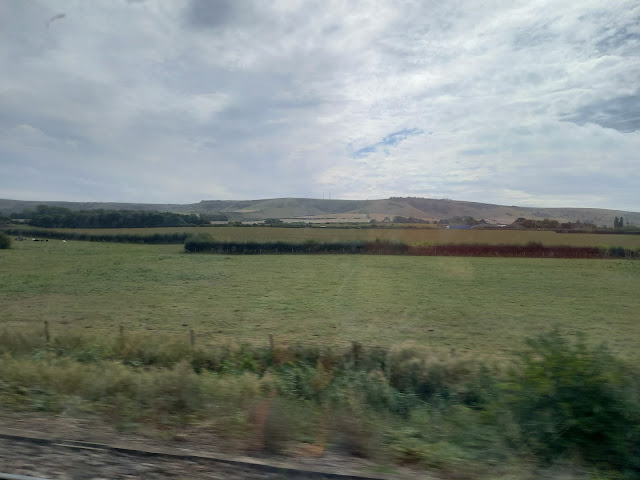 it is so peaceful up there 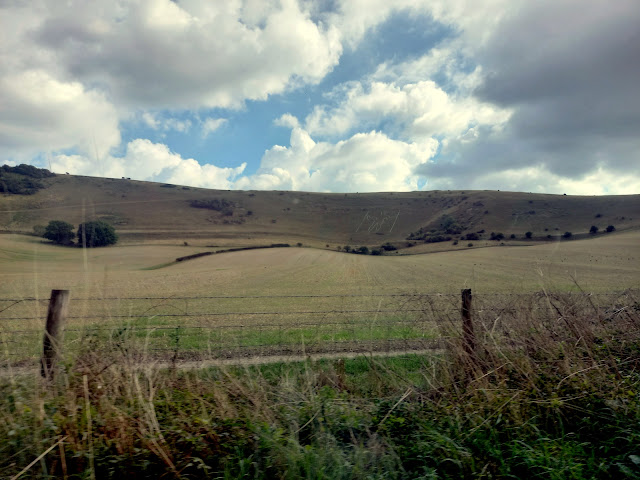 On this hill in Willmington was carved 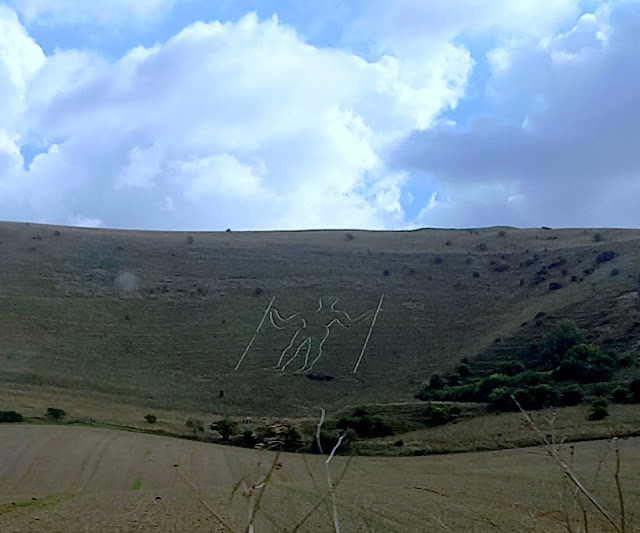 The long man of Willmington. Today, the giant is outlined using white-painted concrete blocks, and it is known to have been picked out in bricks during the late 19th century, but its origins lie in the Tudor period.

The next day, my friend Yvonne took me to a Tea room hidden in the woods 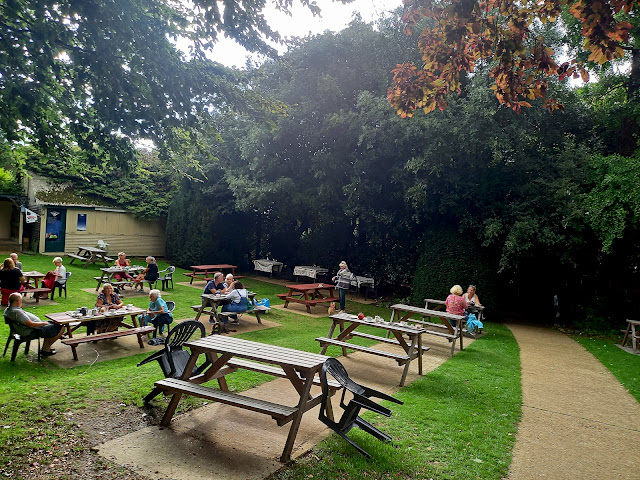 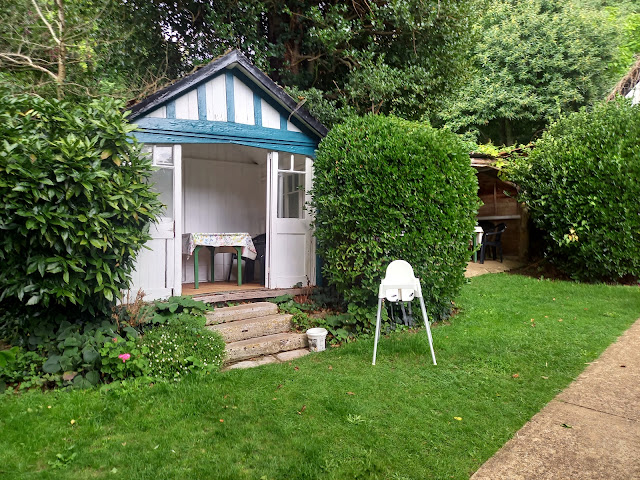 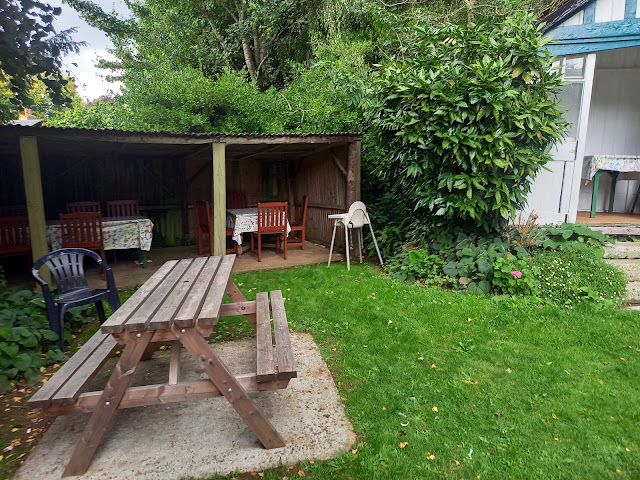 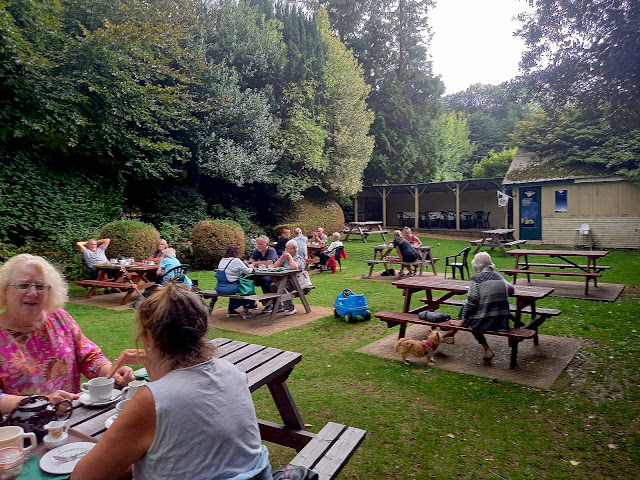 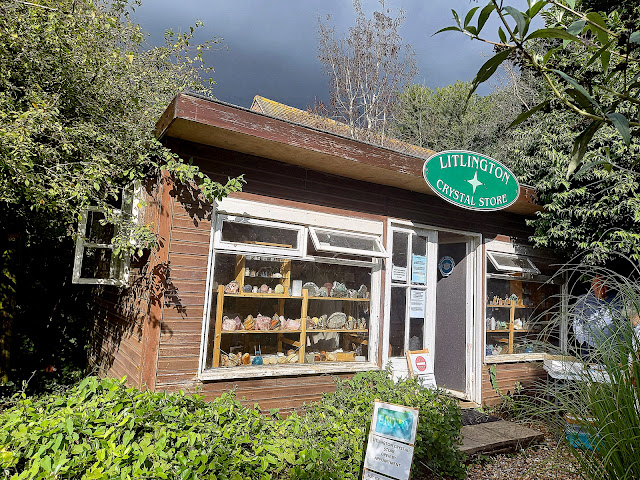 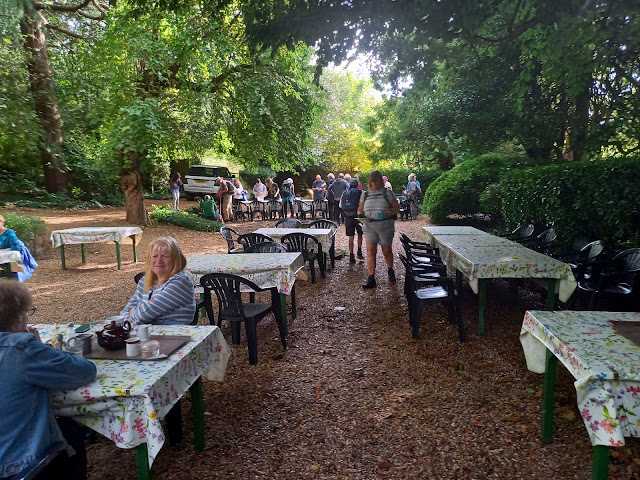 The place was apparently well known because there were quite a lot of clients. I was happy that Yvonne took me around to the places (except this tea room which I didn't know) where I once had been with Anne. On the way back we visited her daughter before she brought me back, close to my "Take Away" shop where I picked up my every day bigger Hamburger ! The owner must have had pity with me !

I guess it was this day when I switched on the TV just to hear that the queen had passed away. I wondered if she had waited for my coming to the UK ?

If you have difficulties to comment, just scroll down to :
Subscribe to: Post Comments (Atom)
click on it and then you can comment !
I have the same on other blogs and it took me quite some time to find out !
Posted by Gattina at 06:30