Another week towards Christmas which I really fear this year. I had to bring fresh laundry to Mr. G, fortunately it is only his personal laundry and not the bedsheets or towels. My neighbor Adeline wanted to come with me to see the retirement home. For the moment she is a real  young woman despite her age of 83, younger anyway than I feel for the moment ! 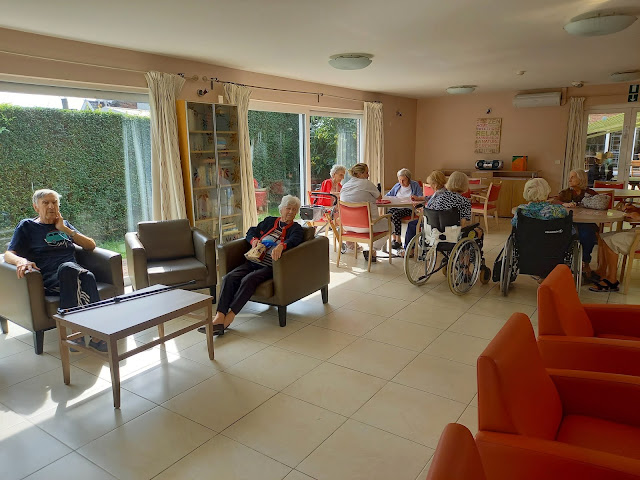 When we arrived, they were busy playing "Bingo" ! I watched a while and found that they all played very well. Mr.G. didn't want to participate because he doesn't know the game. His disease makes him very stubborn ! Fortunately the host didn't leave him in peace, so one day he will join in ! Adeline  was enthusiastic about how nice and friendly everyone was and how beautiful the building and
greenery around. We stayed a while and watched the game, then we returned home and had a drink together.

I had to take little Rosie to the groomer because now that she is an inside cat her claws become long despite the scratching board.  She didn't protest when I put her in her new carrier, which is like a handbag for me but sang operas in the car. In no time all claws were trimmed and the young woman whom I hadn't seen since Arthur passed away, had so much to tell that she didn't want any money. She said it was so quick that she couldn't put a price on it ! Rosie returned into her carrier, meowed a little less and was happy when I let her out at home. 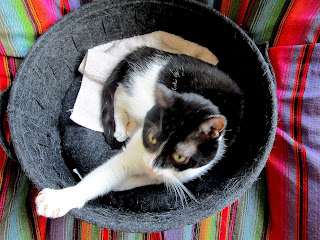 The owner of my apartment came from Spain where he lives his retirement life just to say hello and if I had a complaint, fortunately I hadn't so we chatted a bit and then he left. He is very kind, a real old fashioned gentlemen !

Nicole wanted to say hello to Mr. G, so we went there and this time they played another game,  to find words. It was so interesting that Nicole and I participated, but there were women between the players they were quicker then us ! 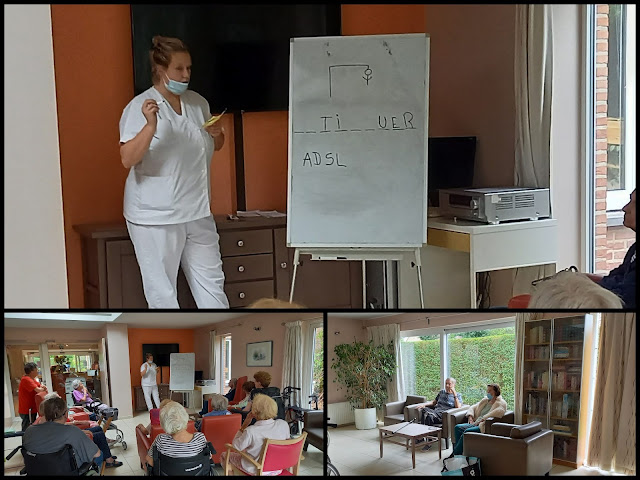 We left when the game was over and Nicole who is already on the list, will go there too. With her brain cancer, she is still in a good shape, but it becomes difficult to live alone.

That's what I did this week, I don't know I am really not motivated to go to an expositions or events, there is still this Corona Virus hanging  over our heads. I don't care, but some people are really hysterical ! 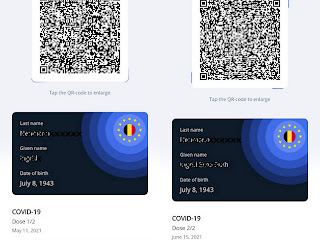 This is how the the Covid certificate looks like I have it in my smartphone. In France you have to show this when you want to go into a restaurant, Theatre, bar, in short everywhere otherwise you are not allowed to enter ! In Belgium and other European countries they are discussing heavily to do the same, lots of people refuse the vaccine ! I think that's stupid.

It sounds like here with some people refusing the vaccine. You sound a bit down again. The pandemic does that to people. It is very bad here with lockdowns. People are suffering mentally. So BSW is starting to open up again even though they have hundreds of cases every day. We are lucky in QLD and don't have any in the community at the moment but truck drivers keep bringing it over the border because they are allowed in to deliver goods. Hope you can get with your friends again soon.

Perhaps not the life you imagined when you moved from your house to an apartment, but wasn't it so great that you did it when you did. You are in a modern and comfortable place now without worries about your home, and you can watch the changing seasons easily. My cardiologist today told me we will all eventually catch Covid and as long as we are vaccinated, we will be fine.

That's so good that you visit Mr. G. so often and bring friends. So often people seem to be forgotten once they enter a retirement home. It's so good the staff does games and such with them, too. At one place my mother-in-law was in, all they did was herd them around the TV every day. What a nice gesture from Rosie's groomer.

You have found such a good retirement home for Mr G that all your friends will be queuing to go there soon.

Good that Rosie did well with the groomer.

Mr. G's retirement home does look like a friendly, clean, fun environment. I think he will eventually start playing games.
How nice of your landlord to stop over and check to see if you were happy in your apartment. Unusual man!
Have a good weekend!

Hi Gattina, I'm glad to read an update from you and to find that Mr. G now has a good place to live where they have people to look after him 24/7. I'm sure it has changed your life so much. I see you have a vaccine passport and we also have one where I live to enter the same kind of places. We don't need it for other places like grocery shopping, pharmacies, libraries. Wishing you well.

Things are lot better as we age. I can call the old nursing home. No Thank YOu.
Coffee is on and stay safe

Your retirement home for Mr G is looking like a wonderful and very caring place. I am thankful for you both.

Its all about to get or not to get the vaccine here,too, and in some places you must show proof...but not here where we live...yet...

Thank you for stopping by at my Post Cat in September. Now I'm reading with pleasure your Post here.

Yes, I agree with you. There are hard times now with Corona. But... and it's a great, great but. We have to eat, we have a Cody home and of course Books, TV and telephone. Remembering in history there are nothing of this things of our Modern World.

I used to have scratch poles that were never used by the cats. I now have a doormat that gets a lot of use, Miss O just loves it. Scratch poles are at least 15 euros, doormats are about 8 euros!

How sweet of Rosie's groomer to trim up those nails for no charge. I can just imagine the "concert" she gave you in the car. The retirement home looks like a nice bright place. Maybe Mr. G will eventually start to play the games. That was nice of your landlord to stop by and make sure everything was good with you and your home.

I am sure there is a lot going on in your life right now and perhaps you need to rest a bit and try to find some energy. Mr G seems to be looked after well.