From "winter" we jumped into summer temperatures and I was glad that I hadn't changed anything in my "dressing", years ago in autumn I separated winter and summer clothes but since only the trees have the four seasons, it is not worthwhile anymore. From my autumn clothes I jumped in a T-shirt.

The umbrella I had ordered had arrived and Myriam helped me to assemble it, which means she did all and I watched ! She had the good idea to attach it with a cord in case the wind wanted to blow it away.

Despite the sunshine we had our scrabble inside and not as usual on her terrace, because she has a very naughty and uncooperative neighbor and she didn't want that saw that we were more than the lockdown rules allowed. He has a pump for heating his swimming pool which is so noisy since he changed its place that she can't stay on her terrace. She had tried the friendly way but he shut the door in front of her nose and then she had to call the police for an official statement and now it goes further !

I am happy that we have nice neighbors and we are only 3 on the same floor. Yesterday the fire alarm went on and made a hell of a noise. As it was early morning we all appeared in nightgowns or pajamas, the hairs standing up and wondering how we could stop it because there was no fire, the cleaning man had pushed too hard on the case when he dusted ! Fortunately the youngest neighbor who is the mother of little Michael Jackson (the boy looks like a twin when Michael was a kid)  disappeared in the basement and then suddenly the awful noise stopped ! We all were happy to have somebody on our floor who knows what to do ! We were standing there looking all very chic and laughed and chatted a bit before everybody went back in his apartment !

After 5 years without glasses now I needed one again ! I picked them up and it was strange because they are bifocals, but it lasted only one day and now I feel "normal" again, if that is possible. 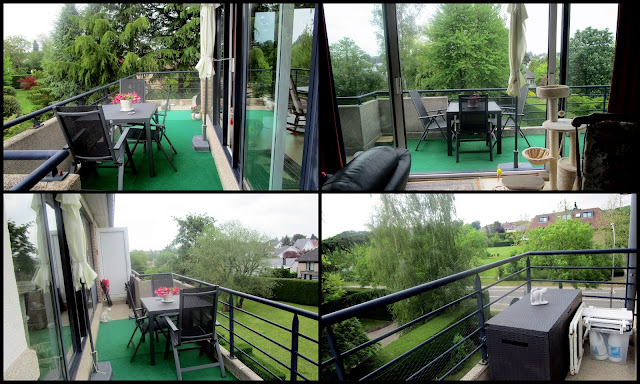 Two days later after having helped me with the parasol, Myriam came back and assembled the box to put cushions and all the stuff which lay around on the balcony.  Now with the "green grass" and no junk anymore laying around it looks  nearly like a living room !

To end the week the Doctors had kidnapped Mr. G. can't sayanother word ! They had brought him back to the Waterloo Hospital for a Scan, but hadn't told me anything. Fortunately a friend of ours was visiting Mr. G this day and the Doctor thought, instead of asking, that she was his wife and had told her about the transfer back to the Hospital. It's a too long story but I had to wait until 5 pm when I finally got an answer where he was !  I was was so angry and at that time of course you can't get hold of a doctor, but at least I got his telephone number. As he was tired and confused I couldn't find out what they had done with him so long and have to wait until tomorrow when I or my son will call the doctor and ask for some more details ! It's a shame they are all very friendly but nobody knows what the other is doing.

This ends my week and I am so tired because I was worried the whole day. 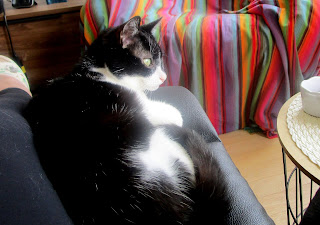 Rosie had interrupted her lockdown sleep and was watching a pigeon which sat on the metal tube of the balcony.

Your balcony does look very lovely with the green grass. And tidy as well.

But what a thing to do with your husband! Did they not know she was not his wife? And did she not say anything? I hope he is not missing anymore and right where he should be right now. And hopefully those scans they just had to do turned up fine. Good luck with all the phoning required today.

Remind Mr G that the Melbourne Grand Prix will be held in November this year, not March. That's something for him to look forward to seeing and get better.

We have that heat here now.

We have been enjoying some nice weather here too. So sorry that there have been continuing issues with Mr G. Hope that all will be well with him soon.

I am so glad there wasn't a real fire and someone knew how to shut off the alarm. Your balcony looks very nice! What a weird situation with Mr. G. Hope they can give you some answers soon.

Oh wow! I hope you have gotten an answer and an apology from the doctor by now. I hope Mr. G is ok.
And Scrabble is always a fun afternoon activity, even inside.
Your morning fire alarm story made me laugh. Fortunately, there was no fire.
Enjoy your weekend!

It is so good that you have Miriam to help out and friendly helpful neighbours on your floor. The balcony looks very inviting. Sorry to hear about the poor communication between the doctors and you. Hopefully you can find him and visit soon, and find out what they are doing for him.

Your balcony looks great. I hope you get good enough weather to enjoy using it. So sorry to hear about the problems with Mr G and the hospital appointments. I hope things are sorted now. It must be so stressful for you.

Myriam sounds like a very handy type of person. The balcony looks nice. Glad there was no real fire! Hope Mr. G. is doing better soon and hope you can get some answers about why all that lack of communication happened.

Oops, that was me that left the last comment. Forgot to do add my name and URL

Flags Of The World said...

I hope you can get the answers you need about your husband. How horrible to not know what was going on!

Thankfully you didn't have a fire on top of everything else!