On Monday when I looked out of the window my world was white ! See here ! It was years that it hadn't snowed like this ! Usually we have a few snowflakes which last two or three days and then were gone.

Snow is very beautiful for some people, but not when you have to drive and just on this day it was the Whist day of Mr. G. The man who takes care of our building had salted the snow, which of course hadn't worked at all because as soon as the snow had melted it started to freeze again which was even worse. Unfortunately the exit was not flat, but I had to drive up a little hill. I tried three times without success. Then Mr. G tried and managed, of course he is used to mountains when he lived in Italy.

The streets were not cleaned at all and I was relieved when I dropped him off and returned home. I managed to drive the car into the garage and thought, that's a day to stay inside, which I did !

Next day was Scrabble day and we went to Myriam. She had prepared her table to make a very big painting for her daughter. It's 2 m long and 80 cm large ! Fortunately she has enough space ! 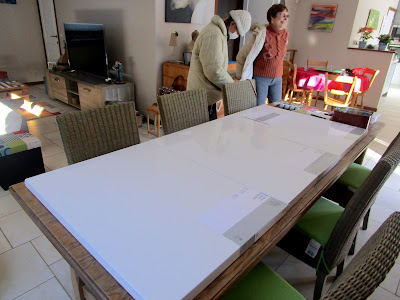 The canvas were still white, she just had got the colors. It will become a landscape in France. The snow was also covering the swimming pool which was frozen 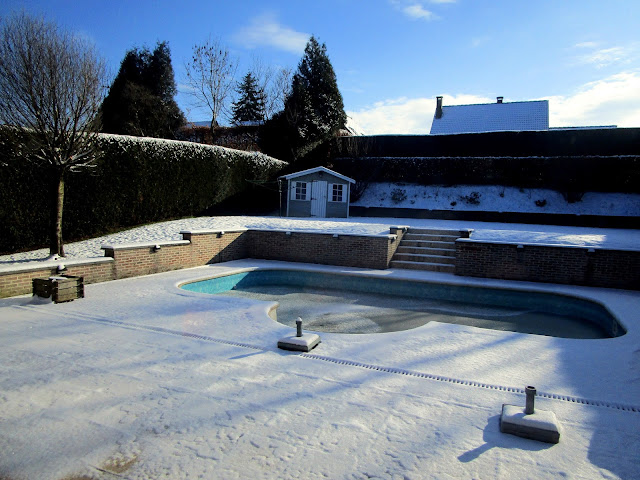 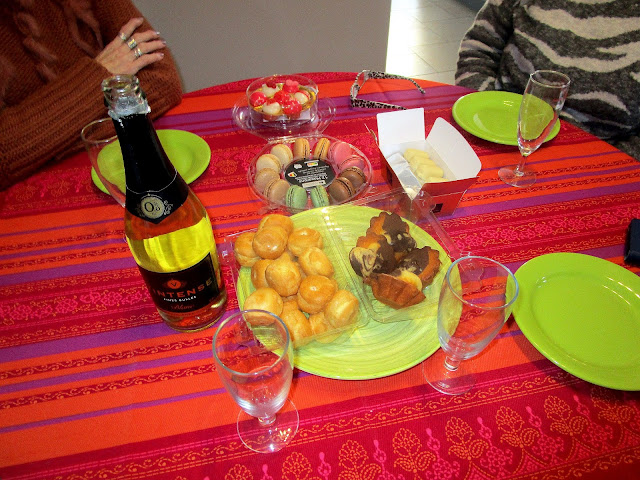 After scrabble we celebrated Chantal who had become grandmother for the first time, just when she arrived at the door, her son called her from Canada to tell her ! Of course Myriam opened a bottle of Champagne and I had brought all kind of little cookies which were delicious. Of course Chantal was very happy. Another boy in the family !
When summer was finished I stated that in Mr. G's room the balcony door didn't close correctly. It didn't matter when it was warm but when it became cool and then cold I had absolutely to find somebody who repaired the door. I was lucky, I asked the man who always helps me with everything and who is an allround man, he repairs everything. In only an hour he arrived, and repaired the door, there was only a screw broken, and as he was already here, he also repaired a board which was loose in the kitchen. The next day the temperatures dropped to - 10 °C rather seldom in Belgium, so I had the door repaired just in time before Mr. G. became a frozen statue !
The next day I had to drive Mr. G. to the kinesitherapy, he hadn't walked enough since he broke his hip and had stopped kinesitherapy too early, then came the first lockdown and then the second which was not really ideal for a even in normal times lazy  jogger ! 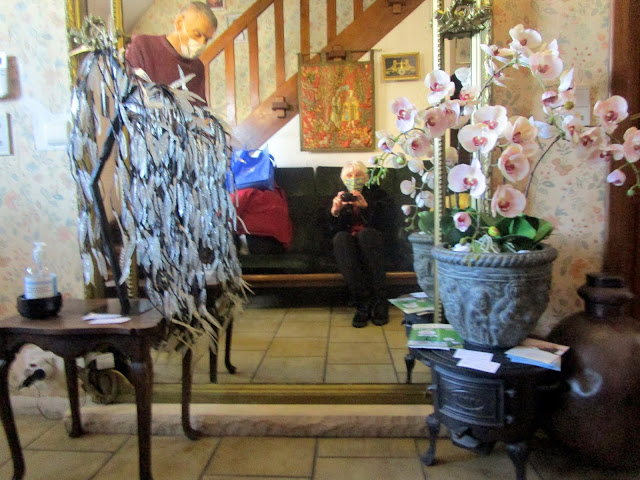 The waiting room was very pleasant I thought I was sent back into an earlier century. Apparently the young man came twice to Waterloo for his patients and had his office in his parents house. That explained it all. After half an hour exercise I drove an exhausted Mr. G back home, where he sank immediately on the sofa.
I then did my shopping ..... Usually it's always him who does it, but he has to take a medication and is not allowed to drive. That's why I have a new job I became chauffeur !
And as this time of lockdown is not really funny, I found a mask with smilies  ! 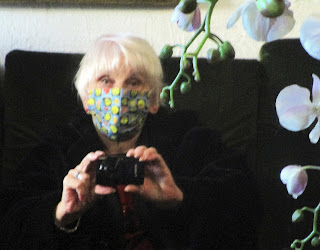 So sorry to hear you are still in lockdown...but if that's the case then why are you driving all over?? When we were in lockdown here you could only go to grocery stores or doctors. So weird how different countries do different things. Our cases of covid are finally decreasing here in the New York State area. Thanking God for that!!

Snow is pretty. We haven't received much this year ...just enough to make things look pretty in the sparkling sunshine.

Scrabble is one of the few games I like to play. I'm not much of a fan of board games. How fun that you have a group to play with!

My grandson peeked over my shoulder and saw your food photo and stated, "That looks really yummy!"
I need to borrow your handyman! We have several things that need repair but it's hard to find someone to come!
Stay warm in your sweet cozy apartment.

It been a while since I played scabble our local library at one time had scabble day.
Coffee is on and stay safe

Congrats to your friend Chantal on the birth of her grandson!
I like your mask; it's attractive!

A good handyman that knows how to fix all sorts of stuff is a real blessing. Fortunately in our family that is my hubby though he doesn't always like the job. Congrats to your friend on her new grandson. Driving on snowy roads is not fun when you are not used to it. Around here it takes a lot for people not to drive.