1. How do you define peace?

That nobody bothers me with questions and let me in peace doing my things. A part from that, we should not bother about skin colors, languages, religion etc and all live in  peace !

2. November 3rd is Election Day in the US of A, but did you know it's also National Sandwich Day? Let's vote, shall we? egg salad or tuna salad? chicken salad or grilled chicken on a bun? peanut butter and jelly or a bagel with cream cheese? turkey and swiss or ham and cheddar? grilled cheese or pimento cheese? roast beef-corned beef-or make mine veggie?
Not only I have the chance not to vote because I live in Europe but amongst these typical American food I would like turkey and swiss (cheese) Nobody eats peanut butter here, I think you can only get it in specialized shops.
3. When did you last say (or feel) 'no rest for the weary'?
Can't remember because I feel weary every day ! At my vintage age I am allowed to, I wait until it's over.
4. This time last year, where were you?
at home and it was a horrible day ! My cat Kim passed away, my husband's best friend, passed away and we were there feeling like knocked out. It also was horrible outside windy and rain. A Blog is something real nice when you want to look in the past !
5. Share a favorite song, verse, or quote featuring the word 'peace'.
"Peace and Love". I don't remember a song or verse right now, but for me it is an expression which was very much in use when I was a Teenager and used as a sign of recognition in the 1960s by the hippies, I wasn't a hippie but in some way I admired them and would have liked to have a T-shirt, which the Hippies wore what is called  the "Woodstock generation" - T-shirts which caused a sensation by their ease of customization and their simplicity of use - to protest against nuclear weapons, against the Vietnam War or to express their desire for a healthy future without pollution. 60 years later we still have the same wishes ! Not much has changed. 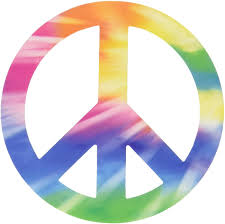 Peace sign
6. Insert your own random thought here.
We managed to reach the second lockdown which started this monday. As nearly all European countries are in the same situation I can only blame a bit our government which hasn't taken the necessary action in time, because they were busy to form a new government and selecting the different ministers. Of course politics  first health at the end ! There is nothing to do then protect yourself with a mask and not go out too much when there are many people. You are allowed to receive one visitor in your home (as a couple) but you can travel in a bus or train without any restrictions. Theoretically I could celebrate a birthday party in a train, because I am not allowed to do it at home. I would choose the train because the bus shakes to much for Champagne and cake !

It's nice to see you here today! I enjoy looking back through my blog too. It's interesting to see what's changed and how certain experiences look in hindsight. Stay well!

I love peanut butter, and usually have it with jam or honey.

Here we say 'no rest for the wicked'. Yesterday on National Sandwich Day I had my favourite chicken and avocado sandwich with mayonnaise. On rare occasions I have peanut butter or cheese and vegemite.
Trains here have green stickers saying sit here or stand here and no one is supposed to get on the train if there is no green sticker seat free. This is ignored and never checked on.

I didn’t know peanut butter is not widely consumed there. Here we can find in any grocery stores!
I like egg salad sandwich :-)

There's no prolem getting peanut butter here but not always the brand that my American DIL enjoys best. Yes the lockdown rules can be very confusing and illogical.

Haha, that's true. You could celebrate your birthday on the train and have a party there. It would be so funny.

Sometimes the rules and restrictions don't make sense but I hope it improves the situation in Europe. We are lucky here at the moment.