MEETING THE GROUP IN MUNICH 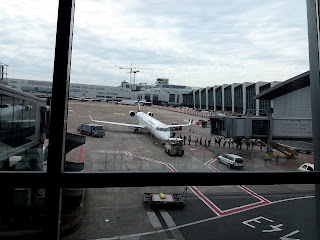 After one hour and a half I finally arrived by plane from Bruxelles to Munich It was probably the shortest flight of all group members, but the fact that I had to take a train in the Munich airport to pick up my suitcase and then taking the Lufthansa shuttle to the Main station and then a taxi to the hotel I arrived 2 hours later as foreseen and missed the group which had gone to visit Munich.

I was so tired that I was not hungry took a shower and went to bed. I had no clue who my room mate was, as single travellers share a room with another single. In the morning I woke up and saw a shape under the blanket but couldn't figure out if she was tall, short, blond or black until we both were awaken looked at each other and laughed a good morning. It turned out she was an Australian lady. For the whole trip we shared a room  without any problems. With my earplugs in my ears (I am used to) I didn't hear her snoring and she pushed me if sometimes I started to snore. Happens in the best families !

The rest of the group I met in the morning at breakfast. I was the only European with the tour leader and English girl from Oxford. All the others came from different continents. Canada, USA, Australia, New Zealand, Filipinos and from the Caribbeans. Really a mixed bag ! Despite our different origins we had no troubles at all with each other, after a few days we became a big family and it was absolutely nice.

As I always said since I am blogging from wherever we come, we all have the same joys and worries. Maybe different breakfasts, but otherwise we all liked the same food which is different but delicious in these Eastern countries who were under communist regime for such a long time which means until the 90th ! 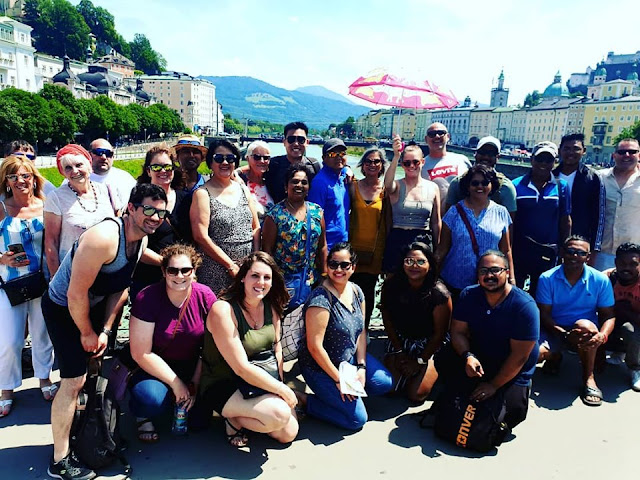 This is our group, young and old we are all mixed together 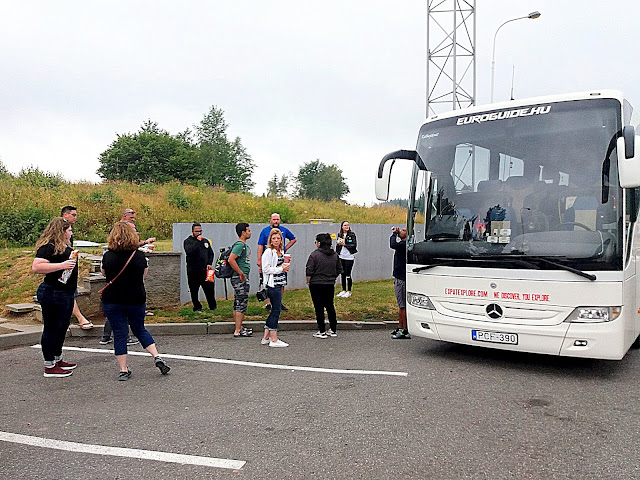 Here we made our "comfort stop" which meant all two hours the bus stopped and we could go out and walk around or buy something to eat and drink. 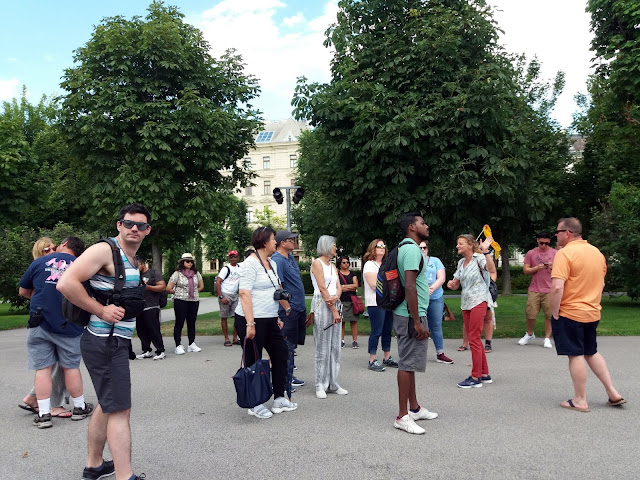 The guide we had in Vienna was the lady with the yellow flag. She was the best for me. She explained very well, was full of humour and didn't run as if the devil was behind her, as the other guides used to do and unfortunately ours too. Everybody complained to each other but nobody dared to say something to our guide, except me of course. It was not a walking tour anymore but a marathon running tour, with me always at the end, because I wanted to take pictures.

Fortunately we had a lot of free time where I could go back or take a sightseeing tour which I did in Budapest.

But I was very well taken care of, if our guide walked like a robot and never looked back if we were all following, a good soul showed up and showed me the direction. There was always a man who carried my suitcase up the stairs when there were stairs to get to the reception. Everybody was very friendly, polite and kind. 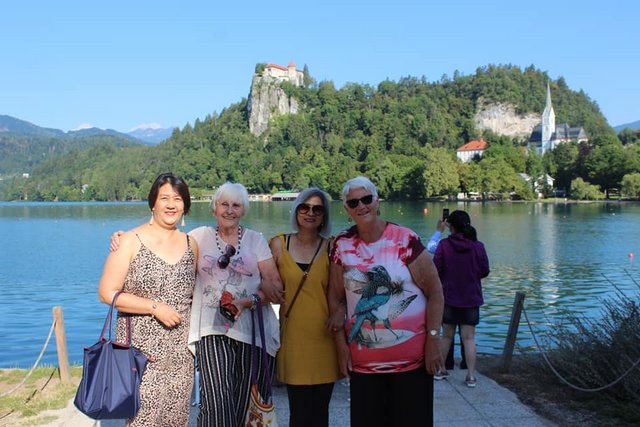 We  were often exploring together. The first came from New Zealand, me from Belgium, Los Angeles and my roommate from Australia.

When the tour was over it was very hot in Salzburg, but then when we arrived where we started in Munich in the rain, it rained again !

After breakfast we disappeared in all directions to get home and now ... we meet each other on Facebook !

That was nice to have a friendly bunch of travellers.And you had an Aussie room mate. Shame about the guides walking too fast.

Time to rest and reflect now. Always good when you get on well with your room mate.

Glad you got on well with everyone and had so much fun. Looks like a wonderful tour.

-smile- In photo #4, on the left side, did you notice the PDF??? (Public Display of Affection) -smile- Were they part of your group?

NO, a marathon is not what you signed up for, I am sure. And those guides should have been complained about. The company which sells these tours, should know, these facts.

Such a wonderful experience! Sight seeing was one part. Making friends from all over, was another.

Blogging is not face to face. But we certainly do meet people, whom we would never meet, sitting in our own homes. And it is wonderful. Look at me! I now know you. How else would we have met???? But for blogging!

Quite a trip to make!

Sure hope you enjoy the trip and meet some lovely people, sure you will.
Coffee is on

That's how it is : single travellers in a group pay more and get less.
All in all you had a wonderful trip! I wish you many such trips in the future!

Brilliant you made friends and that you enjoyed your roommate...that must be a gamble. (My traveling companion was mostly OK, LOL)

Glad you had a good time and got on with your roommate. It looked like you were definitely a mixed bunch of people and quite a large group.