Another week went by, meanwhile I recovered a bit from my flu but I am still not running at 100 %. Mr. G. stayed in hospital until Wednesday, as he was not yet ready to be transferred to the rehablitation center. He was confused which worried me a lot, he thought he was at home or somewhere outside and asked me what I am doing here etc. Fortunately that was only one and a half day, but the doctors reassured me that he will get to normal again. And he did !

The next day he was transferred by ambulance to the outskirts of the city Wavre 20 km far,  where  he had to start his reeducation.

I followed later with Isabelle to bring him clothes and what he needs to also go outside. 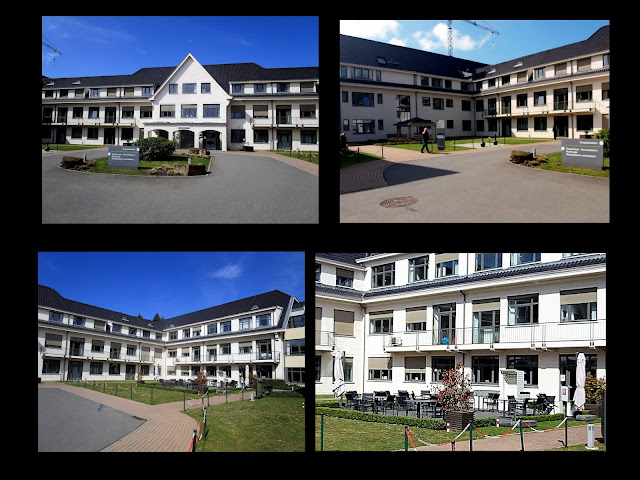 It is a very modern and beautiful new building, and behind is a wood. Besides his room which is big with a bathroom, table armchairs and everything he needs I haven't seen anything. I have to say that the public health care in Belgium is real good. There are only 2 bed bedrooms no more or single rooms. Not like 50 years ago rooms with 6 beds or so. The personnel was so friendly and the responsible for the kitchen came and showed him the menus for the whole week and asked him what he likes and what he doesn't eat. Then the social assistant came to wish him all the best and if he has something to complain about to ask her. I don't think that there is something to complain !

When I came home I was exhausted but relieved and thought the worst is behind me. 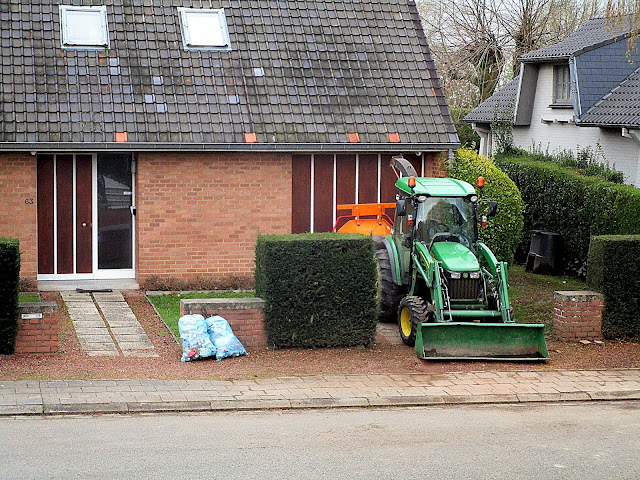 Looking out of the window this morning I was surprised that Isabelle had changed her car ! It belonged to the gardeners who had to cut 4 trees ! 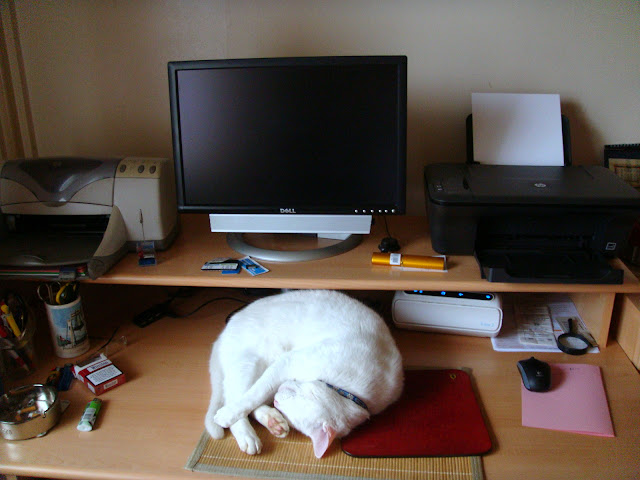 Poor Arthur misses Mr. G. very much and keeps an eye on his computer. Especially at supper time he is so disappointed not to get "junk" food !


PS I am sorry not to be able to answer your comments, because of the actual situation
Posted by Gattina at 11:52

It looks like really nice rehabilitation center. Sounds like people there are very nice, too. I hope Mr. G will make quick recovery and come home! Arthur will be so happy :-)

So glad that the medical facilities are so good where you are. Hopefully you are now on the mend and Mr G will be recovering quickly under the good care.

wow, it sounds like a rough week. I hope you have fully recovered from the flu. The healthcare sounds great in Belgium so I hope Mr. G makes recovers and can come home to Arthur. Arthur looks cute curled up in front of the computer.

So glad you're feeling better - hope you're 100% before long. I'm sorry Mr. G. still isn't home, but glad he is in good hands. I hope and pray he has a good and quick recovery. Poor Arthur.

I hope all runs smoothly with his recovery. Arthur makes for good company in the meantime.

Sorry to hear that you haven't been well and that Mr G has been to hospital and rehabilitation. Sounds like you have been having a bad time. I have got over my bad beginning to the year I hope you two do too.

Glad to know the Health Care System in Belgium is friendly and reliable. I'm relieved to hear that both you and Mr.G are feeling better. Hopefully, he'll soon be home, and the bad time left behind.

You must be very relieved to know he is in such a nice place and getting good care. I'm glad you're feeling better too,

I have been thinking about you and "Mr G". I'm so glad you found a good rehab center and of course hope his full recovery continues speedily! Don't forget to take care of yourself too.

Oh I am so sorry that you've had the flu and to hear Mr G ended up in hospital. Sorry, I've been a bad blogger and missed so much. I didn't even know who Isabella is. The rehab center looks very good and I'm glad Mr G has given up smoking. I'm going to be more handson as a blog friend from now on. Take care. Jo