This week seemed to me just like one very long day. Since Monday I am carrying myself from sofa to bed and the other way around. I had fever and felt so weak. On top of that Mr. G. had fallen out of his bed (again) but this time had broken his hip and was in hospital. No way to talk to him on Monday they must have given him medicine to knock out a bull he didn't answer the phone.

The nurses told me that he had spent an agitated night and had twaddled all night. But he does that also often even if he is "normal". This time it came from a very high fever. We could only wait for the fever to go down so they could fix his hip.

Each day I called first the nurses to get his news as I couldn't go there in my state then I called him, when he answered he thought we were in a train and wondered if it was the right on. I left him in his train and hoped for the best. My neighbor brought him things he needed and did the shopping for me. She is such an adorable girl and a nurse too. Yesterday and today when I called him he was his old self and I was so relieved. Having a crazy husband is the worst which can happen. So it seems that I don't have to follow him into the train or do some shopping in the supermarket.

As a united family my son had caught the flu too and had to stay home. Only the cats seem to have escaped !

Today he was finally operated and I got the first news in the afternoon. Everything was OK, there were no problems and he is now in a room to wake up completely. My "nurse" was there and did everything for me and now we have to wait until the Weekend is over  when he will be transferred into a rehabilitation center. The worst is over !! I hope that my flu will be gone by then. 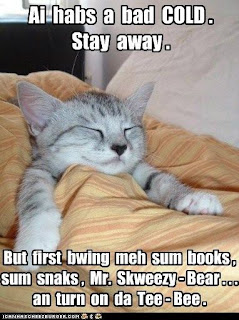