When I think that we will enter 2019 and that it is already 18 years ago that from one day to another I went into another century ! The last person I know who had this chance was my grandma. She was 6 years old when from 1899 she arrived into 1900 ! And then me. Both of us if I think had a lot of changes and inventions in our lives. She unfortunately had to go through two WW, while I was lucky, I was born in the century of inventions. From washing machines to bread baking machines, from travelling in trains and then being able to buy a private car which only had been possible for rich people.

What is new in this 21 century is that we are not going "back to the future" as in the movie but far more to the past. We want to grow our own vegetables again, only eat organic or bio, and after having been forced to use plastic for all kind of things, now we are told that it is not good and spoils the environment.

This last weekend 2018, was grey and humid and foggy in the morning. The market in Waterloo had only a few stalls the others didn't even come. It was the same in the next little town where a lot of stalls were missing too. The boutiques were closed, although they had a special permission to open on this last Sunday, but anyway nobody would go shopping because Sales start on January 2, and of course nobody wants to buy anything for the full price if 2 days later they can get the same thing for half.

We were all hanging around and rather lazy finally Nicole had the good idea to hang around together and called two other friends so we were four to share a good fruitcake and coffee. For all of us the year had been rather good, except for two who had some health problems. But there were no family problems.

On Sunday I thought the sun would come out and went to the market but as there were only fruits and vegetables for sale and nothing else I returned home after half an hour.

The rest of the day I spent with phone calls to wish a happy New Year to those who live far away or I haven't seen for a while. For some the year had been very bad for others good.

Now I will see what this year brings ! 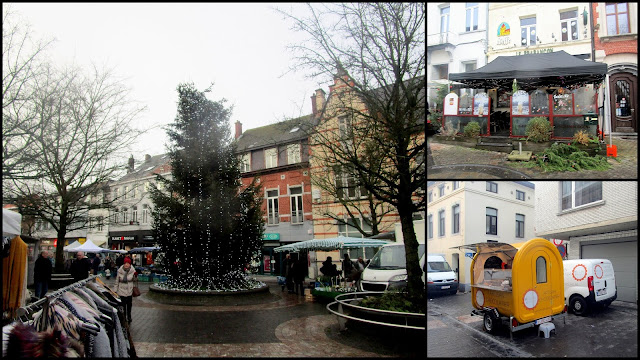 The market wet and empty !


To all of you 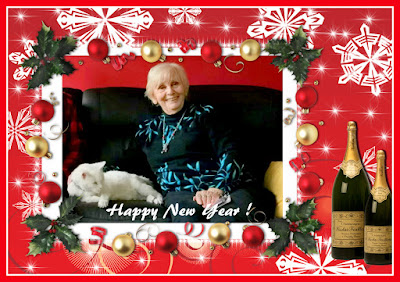 Lovely New Year greeting card!
Yes, it seems we're going back to past and not only in terms of nutrition and plastics replacement.In fact, to survive we might have to go back to basics. Who knows?
Hope New Year brings us all good health, joy and prosperity!

The farmers market here took last weekend off, and might do the same this weekend. Over the winter there'll be less vendors inside than there were during the Christmas markets.

Glad it’s been mostly good year for you and your friends and families. I had health issue myself but am grateful that my family is all well. I wish you a very happy and healthy new year!

Happy New Year to you! It's been very quiet here too. Our roofers could not work yesterday due to the high winds. I hope they will come today and finish the job!