This morning when I woke up and looked on my alarm clock it was a quarter past eight. I thought that's a bit early I stay in bed until 9, but it was impossible so I got up. It turned out that it was 8 am and not 9, because I had changed the hour on all clocks and watches etc in my room except the alarm clock !!

Now that the garden is cleaned up, the flower pots look awfully empty ! 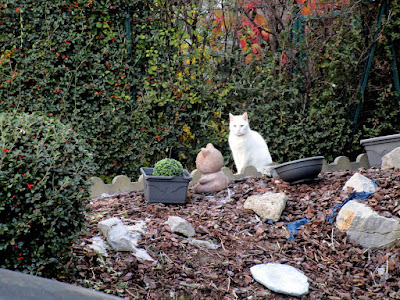 Although Arthur tries to decorate, the view of these empty pots were depressing ! 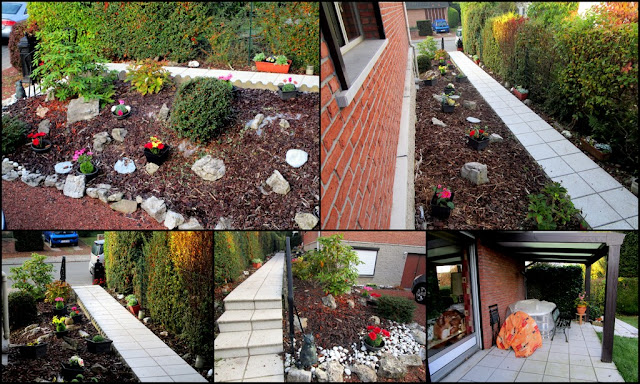 There was only one solution, fake flowers ! I bought some and put them in the pots and now at least the front yard looks cheerful and I don't mind what people say, even if there is snow on the flowers ! It's a miracle of nature I would say ! On top the fake flowers are so well made today, that Mr. G. even watered them when I was away ! This took me a part of the afternoon. 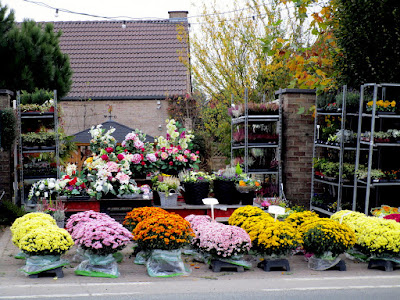 When I went shopping, I saw all flower shops with an enormous choice of mums in all colours. The  use in Belgium is to rush once a year at All Saints day to the cemetaries clean and flower the graves and then they are in peace for another year. This rush is so terrible, that there are scheduled visit hours because otherwise there would be too many people at once and at some cemetaries the police has to watch over the circulation !  I personally don't like this use at all, I think you can go to a cemetary also during the whole year. Maybe some do. My neighbor has 5 cemetaries to visit and take care of, all over Belgium (fortunately it is a very small country) and she is already underway since two days. There is the husband, the parents, the uncles and aunts etc.

At the same time there is Halloween, but not celebrated officially. It moved into schools and some children participate. 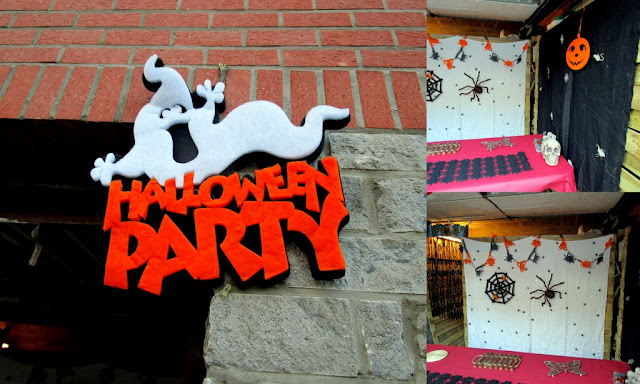 Driving direction center I saw an open garage door with some Halloween decoration, probably for a party. That's all I saw. 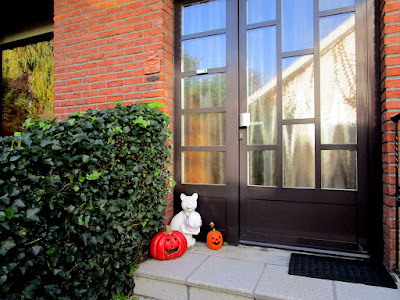 I had put a little decoration at our front door, in case children come and ask for trick & treats ! As there are some Americans living nearby it is possible !

We have spring weather ! In the afternoon 17°C !! Imagine end of November !

Cafés had taken in the chairs and tables which stood outside, but due to this warm weather they had to put them out again ! Many people were sitting on the terraces, enjoying the sunshine !

Sunday morning I went to the market in the next little town, Waterloo market has Waterloo prices and  everything is more expensive. There were a lot of people, and a lot of mums, and they all had the arms full of these flowers. It was a beautiful sunny day to go to the cemetary, usually it always rains.

I found a nice blouse for my forthcoming holidays in Egypt, and it was a nice feeling to buy a summer blouse in November !

Nicole and I met later to go to the movies and see the last film "Bridget Jones Baby".  I had been told that it was very funny, so we decided to go. I was a little reluctant, often when the first film is good the second is less and the third mostly pulled by the tail together. But this time I wasn't disappointed at all, the film was absolutely great and we laughed from the very beginning until the end. I have to say that the actors are also all excellent.