Our peaceful vintage life was interrupted this weekend by the visit of son and grandson ! They arrived late Friday evening from Amsterdam 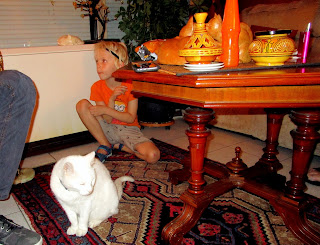 Our cat Arthur loves Toby and showed how happy he was by chasing his tail ! 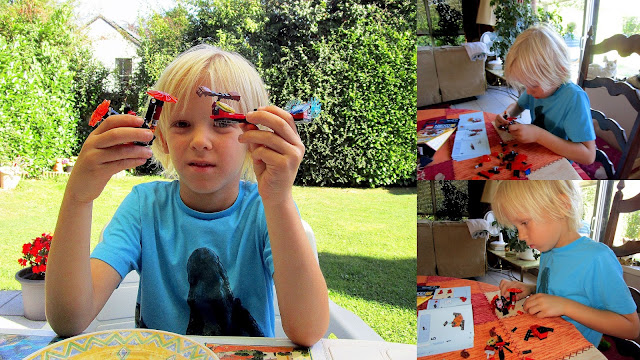 Mr. G. had won some money playing Whist and had given it to Toby. He of course wanted to buy another Lego (he could open a shop by now) and of course a very complicated one for age 8 - 18 and he will be 6 in November. But assembling it took no time, Suddenly it was finished ! 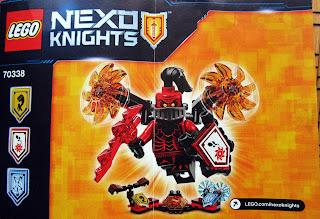 That's the piece he assembled ! 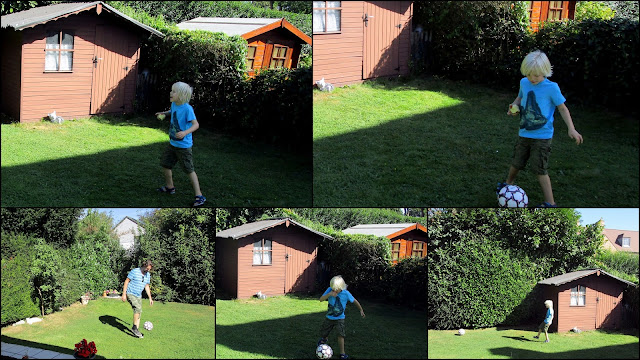 As the weather was so nice he played with Dad football (soccer) in the garden.

After lunch we went to the Waterloo park  where the yearly farmer's fest took place. There were lots of activities for children and Toby had to try them out ! 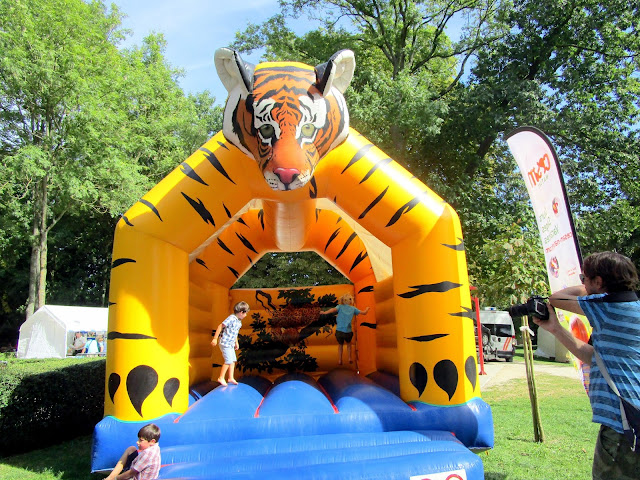 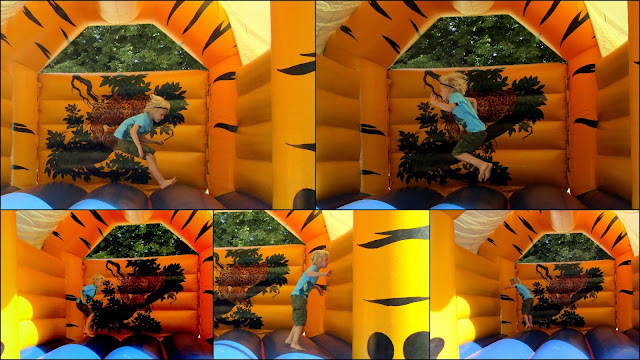 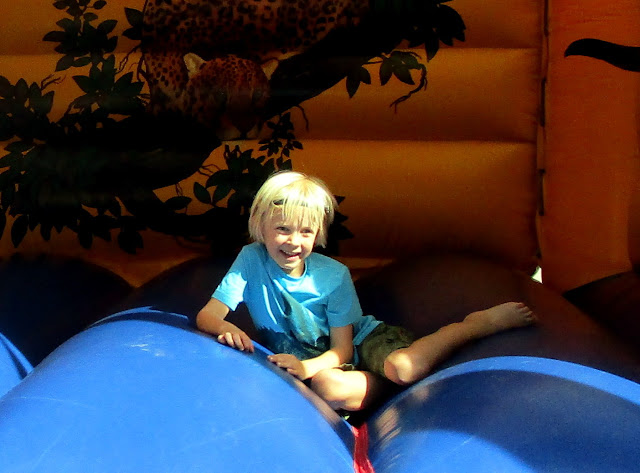 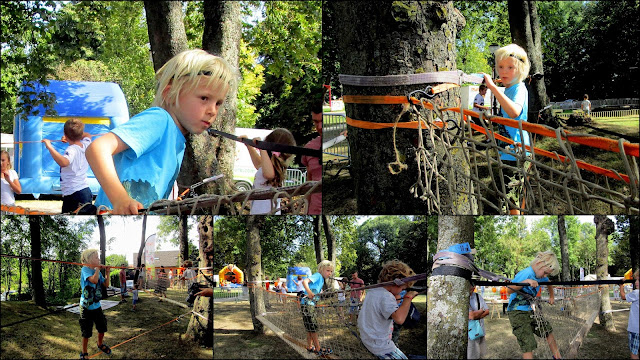 Then climbing, the elder once could climb up high in the trees 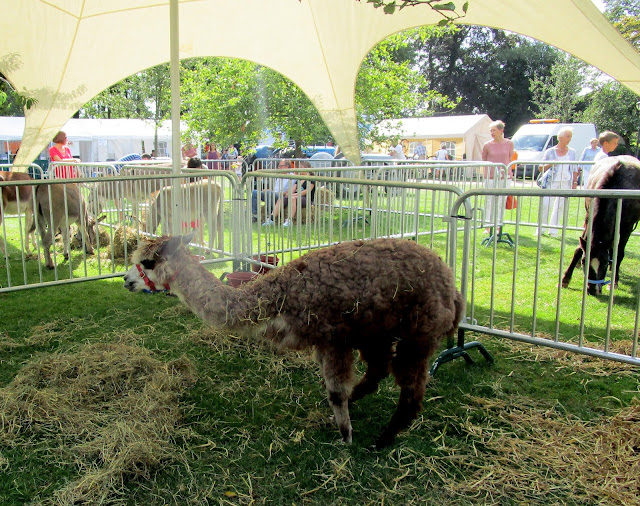 Observing with interest how a llama did a poo, I also learned something, didn't know that it was like a rapid poo, 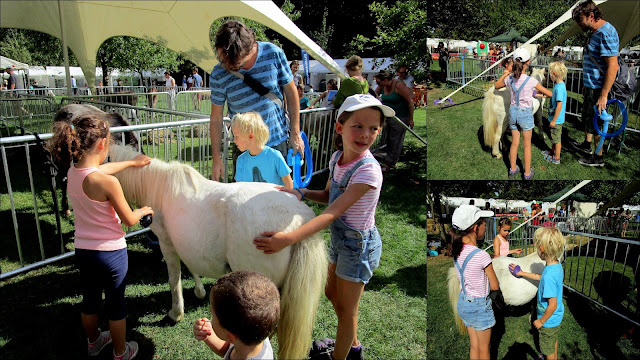 Then he brushed he Poney, 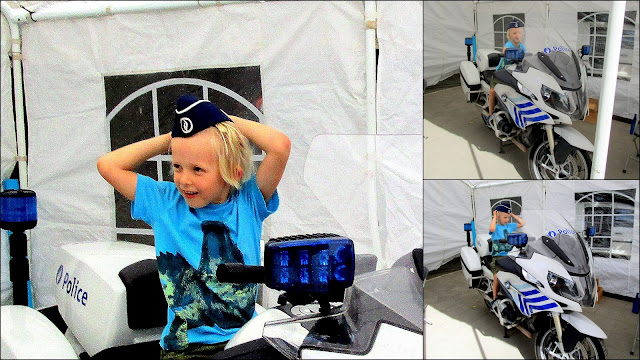 and before we left a very friendly policewoman, sat him on her motorbike ! Was he proud !

Then I returned home and they both went to a birthday party to my son's friend, where they stayed over night, as otherwise son couldn't drink the good beer or wine !

On Sunday they came back for lunch. The weather was bad and it rained !  While our son made a little siesta, Toby also to rest a bit watched Television 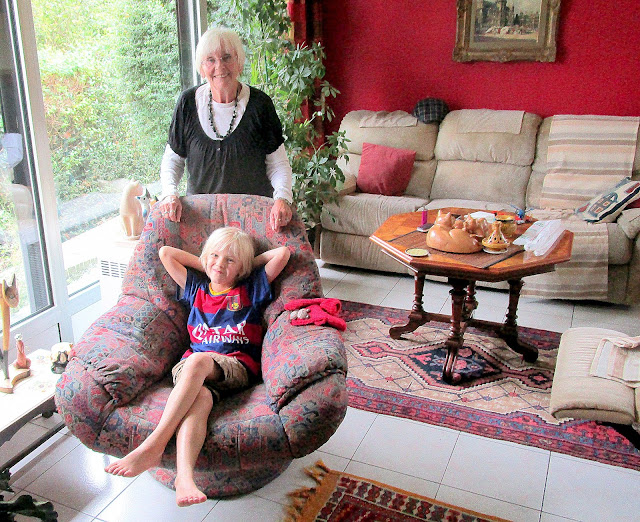 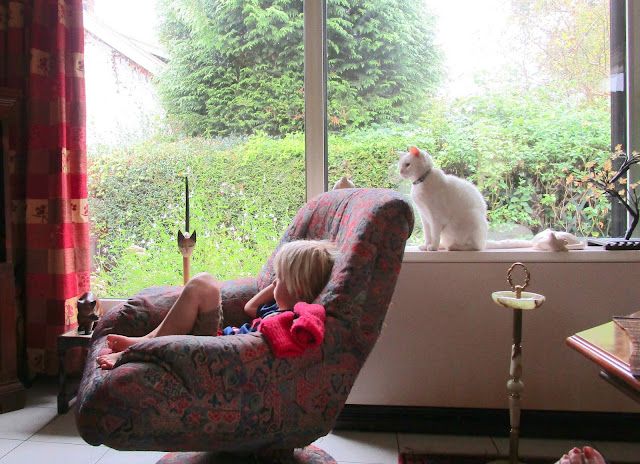 and of course with Arthur, always present. 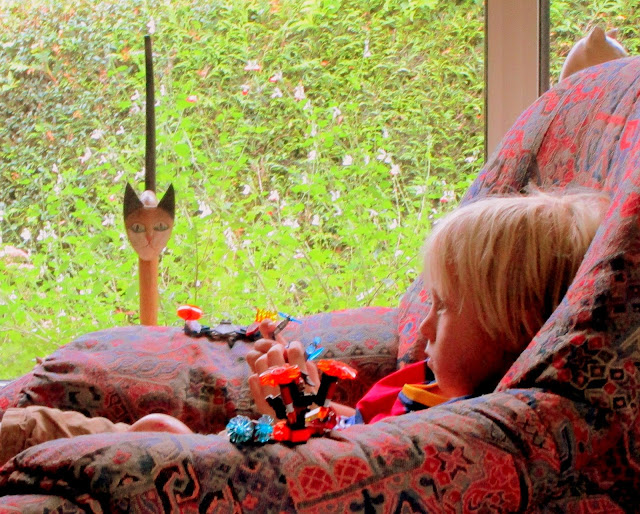 The new lego models had to watch too.

Originally it had been foreseen to go to a Medieval Festival, but with the rain, we preferred to stay home.

Only too soon it was time for them to return home to Amsterdam.

And we returned to our vintage life !

Hi Gattina - lovely to see the family photos and to see Toby on the police bike - fun ... cheers Hilary

Sounds like you had a lovely weekend. We had the rain on Saturday but yesterday was lovely so I hope the sun returns to you today.

Tiring, I am sure, but great to see your family too. My goodness, look at the photo of the two of you with him sitting in the chair. You look so alike, right down to the nose.

Wow, Toby is really skilled at building Lego.
Love his pictures on the motorbike!

Toby is growing so fast and he is so cute.

Toby is growing up so fast. That festical was just perfect for him to run off some energy.

It looks like a good time was had by all!

Sounds like a wonderful weekend, always nice to have family visits.

You certainly had an active weekend with your grandson. I'm sure you enjoyed the visit and Toby's company.

It's always good to have something interrupting everyday life!

Nice weekend -- Its nice when they get to the age when they can rest and watch TV and don't have to be entertained every single moment (nice for grandparents). I think your grandson is a Lego genius! I remember going to our daughter's when their kids were around that age and not being able to get through the living room without walking around a lego build (or worse, stepping on a piece that had got away).