1. Monday was the first day home, after my holidays in Turkey. As always when I come back, I need some time to adapt to routine life again. It was very sunny and hot, but very humid, everybody was happy after one week of terrible rains and floods. I of course had escaped this week !

2. I left my suitcase unpacked and instead started to sort out the pictures I had taken. Unfortunately I had an appointment with my gynaecologist in the afternoon, for the yearly check up. Mr. G. had filled the fridge so I didn't even have to go shopping.

3. Finally I pulled myself together, unpacked my suitcase tidied up the house a bit and spent then the afternoon outside on our terrace. The gardener came to trim the bushes all around, but he only did half of it, because it was too hot and the poor man was in full Ramadan and not allowed to eat or drink. At 4 pm it started to rain a bit and then we got terrible thunderstorms and rain. I had to go inside although I was sitting under the pergola, but the lightnings approached ! The water was running down our street, like a river I had never seen that in the over 40 years I live in this house !
Of course there were lots of damages, electricity cuts etc. We had nothing fortunately.

These pictures were in our local Newspaper and show the streets around my area. Fortunately hour house sits on the top of a hill !

4.The next day the sun was shining again and the poor people could clean up their flooded houses. It will be a huge bill for the insurance companies !

We had the visit of Mr. G's young friend Chris, whom I always call our adopted son (they have nearly the same age). He came at 2 pm for an hour but at 5.30 pm he was still there, we sat in the garden and watched Oscar the lawn mower robot working, Chris had never seen that and was really captivated, we had to laugh, sitting in the garden and watching a robot ! We chatted a lot and he asked for some advices which only a woman could give him, that's what he said, I did my best.  It was a very nice afternoon.

5. I went to my painting course and it was nice to see the girls again. I started a new pastel painting. As usual we had a lot of fun ! The afternoon I spent sitting in the garden, it was nice and warm, cat Rosie was running behind a butterfly but without success. Instead I found a half eaten mouse in the living room ! I wonder if she wanted to contribute to our supper ! 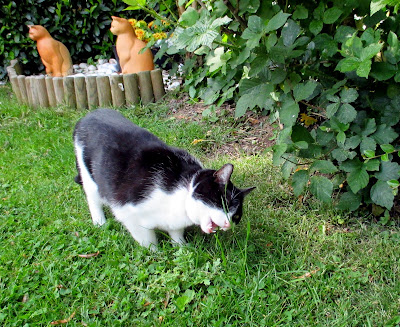 After the mouse meal she had to eat some salad to digest and I had to get rid of the left overs !

Rain and floods here too. I sold my lake front house just in time.

Hi Gattina - the weather has been terrible in places ... we haven't had much - but the storms were along the coast Bexhill way ...

Cheers and have a good weekend - Hilary

We did not hear of floods in Belgium. I guess not quite as bad as elsewhere in Europe. I would find watching Oscar quite fascinating too. My mind boggles at the question and the advice you gave Mr G's friend.

That's a pretty bad flood in your neighbourhood. Glad you are safe and no damages to your property.

We are expecting 2 extremely hot and dry months ahead in Singapore.

Sounds like it was really bad thunderstorm. I'm glad your home was OK.
I'm sure Rosie's half eaten mouse was a gift for you! But I wouldn't take left overs, either :-)

Very glad to know that your house is on the hill. That was some serious flooding.

Very glad you had a nice vacation and relatively easy adjustment back to the routine. It's great your house is on a hill and you escaped flooding and power outages.

I see you are taking on the role of 'Agony Aunt'. The storms were terrible but isolated so we also avoided the worst.

It's always nice to come home after being away, isn't it? I think the half mouse would make me come undone:( Those floods look awful, poor people. I'm glad you are well.

Oh my...that's a lot of rain flooding the streets. Hope everything is fine by now. Hope your time in Turkey went well.

I'm glad you weren't affected by the flooding. Clearing up after that must be awful. Cats can be such lovely animals sometimes! But of course it's only what comes naturally but not pleasant to deal with. We have had torrential rain today but now the sun is shining!

It's always hard to get back into the swing of things when coming back from a holiday but glad to see your priorities were in order...pictures, then unpacking. How awful about the floods. We had that a couple of years ago and it's not fun.

Oh my gosh you guys got hit. I trust the water is going down.
Glad everything else went well.

Your weather sound a lot like Texas. Flooding and heat and humidity! I can't imagine that poor man trimming bushes outside during Ramadan when he can't eat or drink!

Poor little mouse. The weather is absolutely crazy. I've given up trying to understand what it's up to.

That's the good thing about living so close to the sea (and up a hill): all the rain runs straight into the sea. No flooding, apart from very local bits.