This weekend we had the visit of our son and grandson. We hadn't seen Toby life since April, only on Skype and I was surprised that he had grown so much ! He is not yet 5 but has the size of a 7 - 8 years old boy. They arrived Friday late evening. 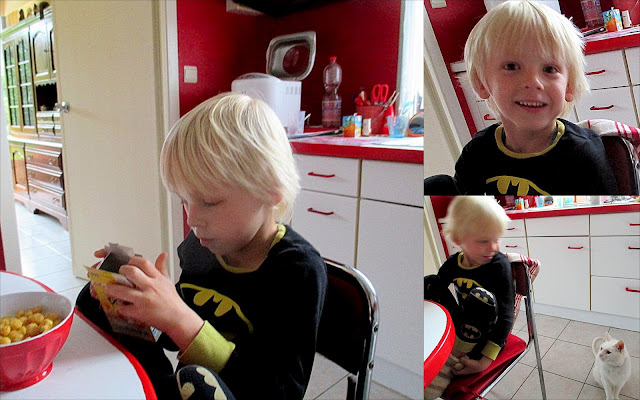 Next morning we had breakfast watched by cat Arthur who always hopes that something falls from the table ! 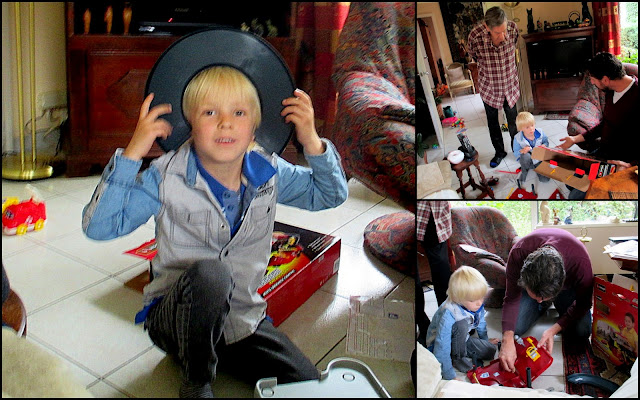 Mr. G had bought a garage for Toby and the three generations were busy to assemble the whole thing. This took quite some time. After lunch they went visiting some friends and we watched TV a bit. 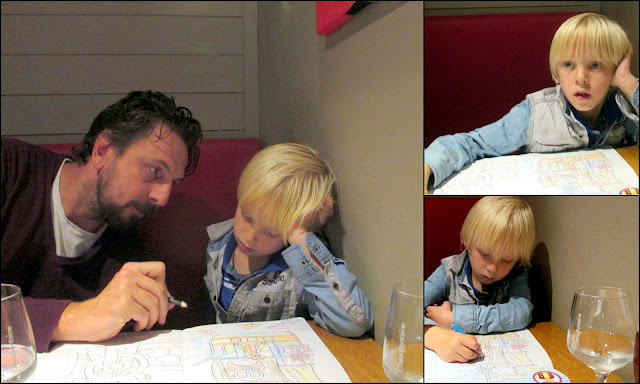 In the evening we went to a restaurant, which had delicious mussels, that was perfect for me the men had steaks and Toby as all children Spaghetti ! I had taken a drawing book and colored pencils with me, so the waiting time didn't seem too long. 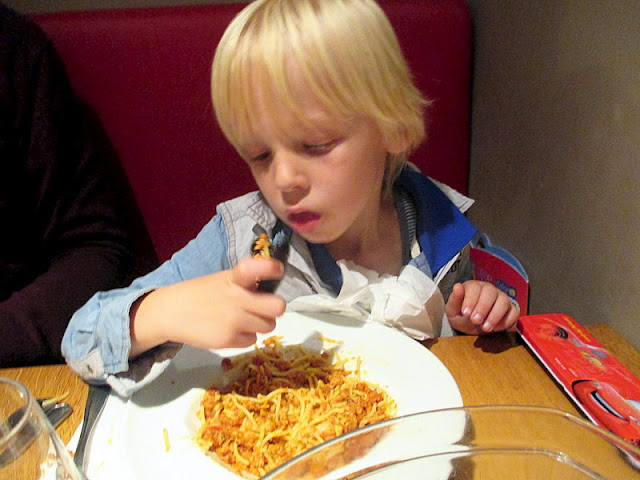 I gave him one shell and he ate his spaghetti with the shell which of course was a lot of fun !

On Sunday morning it was cold and rainy, no way to play in our garden.  But there is the "Kid's factory" a covered playground nearby. So the three of us went there. But before we had to fill in his "Friend's book" ! 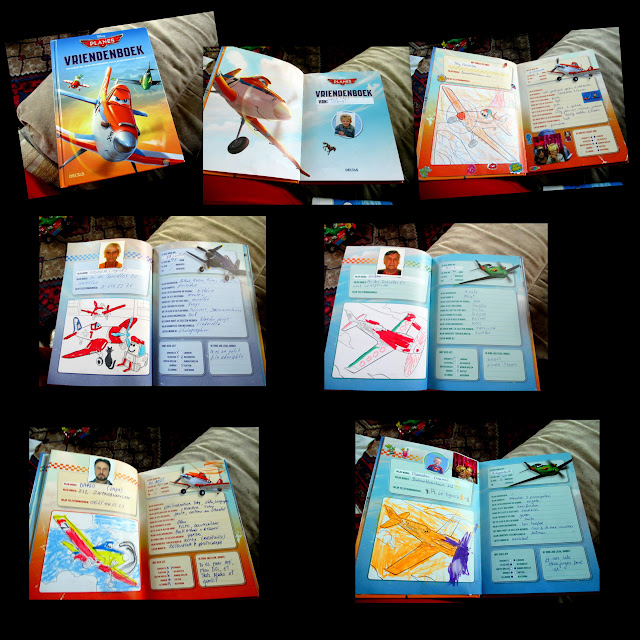 Mum, Dad and friends had put their photo in there and had filled in a questionary. I found the one of my son, and he found long forgotten school friends in it. 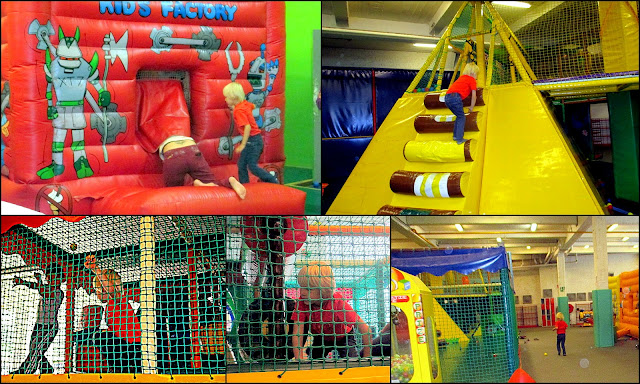 In the Kid's factory, Toby had a lot of fun ! 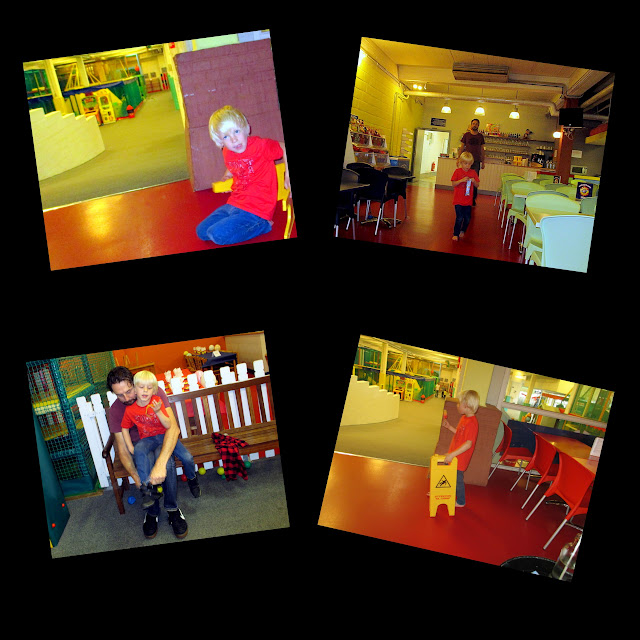 He had an ice cream and we a coffee while he was running and playing around. 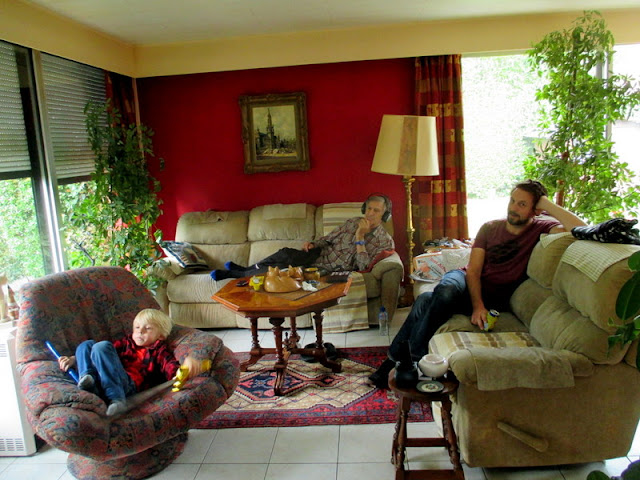 In the afternoon the three generations watched Formular 1 and I answered comments ! Then it was time for them to return to Amsterdam, Toby has to go to bed early, tomorrow school starts again.

We rested for the rest of the day, and all cats showed up again,  Besides Arthur they are not so keen on visitors !
Posted by Gattina at 06:30

Gosh Toby has grown so tall. It looks like you had an enjoyable visit. How long has Toby been at school?

A very busy weekend....Your kid is really grown a lot!

Toby looks quite different now - quite the young boy. Your weekend sounded very energetic maybe it was just as well that Formula One was on TV. I am finding keeping up with blogging and posts hard at the moment. Never seems enough time in the day to do everything I want to do!

Toby might be growing fast but it seems Arthur has not forgotten him.
The Kid's Factory looks fun.

And Grandma and Grandpa slept very well that night as they were quite exhausted.

Wow, Toby is far taller than Joel who is almost six already. He's a good-looking little lad. The family restaurants in SA have play areas (like the kids factory) in a corner and the parents can watch on a CCTV while sitting at the table. They also have coloring pictures and some crayons in bottle. But you were a good granny to take yours along. I bet you slept well last night!

Hi Gattina - Toby has certainly grown hasn't he .. and now looks almost like a teenager. But you did lots - and it was obviously a fun visit ... the Monza Grand Priz wasn't bad - good for the Italian Grand-Dad ... and good for the Brits ...

The weather looks like it's going to be nice for a while - an Indian summer ... just hope it lasts for a few weeks!! Cheers Hilary

I bet Grandma every chance she get spoils Toby...Isn't that what Grandma for.

Such a handsome boy! Yes, I think with all the tall people in his family, Toby will be very tall! Was your son a blond as a child? We are all dancing on clouds right now with happiness for Amanda. And a boy, too! Still no name, but I know they are working on it!

My goodness he really has grown! And it looks to me like he is as smart as a much older child as well!