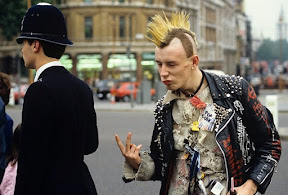 The first punks in my life I saw at the end of 1980, far later than in other countries. Belgium for new provocative youth things was always a bit late. To me the punks looked awful with their colored cocks comb, but on the other hand I thought my generation had terrorized our parents with the rocker looks !

But those I saw on the street, were mostly there to annoy women or elderly people and had fun to see their fear. Amongst the friends of my son there were no punks, but he was in a "Jesus" look phase and let his hair grow until his shoulders, which when I saw him in the dark with his length of 2 m (6.6 f) frightened me more !

One day I was in a pet shop to buy cat food. Suddenly a terrifying punk approached me, with a green cock comb, nail covered leather jacket and other accessories. On his shoulder sat a rat. He came very close and bent his shoulder so that the rat almost touched me. Unfortunately for him I am not afraid of rats at all and instead of screaming and running away, I petted the rat and told him what a cute pet he had ! The rat was delighted the punk not at all, I have rarely seen such a disappointed look ! I smiled at him and went away to buy my cat food. The punk left the shop with hanging shoulders,  while his rat tried to climb on his head.

Another of your wonderful stories.

No hope for me, I'm afraid of punks and rats. Love the cartoons.

I loved the punk movement and punks were harmless. What scares me now is ice users.

As always you tell a story sooo well. I didn't know any punks and my children didn't have punk friends. I remember them as anti-establishment, anti-authority; in fact anti-everything. OH MY WORD ! I wish I had been there when the punk tried to frighten you with his rat. I would have stroked the rat as well. He he . Your cartoons are spot on, especially the second one portraying the selfishness of the punk! Thanks again for a good laugh!

that is definitely a 'punk' ~ great post for P

artmusedog and carol
Have a great weekend

Hah! Great post, I would have about died if confronted by that rat!

Crazy colored spiked hair and tattoos all over don't bother me a bit... but that rat would have!!

I'm not afraid of mice, don't think I've ever been close to a rat (the animal kind anyway).

You'd never catch me petting a rat! He would have enjoyed my reaction.

Love that you spoiled his fun!

Love your story! That kind of punk is what I call a bully.
The View from the Top of the Ladder