I went visiting Marianne in hospital. When I saw her I was shocked. She looked like a living skeleton, only bones with some chair around. like a concentration camp escapee. Apparently she was strong enough now, not to be happy to be alive, no, she was very furious and angry that she had been saved and complained all the time pitying herself. I quickly noticed that she hadn't changed except she was worse than before. She terrorizes the nurses, and insults her husband who comes every day with a little paper  in his hand to find her room. He had lost a lot of weight and didn't recognize me,  his Alzheimer had gotten worse.   Apparently the whole time she was in bed and had tried to starve herself, he only had eaten some bread. (See post below) She didn't even say a single thank you that we had taken care of her dog. After half an hour I had enough she only spat poison. These persons are so egocentric and selfish, there is nothing to do. Help is not even wanted ! I certainly will not go back to see her again !

When I got out of there, I had to breath some fresh air ! How terrible to end like this and become a nagging, mean old woman. 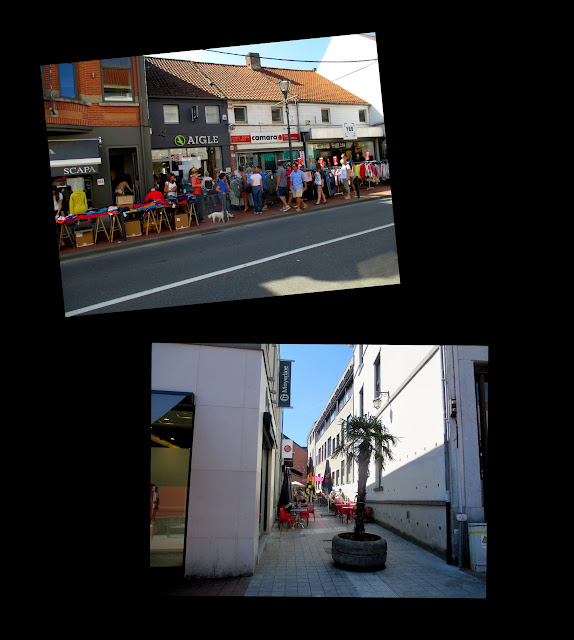 To comfort myself I made a little walk through Waterloo center,  where shops had started to put out things for the jumble sale next day. I found a nice cardigan in a boutique to a very cheap price and returned home. 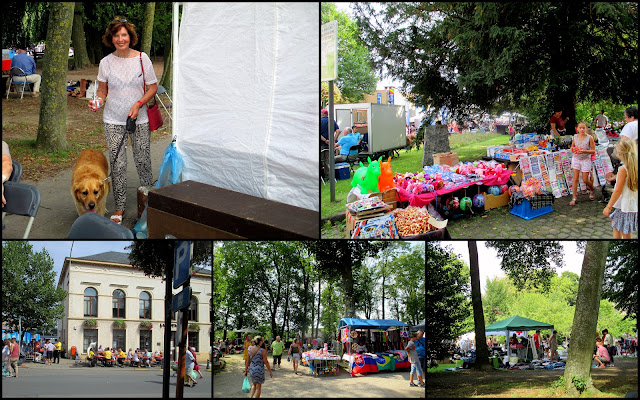 On Sunday was the big jumble sale in the Waterloo city park. People had emptied their attics and basements and had displayed them for sale. Nicole, Charlie and I walked through the stands, we didn't find anything to buy. So we sat under the trees at a table and had a glass. It was very hot, but fortunately a little breeze refreshed the air. We met some people we knew and chatted together. It was a nice relaxing afternoon. Then suddenly dark clouds showed up and we quickly returned home before the thunderstorm started.

Morning Gattina
Where to begin? What a horrible situation for you all. Kiwi looks so adorable, thankfully she was spared and has a new life now. I can imagine you, Dearest cat lover, would have been tempted to keep her until the reality of four cats and a dog hit home.... not because of the extra work that a dog brings but because you would have had to have started a new Kiwi blog! If we had been closer, my Crazy Poodle would have been a good play mate!
Hoping your week brings you more joy than last week.
Hugs
Wren x

Such a sad story. I hope they continue to get the care they need, even if they don't know they want it! There is little that even the best of friends can do when things get to that point. Seems to me that one of the 'arts' we have to learn as we get older is how to cheer ourselves up - as the world seems fuller than ever with gloom and upset. Getting out in the fresh air usually helps me restore a positive perspective on life.

Thank goodness you and Nicole and Charlie had a respite at the jumble sale. And could get over your ordeal in the hospital. You did what you could and at least Kiwi is safe, so take care of yourself from now on.

I like the idea of a big jumble sale in the park. Wish we could have one here maybe I could get rid of some toys.

I love jumble sales, even if I find nothing to buy just rummaging around other peoples junk is fun. Did Charlie find something to buy? His company must have kept your thoughts away from the dreadful Marianne.