1. I brought my laptop to the shop where I had bought it to get it repaired, some of the keys didn't work anymore. 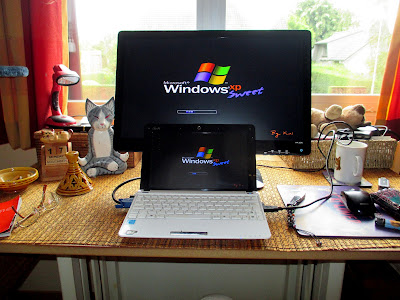 Mr. G. had the good idea to install a big screen connected to my travel laptop, so that I could  better see my pictures. It took me some time to get used to it, because sometimes I have to drag the program with my  mouse on the big screen. But now it works ! I have to wait 6 to 8 weeks before my computer will be repaired ! That I call a quick service. A snail in a race makes it quicker !

2. My friend Claudie arrived from the South of France fortunately on the last day where it was very cold. Poor girl was freezing ! After having dropped off her suitcase, we went for a drink to the Waterloo Lion. 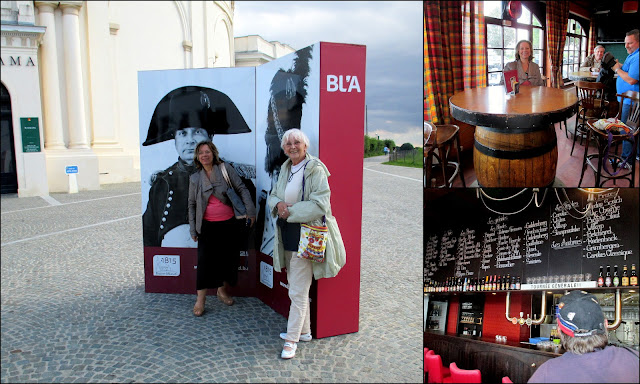 Unfortunately it was too cold to sit outside so we went to the Wellington Café and had our drink inside.
As Belgium has more than 2000 sorts of Beer, each time we have or had a drink she tries out a new one !

3. The weather got better and even the sun came out, so I went with her to Mons which is about 60 km from Waterloo. Mons became the European Capital of Culture for 2015 and there is a lot to see. 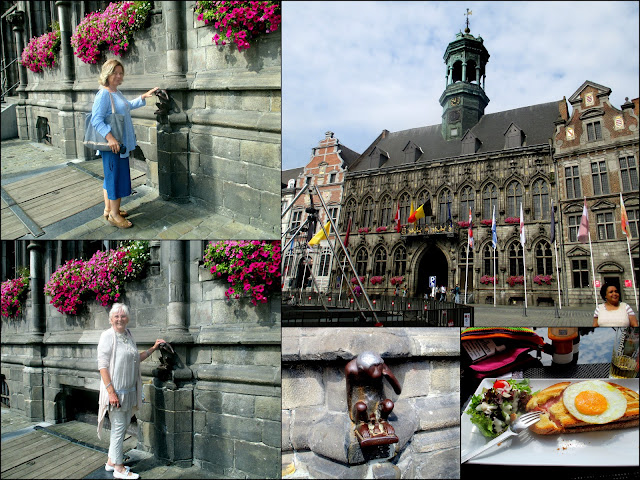 First went to see the little monkey  the emblem of Mons which sits just besides the entrance. You have to stoke its head with your left hand which will bring you luck and happiness. That's why its head is so shiny, because everybody passing by strokes its head. We walked around this beautiful place and looked at the city hall, before we sat for lunch on a terrace of a café and had a "Croque Madam". It is a toast with ham and cheese and on top sits a fried egg. It was very good. 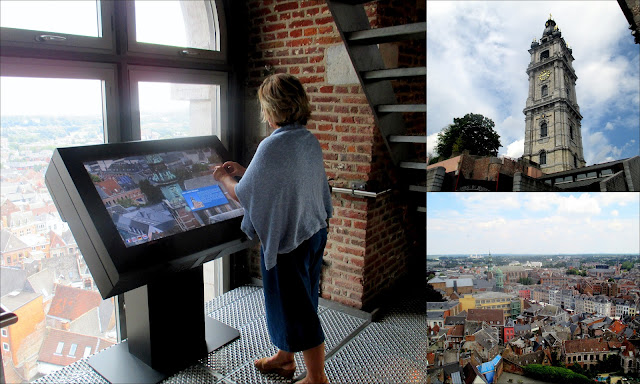 After lunch we went to see the "Beffroi" which is Belium's only baroque belfry and dates from the 17th century. We climbed up the hill which was quite hard, but then inside the tower there was a lift which took us about 60 m high from where we had a panoramic view all over Mons. Touchscreens were installed at each window and you could zoom on buildings and find a description.

Of course we wanted to see the house where the famous painter van Gogh has lived as a preacher before he decided to paint again. We didn't go inside as there were no paintings or furniture to see. It was a little outside of Mons and really worthwhile to see.

5. I wanted to show the nice Chinese Restaurant to Claudie so we had lunch  there. She was delighted ! We ate that much that we felt like two balloons when we got out ! We walked a little around in a nearby located park, sat on a bench and tried to digest ! 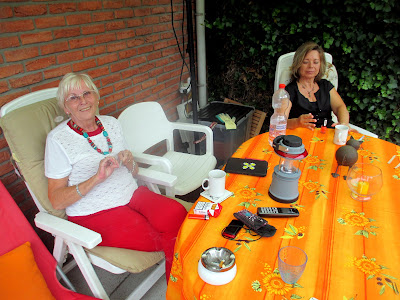 The rest of the day we spent on the terrace, and also did our fingernails. Mr.G. took the picture.

Claudie had brought us two enormous tomatoes from her garden ! 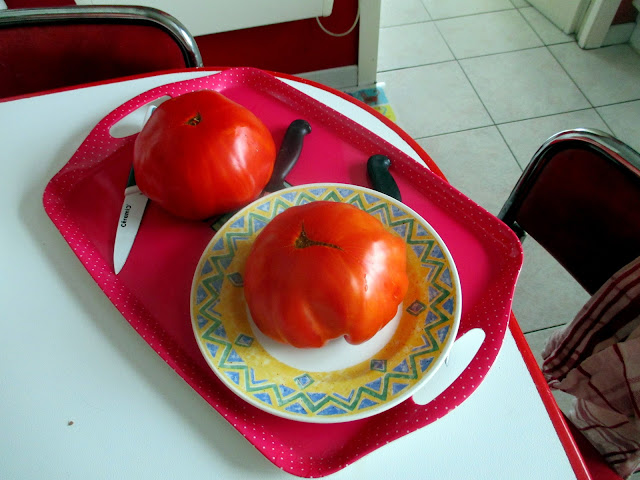 They were so huge that they  just fitted on the plate. We ate them for supper together with Mozarella cheese. They tasted delicious !

You always have so many interesting and varied places to show Claudie I'm sure you will never run out of things to do.
I didn't know van Gogh was once a preacher.

I'm glad there was warm weather for you and Claudie to enjoy. What a state of the art lookout you have over Mons.

What fun outings! The places to see there are so pretty. Glad you found a solution while your computer is getting fixed.

Nice tomatoes with Mozarella in the company of friends could not be a better conclusion to a nice day.

Glad to hear you're computer is getting fixed. The large monitor is nice. I love sight-seeing with you!

Those are some big tomatoes. I love tomatoes with mozarella, but I will usually eat them with sugar, since my body isn't too good with most cheeses.

Home grown tomatoes are the best. Those are huge monsters!! I'll bet they tasted wonderful! Looks like you had a lovely week with your friend in spite of it starting off cold. We had a lovely week until Friday where it turned crazy cold, 5*C, and it evened snowed in parts of the province! And now today it is lovely and warm again.

Oh my goodness. I have never seen such huge tomatoes. Mons looks like a beautiful place.

Ah, it's been so long since I visited Belgium. Perhaps I will find you and ask you to be tour guide! I love where you and Claudie visited and all the beautiful scenery, too.

I enjoy Croque Madam sandwiches. I went through a phase where I made them a lot on Sunday after church. Now I don't because I don't eat much cheese or bread. But I do have fond (tastebud) memories of them.

I didn't know that Van Gogh very wanted to be a preacher. I will have to look up that bit of his history.

LOVE your photos- it was fun taking a vicarioous hike with you and your friend.

You always have so much history in your posts. Love those photos of Mons!
I didn't know either about Van Gogh having been a preacher.
I hope your weather is a bit warmer this week!