1.The week started "nicely", not only the temperatures had dropped and it was rather cool, but also driving out of a parking space I hit a car ! I got out to see the damage and the driver who was a more than vintage got out too. He made a grumpy and angry face. I looked at his front wing where I had hit him and saw nothing. The wife got out too.

There was a tiny little scratch you almost needed a magnifier to see it. The wife and I agreed, that a  repair was not worthwhile but the old guy insisted to make an official statement for the insurance because he wanted the whole wing replaced ! No wonder that the insurance companies increase their prices this was really an abuse. But I filled in the papers, made pictures to be sure that he didn't get other "accidents" because he told me proudly that it was already the third time that it happened to him. I wonder why, he drove far too quick ! The wife whispered to me, "another day without car" poor thing. My car had nothing at all, so I said good bye and left.

2. The bushes along our entrance had a lot of twigs which grew over so I cut them off and now the entrance is clean again.

3. It rained the whole day and it was cold, not a time to go out at all. It was half of the temperatures we had just the week before.

4. Dominique came over with her papers to fill in the tax form via Internet with Mr. G's help. Unfortunately she had forgotten her pin code and had to go to the city hall to get it back !

I went to do some shopping for my birthday party.

5. I feared for my birthday party which I wanted to do on the terrace, but it was gray and cold in the morning. Fortunately around 2 pm the sun came out and I could dress the table outside. I also have a terrace heater which I switched on when they all arrived. So it was nice and warm. 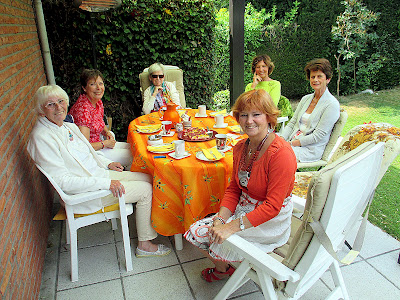 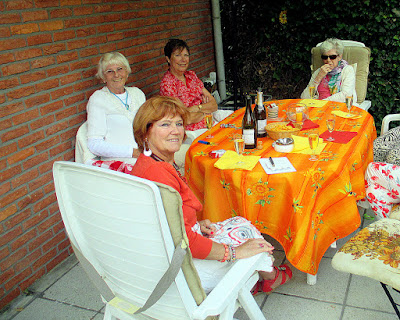 and here we are, my closest friends. First we had coffee with a Tiramisu and then switched over to Champagne, 3 bottles were emptied during the afternoon and we had a lot of fun. Mr. G. after the Tiramisu escaped and came only back for a glass and then escaped again. 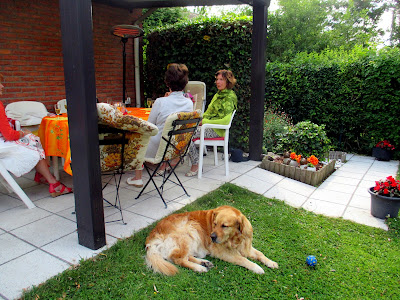 Of course the guest of honor was Charlie who as usual made us laugh. He is a very good dog and lay or under the table or in the grass and never asked for a treat !

We had a real nice afternoon and the last once left at nearly 7 pm. During the evening I felt strange as if I had caught a cold. I hope it will be better because we have to go to Amsterdam to celebrate my birthday with my son and family.

more participants at Susanne at Living to tell the Story.
Posted by Gattina at 07:57