1. I still couldn't go out because I felt quite weak after a week of being sick. So I spent my time with some computer work which I had neglected and watched TV ! 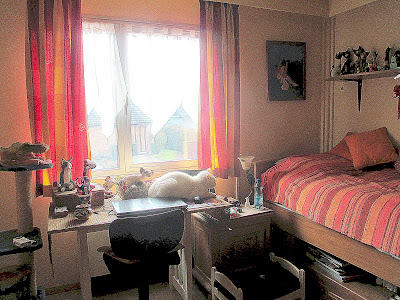 2. Mr. G. had very bad toe nails and I had to call a medical pedicure. 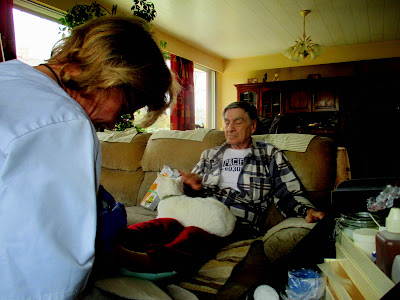 While she was busy with his feet, Arthur comforted Mr. G. I think the pedicure lady had never had a client with a cat on his lap !

3. We had a little wood just at the beginning of our street, it was the last reminder of the past when our houses were surrounded by fields with grazing cows. The whole day I heard the noise of chainsaws and when I went out to see what it was, I saw that they were cutting down trees ! 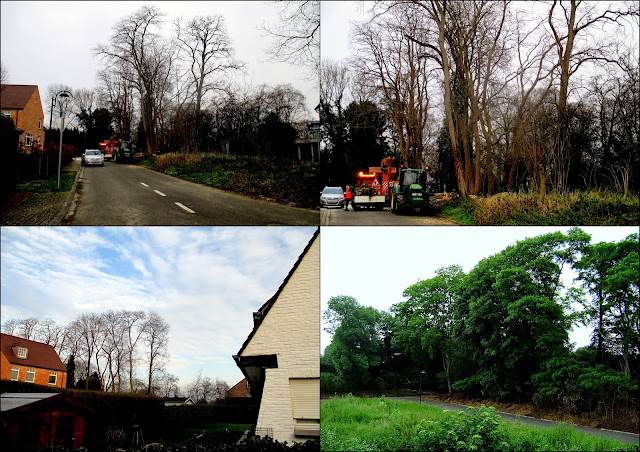 Now and before (already reduced for new houses)

Now there are only a few trees left, which will probably be cut down too, and the nice little wood we had and where the kids played and built little huts will disappear forever and make space for new houses to be built. It seems that everybody now wants to move to Waterloo ! More and more houses are built. 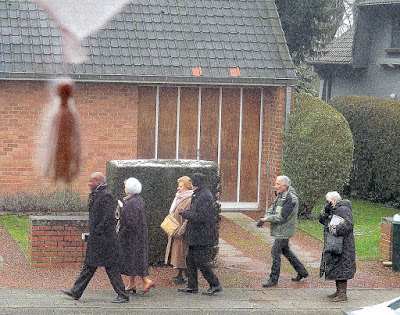 When your desk is just in front of your window you can see everything what happened in the street. Here I saw a group of Jehovah witnesses walking from house door to house door, which avoided me to open the door when they rang at our door.

5. Despite feeling so weak, I went to my painting class and it had been a good idea, being amongst people again and chatting and laughing is also good for a recovery. I didn't work very much, I had a lack of inspiration, but still it was a nice morning !

I am surprised people don't protest against the removal of the trees.

It's the same everywhere: if there is a bit of green left, they chop it down or bulldoze over it, just to build more houses! Such a shame. I dread the day it will happen to my view (although it is farmland, so I might be in luck).

Yep, so sad about the trees. You saved yourself some time not opening the door!

It's hard to live in the same place for a time and watch it change (for the worse). Sorry about the tree cutting. I hope you continue to get better; don't overdo. I agree with getting out and seeing people when you can feel up to it though.

Wishing you a speedy recovery Gattina. It's quite a torture for active ladies to not get up and go.

I find that so sad that they are cutting down trees. Pleased to see that you managed to get out for your art class.

I wish they would stop cutting down trees to build more houses :( I think that Arthur is your most curious cat. He always seems to be in the photos.