MY WEEKEND OF DECEMBER 27

We were happy to be home again, and when I opened the shutters I saw that it had snowed ! 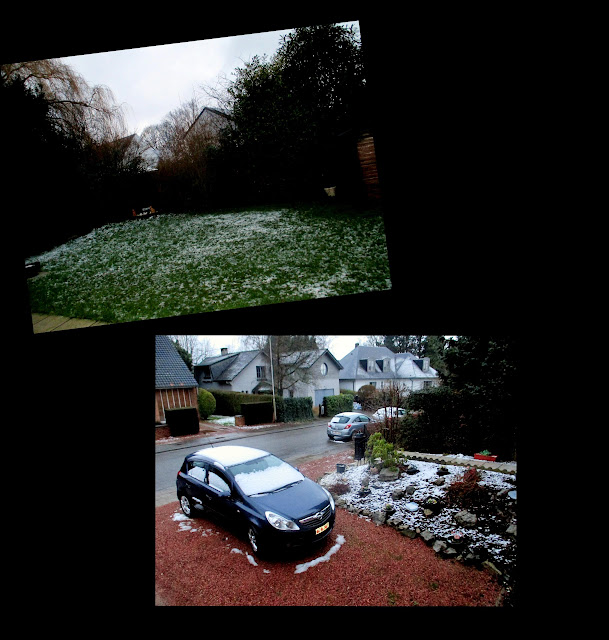 Not much yet, but it was a beginning ! How lucky we were that we didn't have any snow when we went to Amsterdam on Wednesday ! Later in the News we saw the mess on the highways to Amsterdam it had snowed more and there was a terrible traffic jam around Antwerp.

Our son had offered us a framed picture for Christmas, on which we are now fixed for the eternity. 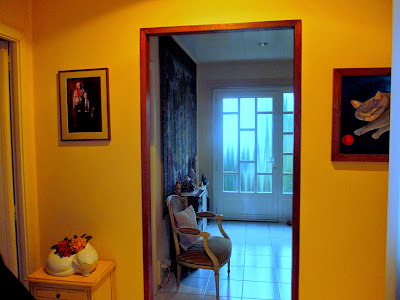 Mr. G hang it in the entrance. 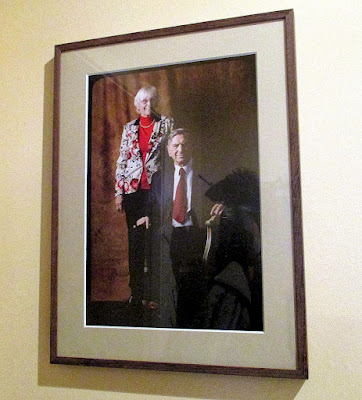 Here we are, the Godfather and his wife ! The picture was taken in April. After lunch it had snowed more and more and I had this nice view from my sofa into the neighborhood, and then into the garden, where my little cat statues had white hats !

In the afternoon I wanted to buy a tablet for Ilona, the same I had bought for Mr. G, but this tablet had had such a lot of success that there was none left ! I have to wait til January, so I continued my way to Nicole, where we exchanged our Christmas celebrations experiences and ate some cake which had been left by her daughter. She had a nice Christmas together with her son, wife, daughter and grandson with girlfriend. 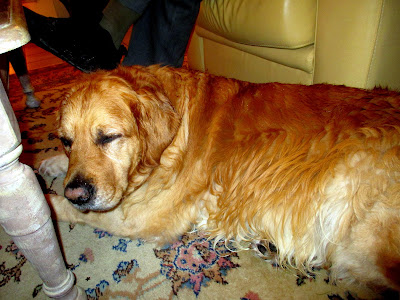 While we chatted Charlie lay happily between us and wasn't very interested in our conversation. On my way back, it had snowed even more and I was happy to return home without any problems, because as usual when 3 snowflakes fall, the traffic in the whole country breaks down !

My tigh, shows now a modern art tattoo, a big blue spot, it still hurts a bit when I move. I still think how lucky I was that I hadn't broken anything while I fell down 4 steps in my son's house. 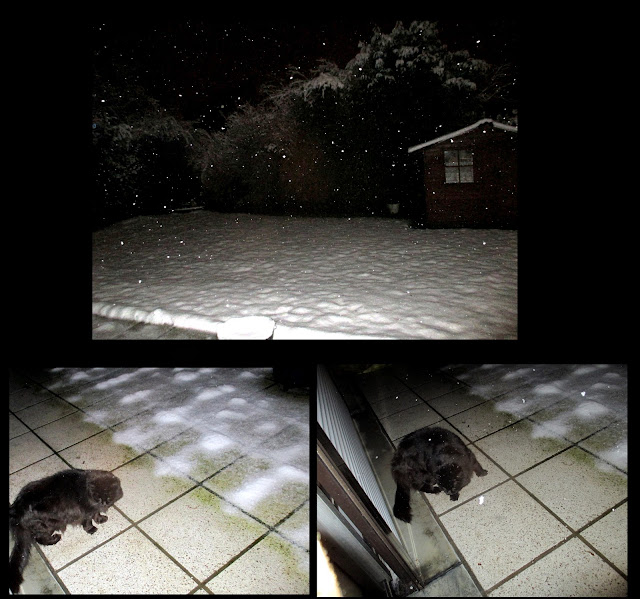 When I closed the shutters before we went to bed and had opened the window door to aerate, our cat Kim wanted to go out, saw that white stuff and ran back into the house again. She probably had forgotten what snow is, the last time it had snowed in Belgium was 2 years ago.

On Sunday it was freezing cold, - 5°C (41 F) but a wonderful sunny weather. I wrapped myself into several layers and took the bus to Brussels to the Midi market. The case for Mr. G's tablet which I had bought was far too big, so I brought it back and got a smaller one. I also bought some fruits and roasted chicken breast, unfortunately there was a very cold wind and lots of stands missing. They probably were unable to drive to Brussels with their trucks as the streets were slippery and full of snow. Nothing had been done as usual, and on top it was Sunday.

After an hour I thought I would freeze to a statue and took the bus back home. 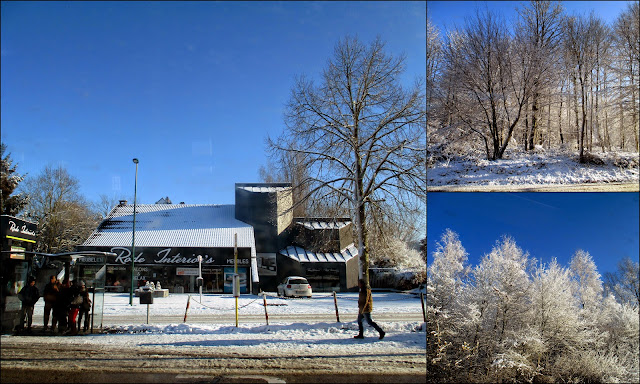 Part of the bus ride goes through the woods and it looked really very beautiful. Waiting for a bus to come was another story, it was so cold ! 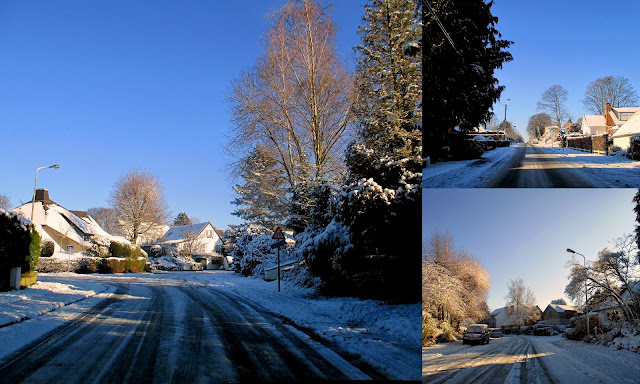 From the bus station I drove home with my car and took some pictures of our street through the windshield !

The rest of the day I spent watching TV and then at my computer, observing people with kids and dogs walking through our street, some Daddies pulling slides behind them.

Hi Gattina - glad you got home safely from Amsterdam. We haven't had snow here, but from the weather maps guessed you might have had over the Channel. Still busy I see! Happy New Year and here's to an easier life in 2015 ... cheers Hilary

A belated white Christmas. It is hard for us downunder to imagine, but I am pleased to recall the temperature outside Brussels Midi Station was not too hot last June. I focus on avoiding heat, not cold.

How nice to see snow!

My goodness ! I was out of breath just listening to you. lol
I am also glad you did not break anything falling on stairs.
I am petrified of stairs. And as for taking the bus I won't do it either.
Today even parking lots are not safe anymore.
People walk up to you and you get distracted and anything can happen so you have to be in couples and wear helmets so no one cracks your head.lol
Lots of things have changed and people can't be trusted anymore. This is why police shoot first and ask questions later and people are upset. No one asks why their kids are shop lifting and have guns on their bodies.
Apparently this doesn't matter anymore.