When I wanted to take the lift to go to our room, I thought I would step into a shaking boat ! But it wasn't the lift which was shaking but an Englishman with a glass in his hand who was so drunkent that he hardly could keep his balance. He told me that he would go downstairs when he saw that I pushed the button for the 4th floor. I told him that it wouldn't matter and that I would go with him downstairs and then up. He refused. It didn't matter anyway I was a head taller. I pushed him a little aside and went in. "Stupid woman" he said. I looked at him and answered "maybe, but I think you had a glass too much" and pointed on his empty glass. The lift went down. By the time he finally was able to move and go through the open door, the door closed again and we went up to the 4th floor. That made him very angry, I didn't bother and told him that he should enjoy the sightseeing I am offering him to the 4th floor. If looks could kill, I think I would be dead by now. On the 4th floor I went out not before wishing him a nice trip to the first floor and to bar, for a refill, as lots of nice drinks would wait for him. The door closed and I will never know if he managed to get out of the lift and find his destination..

Of course the hotel has quite a lot of places where you can have a drink ! 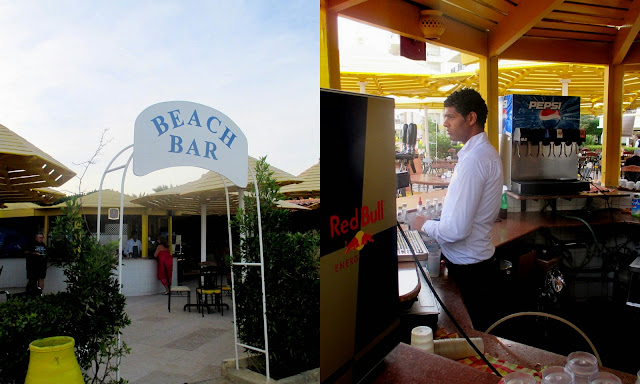 On the beach, at the swimming pool, in the lounge and of course in the restaurants. There are three of them. Quite a lot of men love the drinks, especially as they are included in the "All inclusive" price. And the drinks are strong ! They are not stingy with the alcohol, and put more in the cocktails as necessary, I think the personnel who are all muslims and never drink alcohol,  enjoy to see them drunk, they are so ridiculous then. Unless they become aggressive. It's a little revenge to all those who treat the personnel, as if they had a castle with servants at home ! 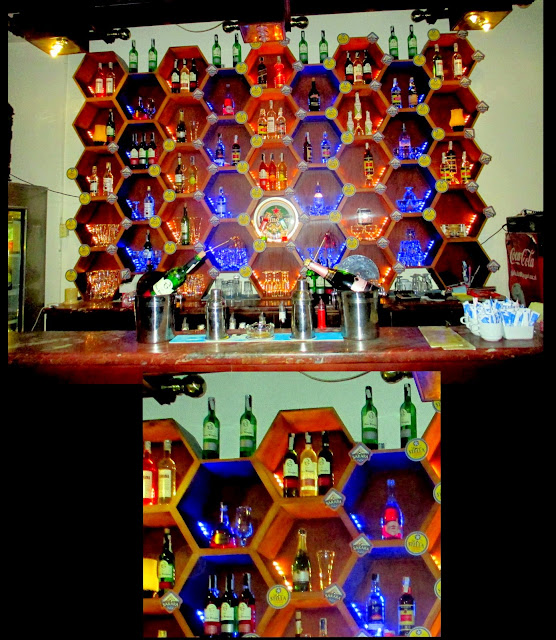 A lot of choice !

I don't drink alcohol at all and always ask for alcohol free beer. Beer floats in streams and on the beach usually men walk around with a beer glass in their hand. The bellies look accordingly. From 5 month pregnancy it goes up to at least 24 months, so big  are the bellies you can admire which the men carry over their bathing suit. Some of them could even serve as a built in table. 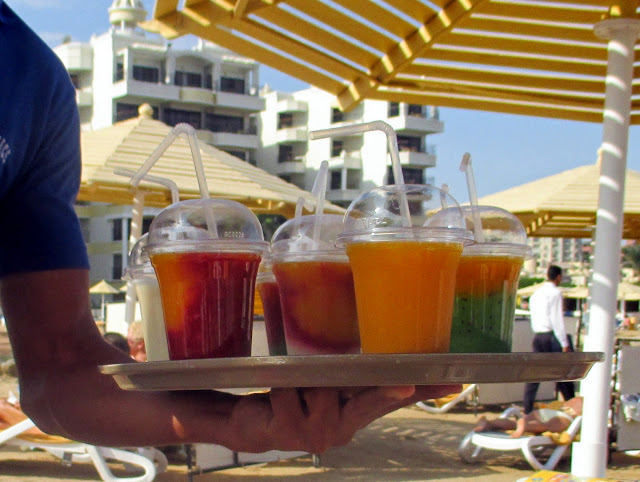 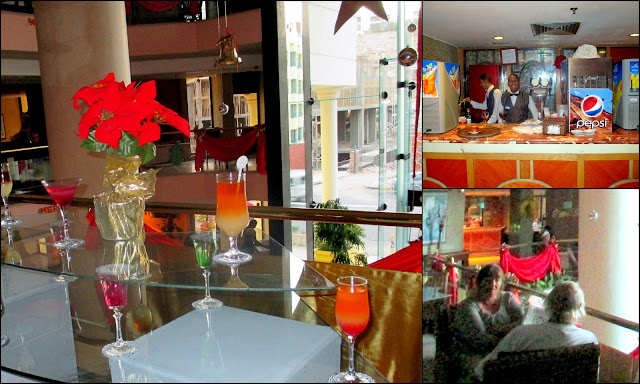 The drinks look very colorful and attract especially women, who are then surprised about the effect the drink has on them.

At breakfast you see guests with their hangover faces. Usually they  then wait until the bars open at 10.30 am and then it starts all over again. ! Cheers !

Such a pity that some people on holiday just want to drink, they could do that at home too. They should enjoy the sights and sounds of a new place like you do.

It amuses me that the Muslims serve alcohol. It doesn't gel with me.But I guess they can see the dollars. Drunk people spoil the fun.

Happy Weekend to you,
artmusedog and carol


I can just picture them all staggering around!

That's why I really love the marvelous cocktails without alcohol! But when I come by you in Belgium I really love tasting some beers with cherries or other red fruits!

The drink display case is nice. You made an interesting point yesterday, about it being cheaper to holiday in Egypt than pay the heating costs back in Germany.

LOL! I do like a glass of wine with my dinner, but how stupid these people are who live and breath only to drink. We stayed once at an all-inclusive resort in Puerto Vallerta and there was one guy who never left the outdoor bar area -- I swear he was there when I'd go down at 7 to swim before breakfast and we never passed the area but what he was there. Guess he wanted to get his money's worth by drinking everything in the place! Crazy to think he had to pay airfare and lodging to do something he could have done at home. I doubt he even ever saw anything besides the bar. Stupid stupid stupid!!!

It's very interesting that the bartenders in Egypt are Muslim.

I'm not a drinker either. Had to chuckle at your description of the bellies…

even though mine is pretty large WITHOUT the aid of alcohol.

I think they're making lots of money off of you because you don't drink. It sounds like some are drinking more than their fair share.

Did you know you have word verification? It's mysteriously appearing on blogs. I've had it too but they say it's a glitch.

Love your delightful description of the belly bloating!

Although it was probably more delightful to read than to actually look at!