1. During aqua gym we of course discussed the exceptional funeral with about 300 people of our friend Caroline who had died of cancer at age 55. The once who had been there were also so surprised that so many people had been in the church. We hadn't known her name until we saw it much later on the obituary in the most important newspaper in Belgium "Le Soir". And now we understood, she had been a baronesse, and belonged to one of the most important noble families in Belgium. The family is even described in Wikipedia. The fact that it is a big family, plus the friends explained now why there had been so many people.

2. I didn't feel well without knowing what I had. I took some antiinflamatory pills, and stayed home. I was feeling so tired that I fell asleep each time I watched TV ! At 8 pm I went to bed and slept for 10 h !

It lasted for two days, and I spent my time with filing my photos and taking pictures of my cats. I had run out for my cat blog. 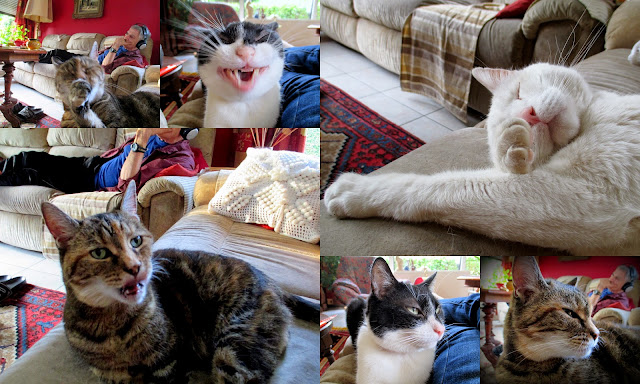 They were keeping me company, while I lay on the sofa and watched TV. Mr. G. although he wasn't feeling sick, did the same, asking me all 5 min if I was feeling better !

3. Our garden (or yard) started to look like a jungle, everything had grown so fast in the last days. 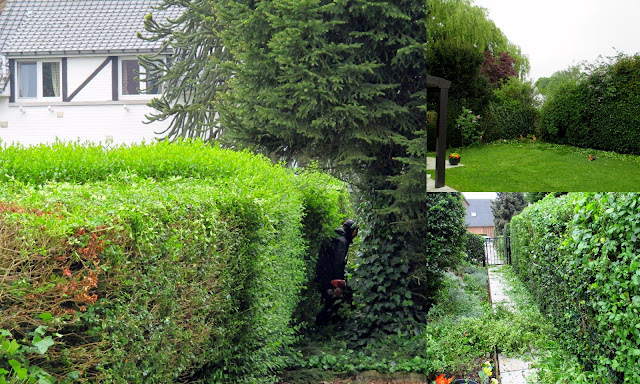 Our gardener came and trimmed all hedges and bushes and now it looks clean and nice again.

4. Labour day is on the first of May and to celebrate it is an official holiday where nobody works. That's why it is called labour day. All shops were closed and many people had taken one day off to make a long weekend. 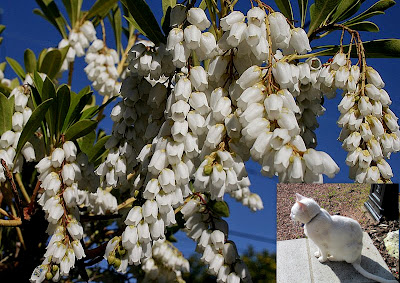 All I managed to do was this, with the help of Picasa.

Normally I have a lot of Lilly of the Valley which grow in our garden, but this year they had bloomed too early as the weather was so warm. So my Lily of the Valley had already faded and were not good anymore to offer to somebody. 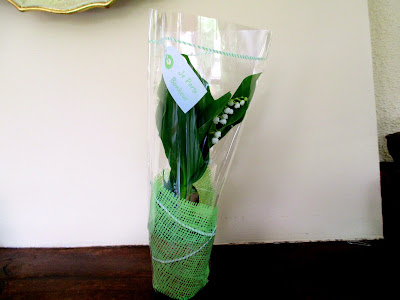 For the first time since I live in Waterloo I had to buy them, one for Ilona's mother, who is 90, still lives in her apartment alone and is fit like a fish in the water ! Ilona was there too and we had coffee together and chatted. On the label is written : "Je porte bonheur " "I bring luck". I think it's a very nice tradition. At the end of the day we had a rather impressive thunderstorm, it made a lot of noise !

Hope you are feeling better now, sometimes all that is needed is a quiet day home with cats, Your cats are very photogenic.
I don't think Lilly of the Valley grows well here. If it did it wouldn't flower in May.

Hope you are feeling better. It is a nice tradition with the lily of the valley flowers. I guess photo shop would do what you want but you have to buy it. Pic Monkey might do it and it is free.

I love Lily of the Valley and you've reminded me I want to get some to plant. Our labor day is the first weekend of September and is supposed to be a holiday but now that stores are open every single day people in retail or restaurants don't get that day off anymore. It's a shame.

I think maybe iPiccy might have a cut out tool and it is also a free program.

I saw lots of lilies of the valley this morning! Beautiful. And I could really enjoy it, since most schools were closed and hadn't bothered telling us about it, making most drivers drive empty buses!!

Happy Friday to you. I hope you are feeling better now. I'm sure the cats helped with your convalescence on the couch.
The lily of the valley plants are beautiful! Happy Labour Day to you!

That does sound like a nice tradition with the lilies of the valley.

So you was at the painting class with a baronesse and you didn't know it! She wass certainly very discret and nice. It's very sad. I HOPE YOU GET BETTER NOW! I was a sleep for two days and Pierre too and we don't know why cause we didn't anything particulary during this time!
We worked a lot today with Pierre and Anaïs! Pierre put the (canisses)
on the treille and Anaïs and me we painted the doors in the living room!!! I put some pics of Pierre on facebook!

Sometimes all a person needs to get well is to sleep for 10 hours and rest all day. As long as it doesn't go on for more than a couple of days like that. The only time I love to sleep is when I'm sick, otherwise I think it's a waste of time (but I do it anyway, (kind of like eating broccoli) because I know it's good for me.

Amazing that the Baronesse took water aerobics and never mentioned to the class about her title. She must have been a lovely modest person, making it even more sad than it was anyway.

How amazing to find out your friend was a baronesse! People are full of surprises, aren't they.

How many cats do you have now? Rosie has certainly grown into a beautiful cat.

I love lily of the valley and had it in the garden on the farm we lived at. Such a beautiful perfume.