MY WEEKEND OF NOVEMBER 16

It was foreseen to go to Amsterdam on Saturday to celebrate Toby's 3rd birthday, but for some reason it didn't work, so instead of playing with Toby, I did some shopping went to the petrol station and was very pleased because my car needed just a little more over the half of petrol as a "normal" car, because it's a hybrid and in the city I mostly drive on electricity.

The rest of the day I spent with doing some collages and answer emails.

On Sunday morning we drove to Amsterdam. After half an hour driving I asked Mr. G if he had taken the birthday gifts along which were in our guest room. Of course he hadn't ! We had to return home to pick them up and arrived therefore nearly 1 hour later. It was good that nobody could hear us when we were reproaching to each other whose fault it was.

The living room was decorated very nicely for this big event. 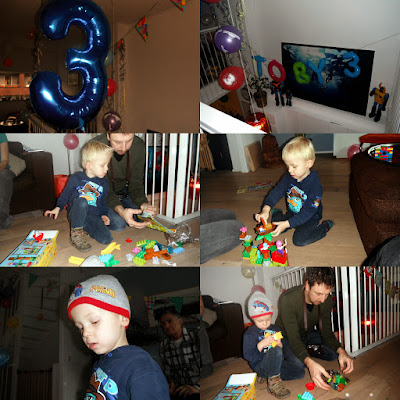 Toby got a lot of gifts and was excited to unpack them and then started to play. 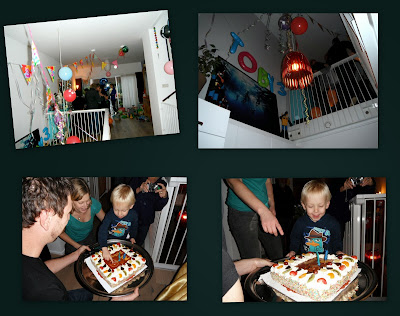 Later the guests arrived, the other grandparents and some friends with their children. 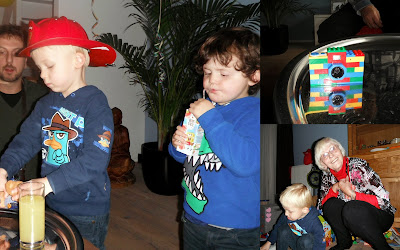 We didn't have a lot of opportunities to play with Toby, he was too busy.

He was very tired in the evening and fell asleep rather quickly. I will sleep tonight in his room, and we will snore together. When you read this, we are on our way home.
Posted by Gattina at 06:30

he has grown so!
we've done that same thing. Forgotten the very thing or things that prompted the trip.

I can hardly believe he is three already, Gattina. He really is growing up quickly!
How wonderful for you to spend the night in his room. I remember my grandmothers always made me feel so safe and happy.
Luv, K

Will Toby come and get into bed for for a cuddle with his grandma.

So much excitement for a little boy. It sounds as though he had a really happy day.

What a lucky boy Toby is to have such a nice birthday.
I can imagine the shouting and fuss in the car when you had to turn back for the birthday gifts.

I am glad that you were able to be there for Toby's birthday party! Love the picture of the two of you!

Oh I'm glad you got there for the party!

I wonder who was most tired - Toby or the grandparents?

An outing for us is not complete without returning to the house for a forgotten item... what a fun 3rd bday, enjoyed the pictures.