A DAY IN ARLES - France

The day arrived I fulfilled a dream, we went to Arles where my favorite painter van Gogh had lived, painted, became crazy and cut his ear off. 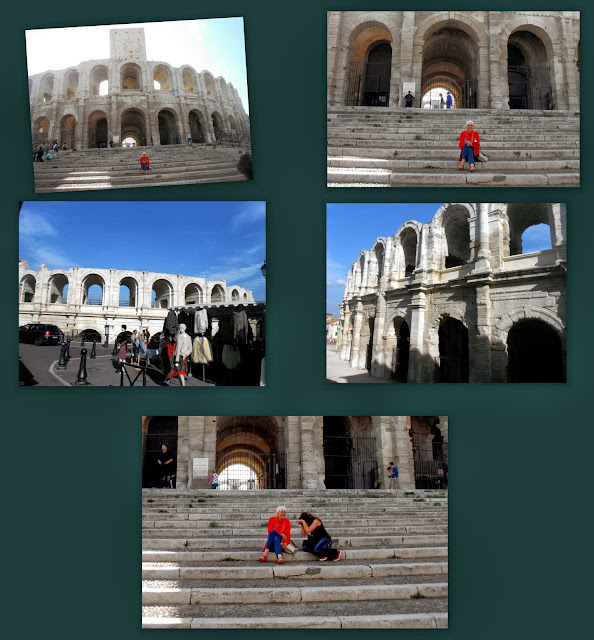 The first thing I saw was the amphitheater which dominated the whole town. I didn't go inside because I hadn't enough time, all I wanted was to see the things concerning van Gogh. On the steps I played corrida with Claudie's daugher, she was the bull ! 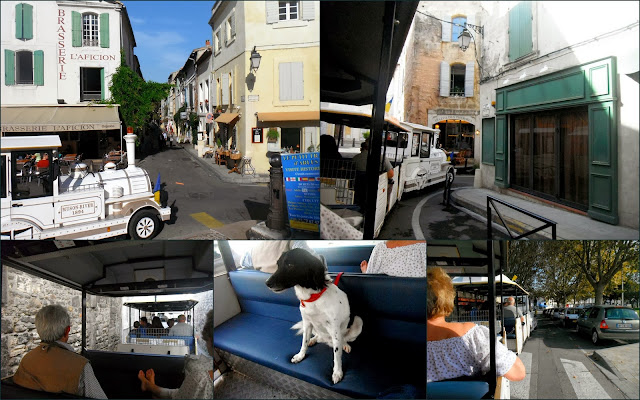 Just opposit the arena was a little train stop, which took tourists through the city and explained all important places. When I had chosen my seat (Claudie and the others went into the arena) this cute dog climbed in and stayed with me although the owners had told me he wouldn't stay long. But he stayed. The train went through such narrow streets that I could touch the walls on each side ! 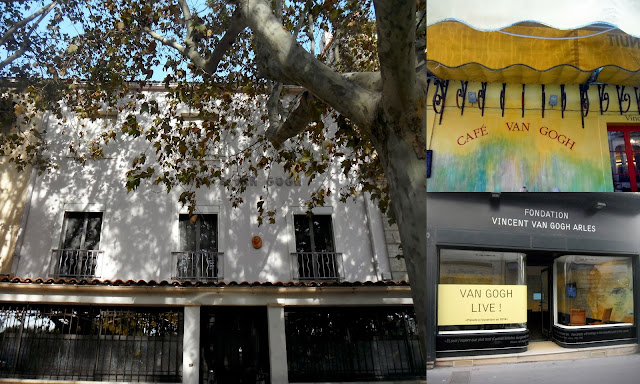 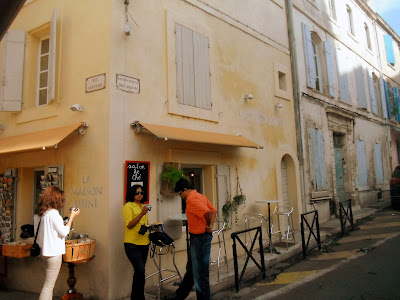 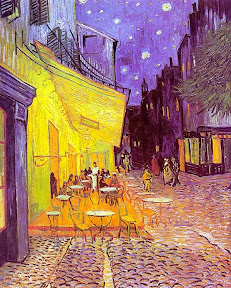 And then I saw the yellow house which van Gogh had painted, the house in which he had lived together with Gaughin, the parks etc. Unfortunately the house was a rebuilt because the original had been destroyed during WWII ! Which made me very angry. Today it is a hotel and of course attracts tourists interested in art, to sleep there where once van Gogh had lived. The tour was very interesting and I will write about it later. 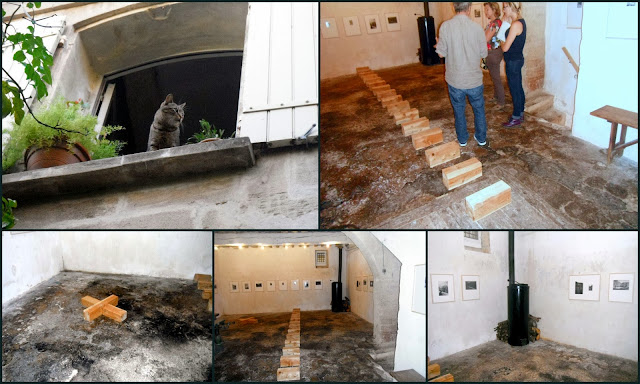 Then we had to go to an Exhibition, Melissa the youngest daughter had to write about for her art studies at the University in Aix en Provence. We were five to look at the map and the little GPS on a smartphone and all five apparently had no sense of direction. So we walked stood, discussed, juggled with the map, turning it in all senses and finally I asked two ladies for the way. It took some time but we arrived to see the masterpieces of a certain Richard Nonas who had lived and worked in New York. Originally he had been ethnologist for 10 years. The exhibition was in such a small street that 3 people couldn't walk side by side. The entrance was closed and we had to ring an old bell. A cat looked out of the window, which was the best of the whole exhibition ! All you could see were square wooden blocks lined up and a cross. I more liked the iron oven in the corner with real logs behind. I didn't want to pretend that I am an intellectual art specialist, I thought the guy was making fun of people. Of course Claudie stayed with her daughter inside and listened to all the explanations explaining the sense of square wooden blocks lined up in a row. The only thing making sense to me was burning them in the stove.

We three, Anaïs, boyfriend and I sat outside on a stone bank and laughed our heads off. Then we went further and sat on the terrace of a café in the sunshine, along the river Rhône and waited for the student and her mother. It had been a wonderful warm day with 24°C ! It seemed like summer.
Posted by Gattina at 10:08

I would have laughed about that row of blocks too. I also LOVED the cat peeking from the top window. Great post!

Nice fotos and collage Gattina, , best regard from Belgium.
Have a nice sunday, here the ours clock changed in Belgium.
Thanks for hosting.
http://blog.seniorennet.be/louisette/

Lol, burning the art work in the stove.

Reading your recent posts it sounds like you are thoroughly enjoying your trip and warm weather. Thanks for sharing your escapades. :)

I think I prefer Van Gogh to wooden blocks. Glad you didn't feel moved to cut off your ear either!

Oh what a wonderful day. Even the silly (to me) row of blocks was worth it for the laughs!

I didn't know Van Gogh lived in a yellow house with Gaughin. I am green with envy at all the wonderful sights you are seeing.

Arles is beautiful. I definitely have to visit one day.

weird about the blocks . I would find them annoying. lol

Some modern art just passes me by. Did you read the story a couple of years ago about the cleaner at the Tate Britain gallery who cleared up a mess on the floor. The mess happened to be a valuable art work!Art is in the eye of the beholder. I am very envious about your trip to Arles. A place I would love to visit.

I was there twice, the last time back in 2006 and I fell in love with the place!