INTRODUCING THE NEW KING OF BELGIUM

When I "was" moved to Belgium with my parents, I was 14. To move to a Kingdom was the only thing which was of interest to my romantic soul. I read everything available about the King of Belgium at that time King Baudouin, very shy, very catholic and not at all a King as I had imagined. Of course I didn't think anymore that the King and the Queen are running around in their palace with the crown on their heads, as I had believed as a child, but I was a little disappointed because he looked too normal !

When he died in 1993 his brother Albert became King. The enthrownment was without glamour, he just wore a uniform, no royal guests were there, but I thought that it was due to the death of Baudouin.

On July 10 King Albert announced that he will abdicate in favour of Crown Prince Philippe on July 21, the country’s independence day holiday.

At 79 and having health problems he probably had enough of being a King and he will be handing over the throne to his son Philippe, who is 53. Albert said his age and health no longer allow him to carry out his functions as he would want to and I think he earns a nice retirement.

“After a reign of 20 years I believe the moment is here to hand over the torch to the next generation,” Albert said in an address carried by all of Belgium’s major broadcasters. “Prince Philippe is well prepared to succeed me.”

Therefore I will live another enthrownment, not a coronation ! And it will probably be as "romantic" as for Albert. No crown, no king's clothes, no nothing. I haven't heard or read that any of the other royal families will be present. As soon as his father has abdicated, he will be enthrowned and the whole thing is celebrated on the National holiday. That I call saving money !

Philippe was groomed from childhood to succeed his childless uncle King Baudouin.

He was born in Brussels on April 15, 1960. His place in the line of succession meant he received an appropriately rigorous and diverse education, first the school, and for the first time a public one.

This was followed by a four-year stint, from 1978 to 1981, at the Royal Military Academy, and training in the Belgian Armed Forces as both a pilot and paratrooper.

He later studied constitutional history at Trinity College, Oxford, and went on to receive a graduate degree in political science from California's Stanford University.

When Philippe entered his late 30s, we all thought that he will never find a queen, because he was so shy and unremarkable. He also had difficulties to read his speaches, which you could use instead of a sleeping pill, so monotonous it was. This all changed when he met  23-year-old aristocrat Mathilde d'Udekem d'Acoz while playing tennis in 1996. And finally he married !

It was not long before she had won the hearts of the Belgian people. Beautiful and glamorous, she also bridged the country's difficult divisions having been raised in the French part of the country, but coming from a noble Flemish family.

With Mathilde at his side who was a speech therapist (which came on purpose), Philippe  enjoyed a boost in popularity following the couple's wedding, and enthusiasm for the pair further increased with the arrival of their first child, a daughter, in 2001. His speeches were no longer sleeping pills.

When she eventually ascends to the throne, Princess Elisabeth will become the only female Belgian monarch in 171 years, thanks to a law in 1991 ending exclusively male succession.

So on July 21 we will have a new King and Queen. I wished there would be a little more glamour when he "climbs" on the thrown (yes at least that we have, and it's cleaned just now for the event)  maybe not so much "show" like in the UK but a little bit like it happened in the Netherlands. 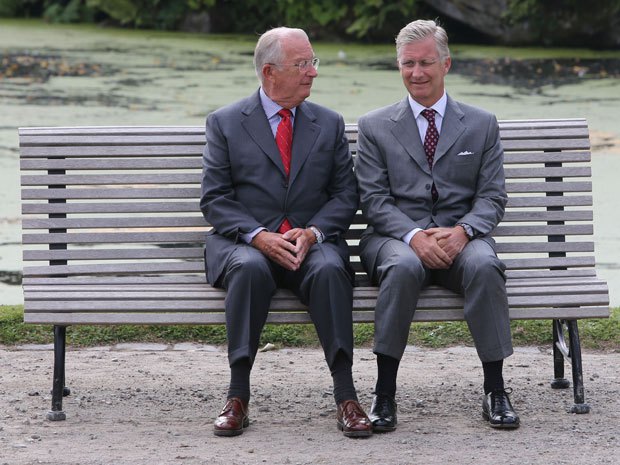 The old and the new King 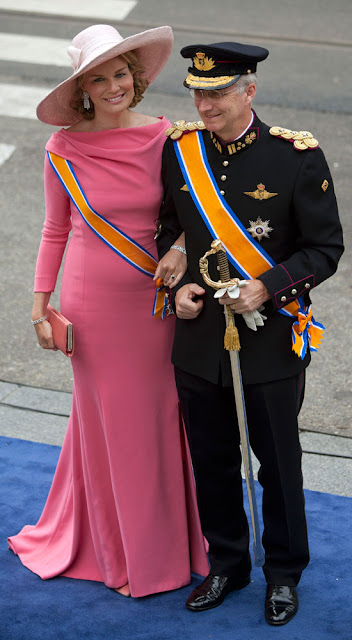 The future King and Queen, Mathilde and Philippe 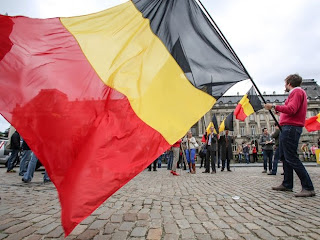 Belgians in front of the castle when the news were announced
Posted by Gattina at 06:00

They look like a lovely family and a bit of pomp would have been nice Its does bring in funds as they promote themselves but sometimes being quiet is better. You don't have the paparrazi after you all the time.
We are still waiting for Kate to have her baby. I now say the 20th of July but who knows this couple is tricky. Might not be till next month.lol

the new king sounds (and looks) glamorous to me, along with his beautiful wife. That's great that the princess will be queen one day. Funny thing that Mathilde was a speech therapist! {:-Deb

Hi Gattina .. hope Belgium is happy celebrating today .. it sounds like a very good move for the country ..

I saw this news on our TV News today. Your new King looks a nice, gentle man and has a lovely family. I wish him and your country well. Maybe they will be a unifying influence.

very interesting and fun to see photos, too!