1. After having gathered everything to take along to Ollioules at the French Riviera,  and packed my suitcase, Mr. G drove me to the airport to be there at 7 am. With pleasure I said good bye to the cold weather, took the plane and 2 h later had arrived in Marseille, where Claudie picked me up. 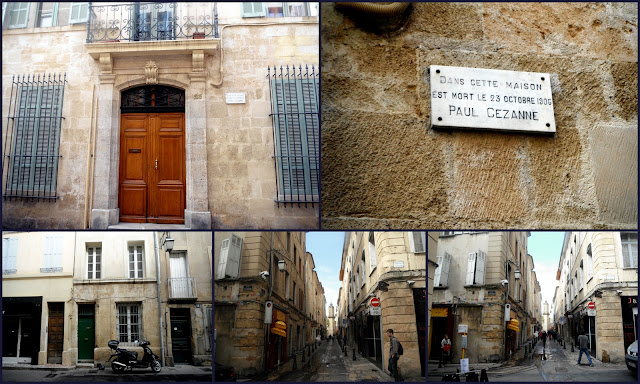 Before driving home, we stopped in Aix en Provence a beautiful old town where her daughter studies History of Art at the  University. We strolled through the old city and went to her flat where we had a picnic. It's located in center of Aix in a very old house (picture on bottom left)  with thick walls and a view on the charming little street.where the painter Cézanne had lived and died. 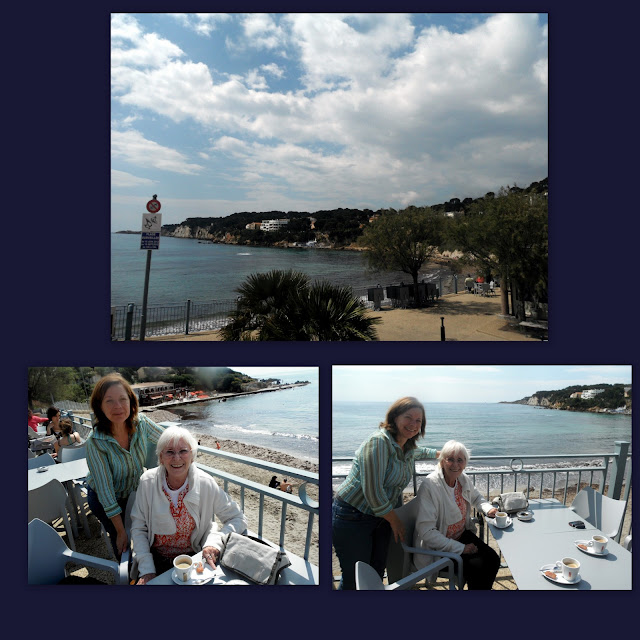 On the way home we stopped in Sanary at the beach where we had a coffee and enjoyed the beautiful view on the sea.

2.  Claudie's daughter had her first painting exhibition  and we spent the morning by preparing the paintings to be  hanged up. Dad armed with a hammer put the nails in the frames and I helped to choose which painting should be exposed. 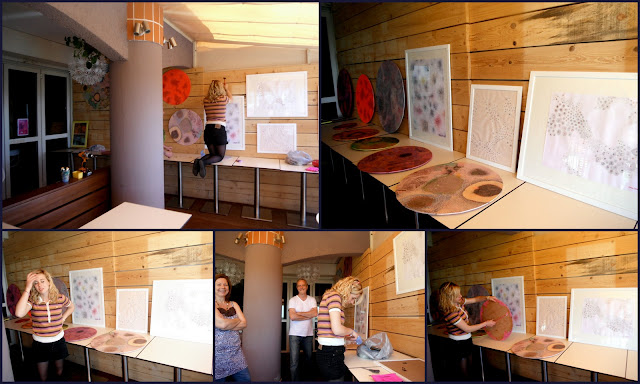 Here I was in my element ! I love to prepare exhibitions and have done quite a lot in Art school, for myself and for my painting class. It took us 2 h before we were satisfied with the result. Then we drove home to dress up for the event which started at 6 pm. 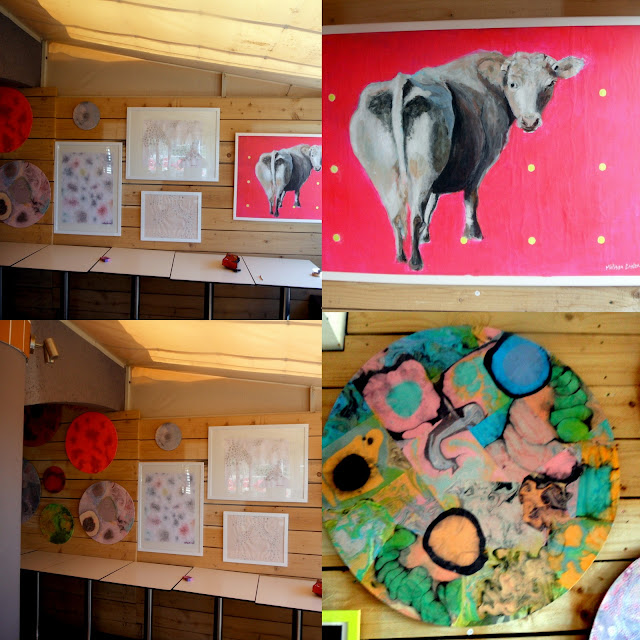 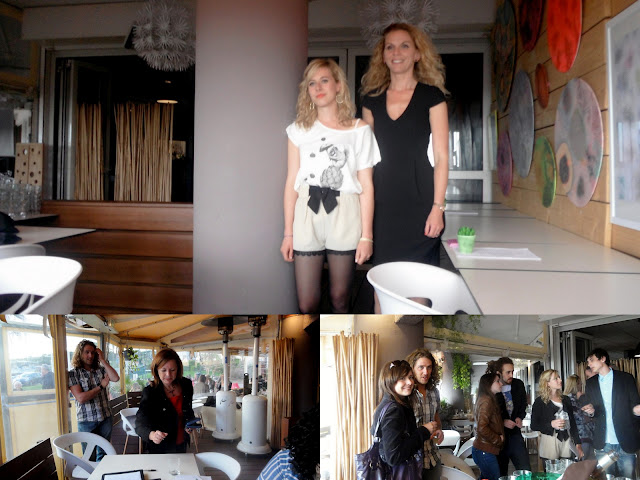 The owner of the restaurant with Mélissa the artist and lots and lots of people arrived. The Restaurant was located just opposite the beach. 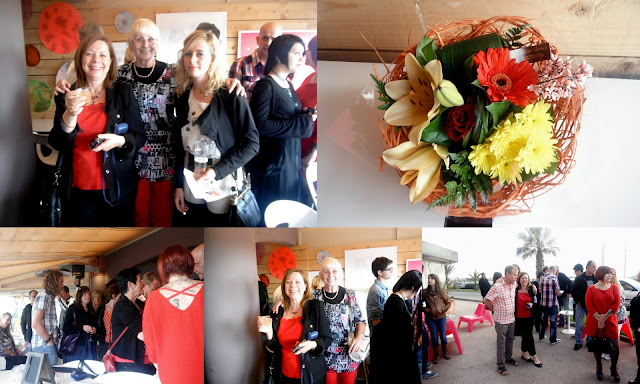 She got flowers, and drinks and sandwiches were served. A local Newspaper journalist came and interviewed her. It was just great and the poor girl was overwhelmed by the success and so many people !
We were all exhausted when we came back late, just had supper and went to bed !

4.  We had to drive to Aix en Provence again to empty Melissa's flat as her university year finished. 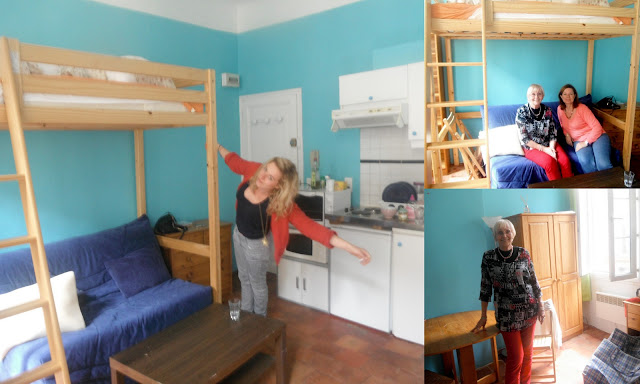 We gathered the last things made some pictures as souvenir and she said good bye to the place where she had lived for a school year. 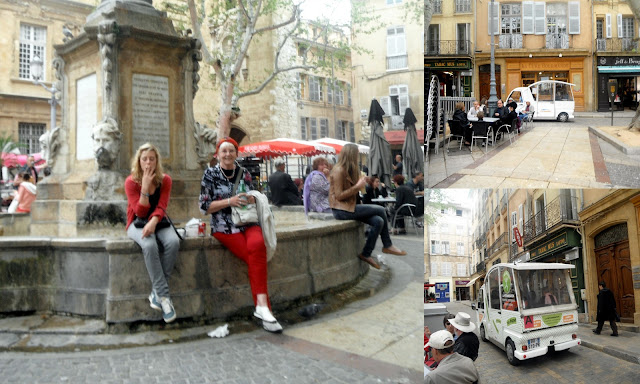 Then we bought a well earned sandwich and sat on the fountain in the middle of the townhall place. I was so amused by the little city buses, and first thought it was a private mini bus, but not at all the streets in Aix are so narrow that they have to use such little buses ! It was the same with the garbage truck unfortunately I didn't have my camera on hand, it just looked like a normal one only in "toy" size !

5. I had always wanted to visit one of my favorite painters Cézanne and was so happy to finally see his paining atelier which was on the hills surrounding Aix. 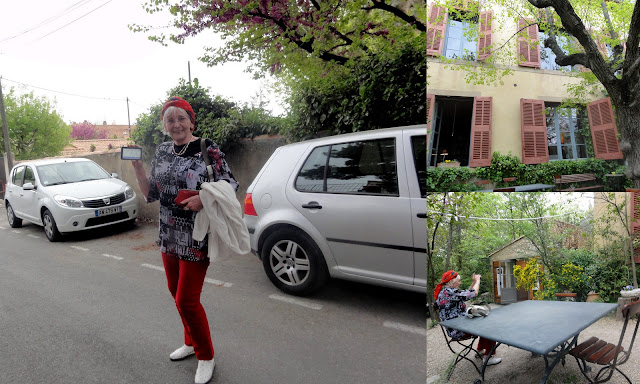 The way from the center to his atelier was very badly indicated but fortunately I had taken my beloved Madame GPS along so we found it rather quickly but the house number of the street was wrong ! Shame on Madame GPS !

Finally we found it and entered through a little door into a wonderful garden with the Atelier. 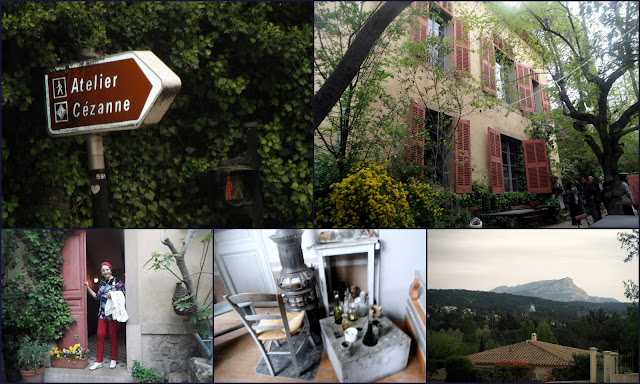 His painting equipment was on display in the room he finished his paintings and also had this beautiful view unfortunately now interrupted by the roofs of the houses.

We had been told to go a little further to see the place where he used to paint, which was extremely difficult to find, which I found a shame, we were not the only once who walked and walked asked twice for the way and finally arrived. 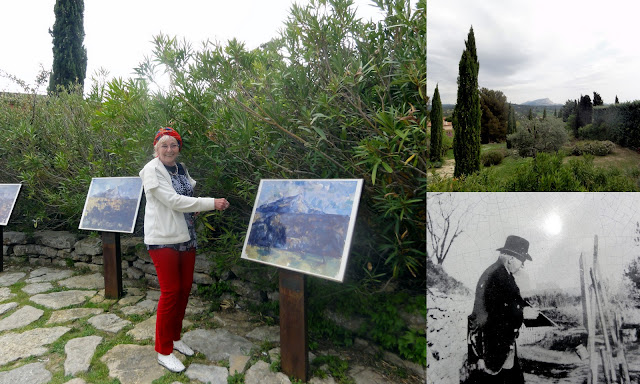 No wonder that he had chosen this place ! The view was just stunning ! Paintings of young artists were exposed there now always changing and lots of artists go there to paint. It is an extremely peaceful place and you can listen to the silence ! The blooming bushes, flowers and trees made an extraordinary parfum  floating in the air.

We stayed there for a while and then drove back to the center of Aix had a nice cool drink before we went home. 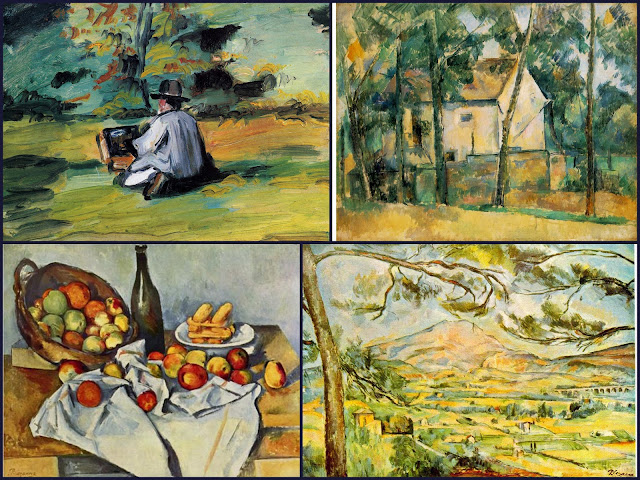 Cézanne' paintings
Posted by Gattina at 09:05

aww How lucky you are!Wonderful week, busy indeed but plenty of beauty and good energy!Love those paintings!
Lovely pictures!
Léia

oh my goodness. I need to direct my oldest daughter to your blog here. she LOVES the french painters (as do I) and she is a Fine Arts/Graphic Arts major taking Art History now. What a wonderful week you had....this young girl had a beautiful exhibition!! Is she your granddaughter?

This is wonderful! Oh I love to visit places where artists have created such beautiful works.

What a lovely time you had:-)

The visit to Cezanne's place sounds just wonderful! So glad you got to go! Looks like you had a busy, fun week. Those little buses are cute!

What a wonderful time you're having. And how nice to see Cezanne's Atelier. It was quite an exciting week for you.

Busy busy busy. But it all looks very pretty. I like those paintings by Cézanne. Especially the second one. I wouldn't mind having that on my wall!

How neat! This looks and sounds like a wonderful trip!

I would have loved to have been on that trip with you. To have walked in Cezanne's footsteps. Wow!

Oh lucky you! It looks like you are having a wonderful time. The beach, art, friends. Sounds like your perfect holiday.

Doesn't better weather make a difference to how you feel. I like the buses made to fit the narrow streets.

I'd love to ride in one of those cute little buses and visit Cezanne's house and sit on the side of a fountain in France and meet Claudie's daughter and learn to speak French and and and and......now I'm exhausted.
I think your holiday is so interesting.

Lucky lady to get in so many trips and outings. You must be having a very exciting time.

This week was a fave indeed! All about painting and friends--a perfect week.

You are having a wonderful time! I'm so glad. Your friend's daughter is very talented. How great that you got to see the Cezanne exhibit. Wonderful.

And P.S. You look so cute! And like you're having the best time.