1. On Monday I was extremely busy ! Although it was Easter Monday I and should have rested ! 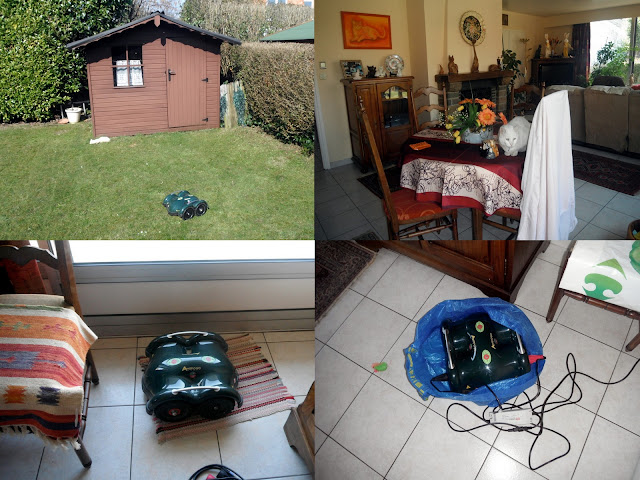 Instead I pushed the button of the washing machine and did the laundry, put Oscar the lawn mower Robot in the middle of the grass, pushed again on a button and then collapsed overworked on the sofa and assisted to a little murder in my crime story on TV ! Arthur did the supervisor on Oscar's work and when the lawn was mowed, I took it in and connected it to the charger. Working so hard would have been very much appreciated by my Grandma who loved all new inventions ! That must be in the genes.

2. Mr. G this time went with me to Ilona's to clean and update her computer. While he was busy 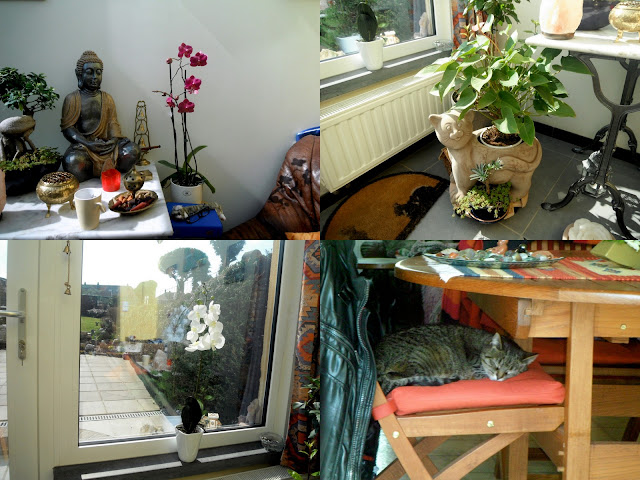 we were sitting in her gazebo and had a cup of tea. She has arranged it so well and cozy ! The sun was shining and it was quiet warm in there, and I had the impression to sit outside on the terrace. Mr. G joined in from time to time and admired all the little cat sculptures she has in her garden.

3. Now that I am feeling my old self again, I suddenly needed new feathers for spring ! It's still very cold only 4°C (39 F) but this didn't stop me ! 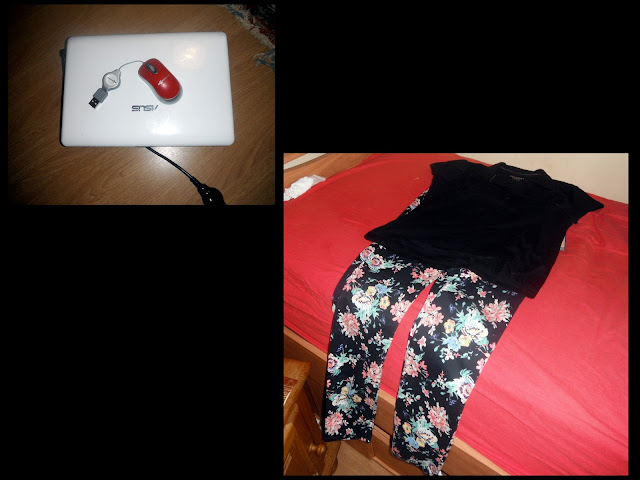 I bought a cute little mouse for my travel notebook and was so surprised that the mice became so cheap ! I only payed 4 € (5 $) ! And I found trousers just as they were in fashion when I was 30, (old  fashion comes back) and a black T-shirt. The good thing is I don't even look ridiculous ! Mr. G. loved the trousers !

4. Having informed Ilona about my shopping results, she called me and asked me to go back with her ! She bought red jeans and a red striped T-shirt, and we thought that now we are well equipped for our round trip through the UK. After that I took her to the whole sale store, she had never been there and she was so surprised about the prices there. As always the store was full !

5. Our fridge was empty and I had to go shopping for some food ! On the way back I stopped at Nicole's and met a friend there I hadn't seen for 18 years ! We had lost contact, she is the wife of one of  Mr. G.'s colleagues and also German. Of course we had a lot to chat and automatically spoke German together so several times Nicole had to interrupt us and ask to speak French ! We had some self baked chocolate cake together and coffee and of course the two dogs, Charlie and Daisy wanted some cake too ! 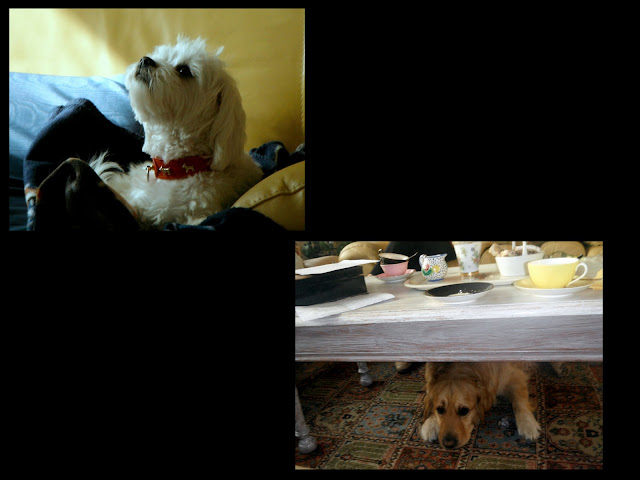 Daisy is only a little bigger than Charlie's head, but they are the best buddies !
We two women with some diplomatic talent also managed that our men called each other, and now they will meet again tomorrow after such a long time !
Posted by Gattina at 06:00

I did not even know you can get a lawn mowing robot. I have looked at robot vacuum cleaners. You have been busy.

A lawn mowing robot!! That is fantastic! I love running into old friends. Such fun to reminisce.

I need to talk my husband into buying one of those lawn mower robots. I don't think i've seen one here in the states. Hm.....gives me an idea for Father's Day! :)
Your pictures are always so cheerful and cozy. Enjoy your weekend!!

Today I think I will go out to the grocery. It will be the first time I go out in public with my deformed face! But we need food, and so I must go. It is time I get over being shy about how terrible I look!

I've got one of those little mice as well: mint green (they didn't have pink)!

I can see how hard life must be for you. I am quite breathless!

Roundtrip of the UK? When and where?

I just love your Oscar. I want one, I want one! Must be very exhausting turning it on and off.

Oh such a tiring day you had Monday ;>)I am surprised that you had the energy to do anything else the rest of the week. Sounds like your usual fun and busy one though!

Who rakes up the grass after Oscar has cut it? Do you have a robot for that too? Glad to see you enjoying yourself again and glad to hear that you are feeling better. Hope your temps improve soon.

That lawn robot sound so nice -- I will have to tell my husband and son about it!

Those pants are really cute!

Sounds like you had fun times with friends. How wonderful to renew acquaintance with an old friend.

Whew, I'm exhausted reading about all you had to do. ;v) It is nice to see big patches of green grass though, instead of all that snow you were showing us before.

That cat on the chair looks almost just like my Muffin. I had to look twice!

I so enjoyed reading all this- and love your photos, they are just so colourful.

They make floor-cleaning robots as well, I'd like one of those. Love your new outfit. This time of year makes me long for new feathers too.

What a delightful post! I enjoyed learning about your days and getting to know you a little beter too!