Nothing is more annoying for tourists crossing Belgium by car when the city they are looking for suddenly doesn't exist anymore on the highway signs. For example you want to go to Lille in France and you are sure you are on the right way but suddenly the signs indicate "Rijsel" which is the Flemish word for Lille. Nivelles becomes Nijvel and the little neighbor town Braine l'Alleud becomes "Nederbrakel". My poor friend Nicole wanted to take the train home to Braine l'Alleud but couldn't find it and had to ask. On the platform was written "Nederbrakel" ! She had never heard of it !

My town Waterloo is safe for translations into Flemish or other languages ! Water means water and loo comes from l'eau (pronounced loo) which is water in French. The word "loo" is commonly used in the UK for toilet. "I go to the loo" means that you go to the bathroom, restroom or whatever it's called always for the same purpose.

The history of the word "loo" is simple. Like many chiefly British words, 'loo' came from the French. Back in the days before modern plumbing, French commoners would empty their chamberpots directly onto the streets. A common courtesy was to yell, "Gardez l'eau!" (pronounced "Gar-day low", means "Watch out for the water!") to make sure no one was splashed if they were dumping it from a balcony, rooftop, etc. The English caught on to this term, and eventually corrupted l'eau to loo.

Conclusion logically I would live in Waterwater, but as water means l'eau or pronouced loo, it will always remain Waterloo ! 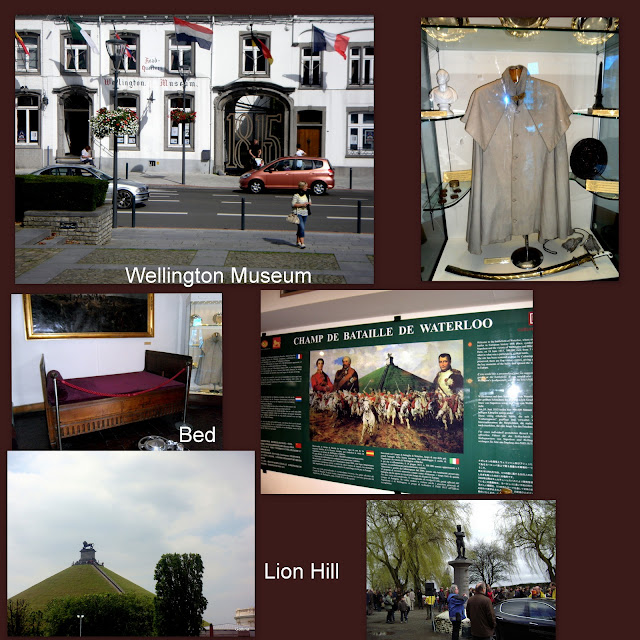 No confusion for those who want to visit Napoleon's battle field or  Wellington's bed and uniforms and climb on the lion. All highways (or motorways) are leading to WATERLOO !

For me it's rather strange that I only realized now that I am living in a town which would shortly be called WC !

I like to read the stories associated with the history of Europe. I am greeting

I always have to pay a little bit extra attention when I am driving from Lille to Gent (Gand in French). I nearly missed my exit once because I didn't cotton on quick enough. Mind you, the same thing happened to me in the Netherlands and there the signs were all in Dutch!!

When we were driving in Italy, many of the street signs were in two or three languages. That was nice. They are doing the same in the US now - having directional and street signs in two languages. Finally! {:-D

We have signs in only one language here. It would be fun to see them in others.

So in other words, you live in the toilet ? lol

Interesting etymology of the name Waterloo. I always enjoy knowing more about how names evolve.

You are so funny -- even when you are telling me such interesting history and meanings of words, you make me laugh.

You always make me laugh. Even while I'm learning so much history and word origins and geography and all that -- thanks for all of it.

What an interesting and informative post! It made me smile out loud!

We have that here a tiny bit.

We live in a major metropolitan area where four cities (collide). Sometimes when you turn left the road is named one thing...when you turn right it is another thing because you are in a different city!

I'm glad you have landmarks whose names remain constant.

This was an interesting link!

thank you for sharing it.