I had always wanted to see Stonehenge (my post here). Therefore I took the Eurostar to arrive very early in London. This time I wanted to make sure that I got the right way to the coach stop, as it was not the usual one due to the Olympic Games and closed streets. I was very well prepared. Thanks to Google map, I had a map and this description which I had printed out. I was sure that I would find it immediately.

Unfortunately I was sure, but my brain apparently not. As soon as I walked out of the station, and looked at my little map, I didn't know where I was ! Which exit had I taken ?? I asked one of the countless tourist guides hired for the Olympic games, and he looked at my map and said "I think you should take this way". That's what I did. But the name of the street wasn't the same as on my paper. I asked 3 soldiers armed with machine guns, I thought it would give a nice picture, unfortunately these once were not from London and apparently didn't know themselves where they were. I continued my way and asked a woman in uniform for tourist information. She told me that I am completely wrong should turn around and take this way, then turn left and then turn right and then I would arrive.

Of course I did what she said. Fortunately I had enough time left to find my bus. Still I couldn't find the stop. Finally I saw from far a sign "Evans" I went over there but it was a key and shoe repair shop. Nothing to do with excursions to Stonehenge.

My very doubtful orientation sense told me to go back from where I came. But this didn't work either, now I was completely lost. Suddenly I saw Victoria Station again ! Was I happy. There I had the good idea to ask a sightseeing bus driver. He looked at my map and said "Look behind you, see the street ? It's there at the end ! " With a sigh of relief I went down the street and .... there it was ! My bus stop to Stonehenge !

Indeed it was only 5 min walk but I had turned around for 45 minutes ! I realized again that in my brain there is no orientation sense ! I should have taken my GPS along which also has a pedestrian feature !

I entered the next available restaurant, ordered something to eat and a tea, sat outside and kept an eye on the bus which would take me to Stonehenge ... I didn't miss my bus and had a nice trip through the for the Olympic games decorated London before we got on the highway. 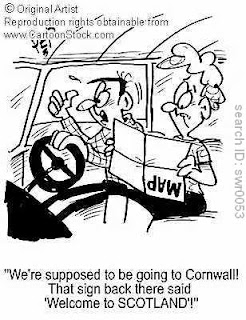 I am the same as you. I always allow plenty of 'getting lost' time and a bit extra time to recover fron being lost with a cup of tea.

Lucky you are catching the atmosphere at the Olympic place!!!