1. After having driven Claudie's daughter to Aix en Provence where she lives and goes to University, we quickly returned home because the Mistral wind was blowing so strongly and it was ice cold !
Fortunately it stopped in the afternoon as sudden as it had started.

2. Before going shopping in Ollioules we went down to the seafront and had our crèpes (pancakes) for lunch, salty of course. 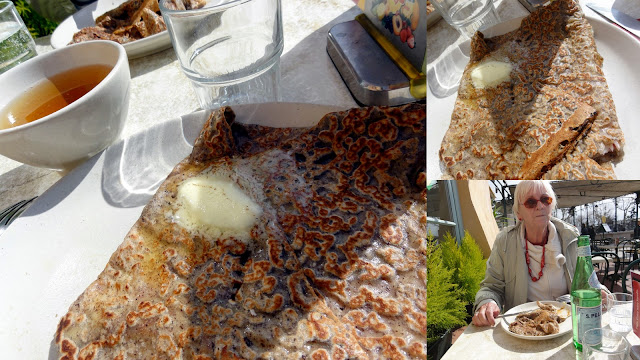 As you can see they were real huge and served with a bowl of cider. 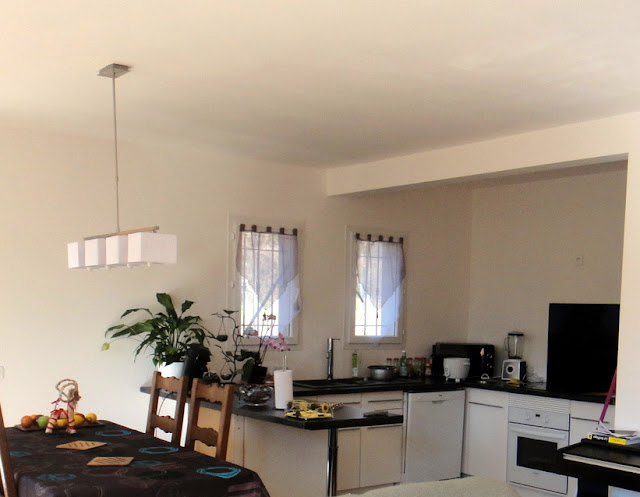 Claudie was looking for curtains for her kitchen and we found these nice once for a very good price we also bought some doormats and other little useful things for the new built house.

I like to go shopping in another country, now it's so easy to compare prices because we all pay in Euros except the English, Danish, Swedish and Norvegian "Europeans". They have to have their calculator and convert. 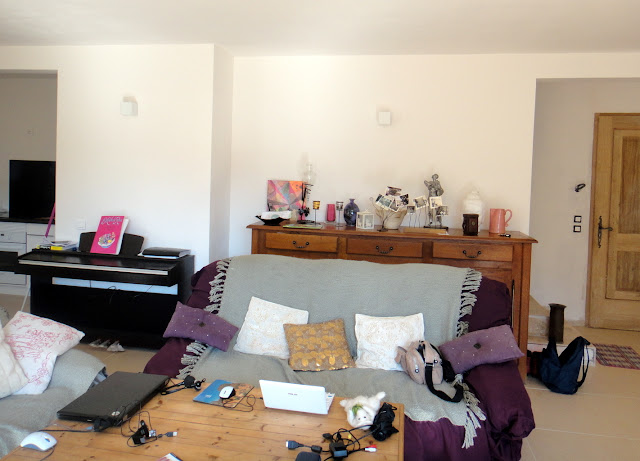 Here is our space for blogging, where we were busy to answer emails and I wrote my posts. 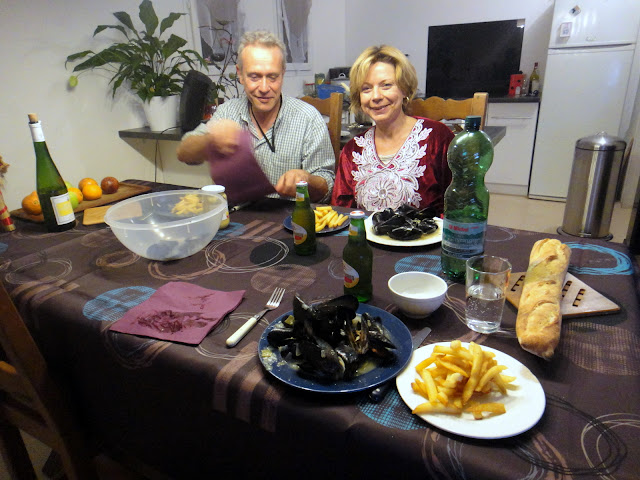 On my last evening we had local mussels with French fries, the mussels had another taste and were smaller as those I am used to in Belgium. 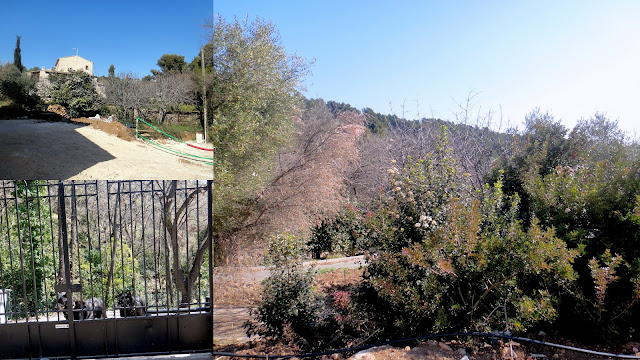 The last glance on the property and the two watchdogs from the neighbor who barked me good bye, one was so fat that I wonder if he would have been able to catch me ! Then Claudie drove me to the airport in Marseille, where I took my flight back home.

I arrived 45 min late and poor Mr. G. was waiting over an hour, he was there far too early. The plane had been delayed because of the strong wind in Brussels and when I arrived it was raining cats and dogs. The short way from the airport gate to the car and we were both completely wet.
Arrived at home I was greeted by an equally wet Arthur ! 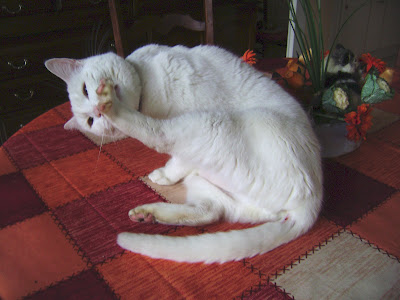 Who dried himself on the table.
Posted by Gattina at 06:00

Nice to remember our last day! You are a such good photographer and writer! Pierre is working for his gate now! And this afternoon I should go back to Aix and catch Mélissa and Marie as they have so much materials to bring for their artwork! Did you find the Senseo today?

That's the only way to dry off. On a table! I would do it too, but am afraid my table might collapse...

Glad to see you had a nice time. I just have one question though: I thought Mistral winds were supposed to be warm and here you are talking about a very cold Mistral wind. ???

Hello!
I have enjoyed reading of your vacation and seeing your photos.
The scenic photos and the food photos were especially interesting to me.
The crepes (not salty) that I enjoy here in the U.S. are served topped with fresh fruit, drizzled with strawberry yogurt, and sprinkled with granola. Yummy!
Have a great week-end!
Lea

Dear Gattina,
Glad that you enjoy this trip.Your friend is very kind!
Great pictures, I also like a lot the curtains!Hmmm mussels with French fries, perfect dinner with your friends! :)
Léia

I love hearing about all your travels and the food you eat. One of these days I'd love to travel to your part of the world!

Those fries made my mouth water. I once prepared mussels when I was in Provence, but I did not like them as much as ours. They were a lot more salty. Looks like a great space to blog, it looks so cozy! I hope you'll have a great weekend Gattina!

I've never heard the term “Mistral wind “ so are they out of the north.

I haven't had crepes for ages and always thought they where good. By the way where I'm from crepes and pancake is two different things. One has leaven in it and the other one doesn't.

By the look of Claudies kitchen it reminds me I should clean mine instead of playing on the computer.

Well I have my picture ready for the hunt.

I bet the cat was glad to have you home (oh and probably that guy who picked you up at the airport too ;>)..I bet they missed you!

Your blogging spot looks so cozy! The pictures were all great. Your cat is absolutely adorable! Great faves. Sounds like a fun week.

Great post and photos, Gattina! I saw some of your paintings on one of your other blogs and the colours are so vivid and lovely! You are very talented. Thank you for sharing.

Ahhh all good things must come to an end. She sure has turned out to be a super blog friend. The SAVOURY pancakes look delicious and the curtains are nice ONES.

I've enjoyed seeing places and lifestyle I'll probably never see through your stories and pictures. Looks like it was a nice last week to your holiday and I'll bet both Mr. G. and Arthur were glad to have you back.

Your crepe picture is tantalizing. A salty crepe? I've never had it that way. I like mine with berries and fresh whipped cream.

I read your post about the fish market. Intriguing photos. I never knew people ate sea urchins. I agree, I prefer to see veggies and flowers at the market.

Sounds like a good trip. Glad you made it home safely.

Lovely to see Claudie et Pierre so happily smiling- over having such a celebrity guest :-)

The mussels look big in our eyes, because in Sweden they're even smaller!!!

Give Arthur a kiss from me :-P