For our new front yard I needed some more plants for my exactly 11 pots. There is one nice garden center at the other end from Brussels, but with the highway it usually takes me not even 30 min to get there.

This time I had less luck. I didn't take my usual way but asked Madame GPS for a shorter one. She guided me on the same way but then suddenly told me to leave the highway. Which I did of course. Then suddenly I didn't hear her anymore and there was no km indicated when I had to turn left or right. I stopped to see what was the matter and why she was suddenly voiceless. I didn't see anything wrong and continued my way, at least I thought that I was in the right direction. Suddenly Madame GPS 's screen indicated that there was no battery anymore and she died !

Unladylike a pronounced a few words and plugged her in correctly, which apparently I hadn't done before. Suddenly she came back to life again, found her voice and then the nightmare started : "Recalculating" ... I changed direction and came back the same way. "Turn right" she said, there were works going on, I had to take another street "Recalculating" she repeated, I waited until she was finished with her calculations and went on. Works again. "Recalculating" ... and so joyfully I turned around and around until finally after 1 1/2 h (ONE AND A HALF) hour I finally stopped in front of the shop. In 10 min I had selected my plants and rushed back to the car. I wanted to call Mr. G. just to tell him that I would be later but of course I had left my mobile phone in the plug to be recharged ! Apparently I was in war with modern lifestyle this day !

Normally she also should know where works are going on but I hadn't read the instructions correctly, it is my new Madame GPS which I got for my birthday.

For the way back I thought I take my usual way, at least there would be no surprises. Wrong ! The road was closed ... works ! recalculating ... works, recalculating ... etc. until finally after again 1 1/2 h again she said : Arriving at home on right !

I was exhausted. Next time I buy my flowers in Paris or London that goes quicker ! 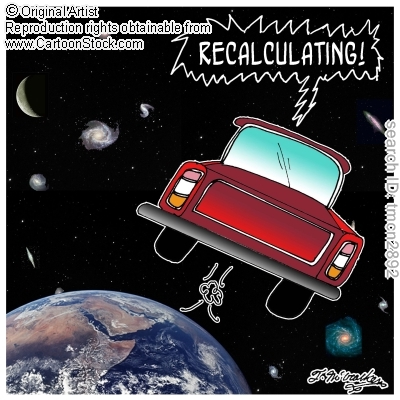