The only language where the letter P is pronounced pee and is therefore the favorite letter of the kids because it stands for what we all know : an urgent call from nature !

In French, German and Italian the languages I know P is not Pee but Peh and Peh doesn't mean anything but the letter P and there I am again at the beginning.

It is also amusing to listen to listen to a German with a strong accent who says Shakespeare's famous phrase :" to pee or not to pee, that is the question" ! 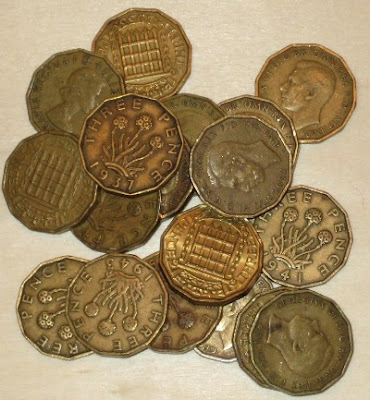 But p, pronounced in English is also money ! Since the decimalization of British currency and the introduction of the abbreviation p, as in 10p, 20p, etc., the abbreviation has tended to replace the pence in speech as in 1 p. During my researches for this "P" post, I also learned that a penny is a coin (pl. pennies) or a type of currency (pl. pence).

Today for one p you get nothing anymore. I had been told that to pee had once cost a p. That must have been a very long time ago, because now everywhere I stayed I had to pay 30 p which was a minimum. The "I have to go" fees in certain places could even raise up to 50 p's ! And for this price I didn't even meet a kind Madame Pipi (pronounced Peepee) who sits in a corner with a saucer on a little table, knits or reads and chats with the customers in need. Nowadays you have to go through impersonal barriers put your 30 or 50 p's in a slot and if you are lucky you go through without getting stuck.

This evening I leave the country with the p's, pence and pennies and return to my Euro cents, which means that I take the Eurostar from London to Brussels, where Mr. G. will pick me up !
Posted by Gattina at 06:00

Travel safely!! your post made me laugh and reminded me of an e-mail I got. New wine for those that wake frequently at night, forget Pinot Grigio, the new one is being marketed as: Pinot More !

I wonder why the Brits still have pees when they are not worth anything any more. A funny post. I was pleased to note that we never had to pay to pee in USA. You can pee free.

*chuckles* I enjoyed this! Thanks for the morning giggle!

Can't imagine paying to pee, though.

Long time no see sorry I've been a bit waylaid.

My Gran used to say "I'm off to spend a penny" meaning she was going to the toilet and it did indeed cost 1d (as it was) to use a loo in olden times.

I used to say "I'm off to spend a pound" meaning going for a dump but my gran thought that was too much info!

and Harrods' "luxury washrooms" cost £2 I do believe

I was wondering if I was the only one that didn't realize you had to pay to p. Pretty coins! {:-Deb

Have a wonderful trip. Hope you don't have to Pee after paying many P's for the trip. ~Ames

Have a great trip!

Loved your humorous link for the letter P.

It was just perfect.

PS. You have to pay to pee in Mexico, too!

Seriously? You have to pay to pee? I've never heard of such a thing.

So, what if you're broke?

Enjoy your trip and P safely:)

Oh this reminds me so much of the time I was a law student in Leicester. Such fun - I didn't even mind having to pay to pee!

Now, I hardly ever meet Madame Pipi. We sometimes have to pay to use toilets in Malaysia, but thankfully those places are few and far between!