IN CONCERT WITH ELTON JOHN

On Wedsnesday afternoon it started to snow, and I had booked a concert with Elton John already in August ! Even before we knew that it would snow, Dominique and I intended to leave home at 6 (the concert started at 8), picking up Ilona on the way and then arriving at the concert hall around 7 pm because it is very hard to find a parking space there. Of course the concert was also sold out !

Despite the meanwhile 3 or 4 cm high snow and snowy roads and very slow traffic we made it and arrived there just a quarter to 8, found a parking and were on time. Lots of seats were empty because outside there was a mess on highways and streets and the traffic had broken down, but this fortunately I only knew that the next day ! We were really more than lucky. The buses with Elton fans arrived after two songs too and the whole concert hall was full.

The show was absolutely great ! what a genius and a great artist. I have never seen somebody playing piano as he did, with rather very short fingers. They litterally dansed on the keys ! We could see it on a huge screen. He also was very sympathic and real friendly with the public, after each song he stood up and thanked. The applause was consequently !

I tried to make some pictures and was quiet proud of the result because I have a very small camera a Sony Cyber-shot DSC-T 300, put it didn't let me down ... 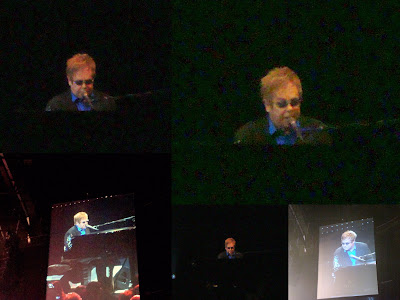 µ
what a voice ! I didn't record any song, because there are much better videos in the Internet. 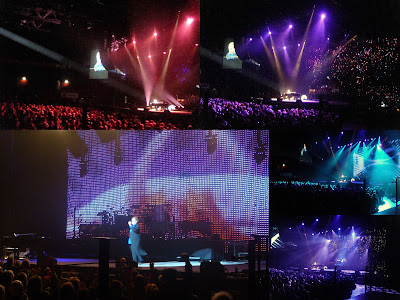 the lights for all songs were different and very well done 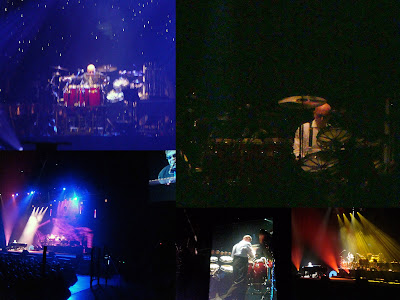 He was accompagnied by Ray Cooper a genius of a percussionist, I had never seen somebody playing like him on drums and cymbals and I don't know what else in my whole life !

Just have a look here. It can't be described with words. 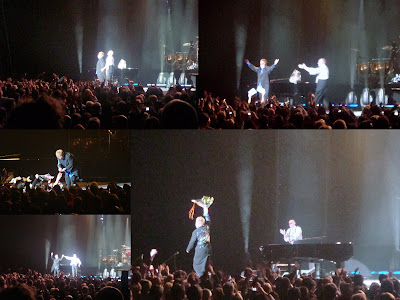 and after more than 2 h of singing without any break, he signed lots of autographs and then waved good bye.

It was certainly the best concert I have seen in a long time !

I had already seen him in 1986 or something when he had been in Brussels, but of course at that time he was completely different !
Posted by Gattina at 06:00

Sounds like you had a great night out. He sure is a great performer.

I don't think Elton John ever disappoints his fans.
His work is always wonderful and he seems like a very nice person in real life as well.
He seems to do lots of nice things for people.
I am glad you had fun and enjoyed his show.:)

ya know when he got up and sang Goodbye England's Rose at princess Diana's funeral in front of half the world... how do you do that. Die of nerves, I would.

Well I'm clean as a whistle, believe it or not. Off me head on nothing at all!!!!

It's pretty fantastic. No more of that crap I was into.

Didya get snow? About 2 days ago?? We did. London was like an ice-rink!

Blogtrotter Two is in the Valley of Kings waiting for you!! No photos allowed inside the tombs, sorry… Enjoy and have a great week!

Renny saw Elton John in concert about 10 years ago. Seems like not that long LOL. It was a really great experience for him. I love Elton Johns music and envy you this chance :-) Your little camera did good too!

did you feel like a kid again? heh heh. jealous