One of my painting class mates got a letter from the Belgian transport administration, informing her that her licence plate has to be renewed because they had invented a new one, and slowly, slowly we all have to change.

Honnestly I don't see any difference between the old and the new because the letters are still in red on a white background. That's again the European Union who can't come to an agreement on a licence plate model which would suit to all concerned countries.
Michelle did what was requested, she filled in a formular with all the informations and sent it back.

After a while she got an answer that she would have to come personally to this office, which btw is in Brussels and about 20 km far from her home. An employee told her that she has to come with her car and fill in the formular in his office and give him her old licence plate. When she asked how she should drive back home, without licence plate which is illegal and would cause her quiet some troubles, nevertheless the employee suggested her just to drive without licence plate and this for 3 weeks the time it would take to make a new one. I wonder if they are handmade. .

I know that people working for the government are not especially gifted with an extraordinary IQ, at least in this country, but this, I think just takes the biscuit !

The old and new Belgian licence plate, they love red ! 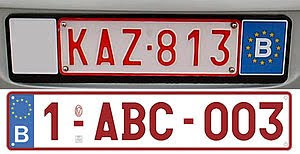 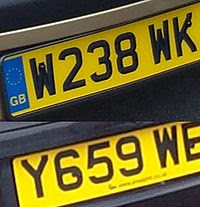 and the UK love yellow

and Germany, love it in black and white !

The same happened with the passport color. After 15 years they came to an agreement. The passports should be in auburn, indeed they are but all countries in a different shade and material ! Carton for the Germans, plastic for the rest.
Posted by Gattina at 06:00

ROFLMAO...I thought they worked only here in the States LOL Amazing to me. Thanks for giving me a chuckle tonight :)

Hi Gattina! And then what do they expect the French to do? Belgian jokes... :)

Blogtrotter Two has started to cruise the Nile for you, but without the famous Belgian Hercule Poirot... ;) Enjoy and have a great week!

I think there is someone sitting around in some office somewhere coming up with these things!

This is just to cause people trouble How annoying!! She should tell them to give her a letter saying they advised her to drive without a license plate. Otherwise she might get into some doo doo.

Sara at Come Away With Me said...

Bureaucracy at its finest!

(I stopped by from Willow's Cottage)...

Only they would think of these crazy things!! Sounds like some of the things that happens here!! Haha!!

Public servant red tape must be in all countries but that sounds ridiculous. our plates are what ever colour you want at an extra cost, Normal ones are maroon writing on white background. I love your collection.