THE PERFECT SENSE OF DIRECTION

The weather was quite cool, but I wanted to go out and decided to spent a little visit to Ikea. I didn't need anything but I like to walk around and have a coffee there. As I had been there many times, I was sure that I wouldn't need my Madame GPS and went on the highway. The normal way I had to do is on the map of Brussels (below) indicated in red. Very easy to find, for normal people, but apparently not for me. Ikea is located on a chaussee de Mons (Mons Avenue) which is very long. It leads from Brussels to the city of Mons which is about 50 km (31 miles) far.

I peacefully drove on the highway, saw the exit and left. As soon as I had done this I realized that I had taken one exit too early and found myself in a completely unknown area. I fixed Madame GPS on her support, thought in a logical way and invented a house number on Mons avenue. For an unknow reason I selected 560. Madam GPS told me : turn left, turn right, enter roundabout etc. and finally "arriving at destination on right" The destination I found was not Ikea at all it was in front of a big Renault garage and close to Brussels center !

Brussels has 19 municipalities. Normally I had to go to n° 1 on the red line. 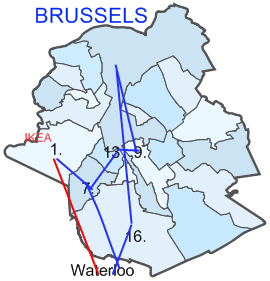 The "sightseeing" I did.

Instead I went to n° 7 from there to n° 13 where I realized that I was wrong. My second choice took me up to n° 4, which suddenly was the South station where I usually go on Sunday mornings on the market. From n° 9 on I was completely lost and as it was quite late I thought there is only one thing to do : push on the button and tell Madame GPS to go home ! I was already more then 1 1/2 h underway instead of 20 min. I had done a very nice sightseeing. I had been in parts of Brussels I had never seen before and had even discovered a port and a canal with lots of little ships.

Satisfied with myself I pushed on "go home" and followed the instructions. Suddenly I found myself in a quite beautiful area with old houses and a colorful market ! I parked my car where it was not allowed to park (that I realized later) took my camera and went to the market.

where I took these pictures.

At this moment Mr. G called me. He thought I was in Waterloo. I said, no I am in St. Gilles.

I walked a little around the market and then got back to my car, where I noticed that the parking was reserved for the police, their office was just in front. A safer place I couldn't have find. Once again I pushed the button on "go home" and Madame GPS this time, guided me safely.

ROFLMAO...at least you got some great pictures...I'm rolling with laughter on this :) Madam GPS needs an overhaul I would say...well either that Or Madam Chat does LOL

Well that is one way of seeing new places.On our GPS "phillipa" if we don't put in any number she takes you to the middle of the street and then you can drive up and down and hope to find your destination and also hope that it is not a street kilometres long.

Oh a lovely day in the car! lol! I have no sense of direction either. Glad you got home safe and sound!

I am such a fraidy cat.. I would have been terrified if i was in a place i did not know, or how to get back.. But you did see alot of new things. I am not one to step to far out of my comfort zone. I go the same places over and over.. lol

This sounds like something that would happen to me!

At least you got some beautiful pictures!

Nothing like using a GPS to help you stay lost.

I like have a walk in Ikea too sometimes!!!I imagine it must not be easy to drive in a big town like Brussels!!! Here Toulon is quiet a small town and I have no problem but when I go to Marseille I prefer taking the train because I loose easely the good direction!

It sounds like your sense of direction is like mine. I get lost easily, but like you I make the best out of the situation. The important thing is that you founds something fun to do while you were out exploring!

This is the SECOND hilarious time you have gotten lost going to IKEA! I think you should learn to keep Madame GPS on allllllllllll the time! You are a hoot!

If I were your Mr. G I would take your GPS gal pal away from you before she took you somewhere you could get into trouble.

A long way for a coffee! Did you eventually get a coffee? Perhaps the police might have offered you one...lol.