For the first Show & Tell this new year, I show you the different things we should have eaten the whole evening while awaiting midnight.

When the plates were prepared I put them on the table to make a picture. Rosie (in the background) tried to sniff if there was something interesting for her. 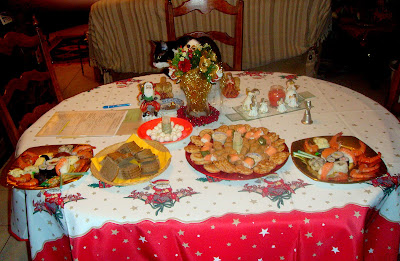 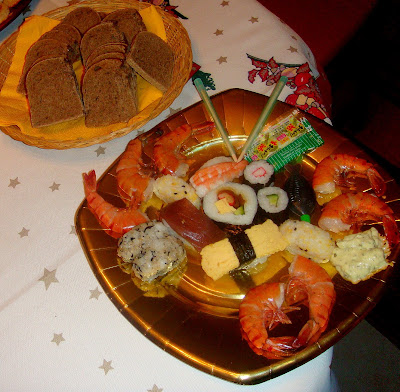 I had bought sushis, that's easy to prepare and shrimps. The bread is something special it's called oister bread and is made with oisters. It tastes very good ! 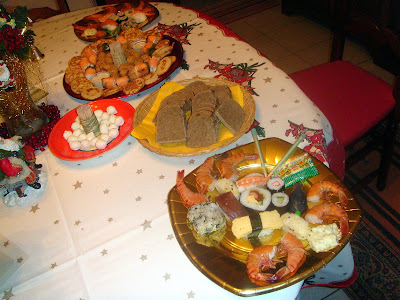 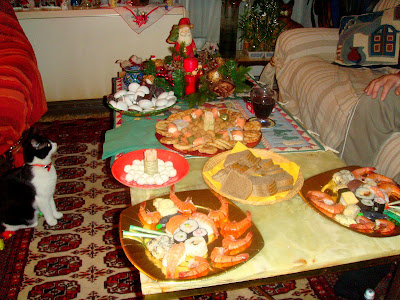 the little white balls are goat cheese and on the plate behind there are rolls filled with goat cheese and wrapped in thin salmon slices. In the middle are "meat" balls but the meat was replaced with salmon to be dipped in a special sauce. Rosie was intrigued. 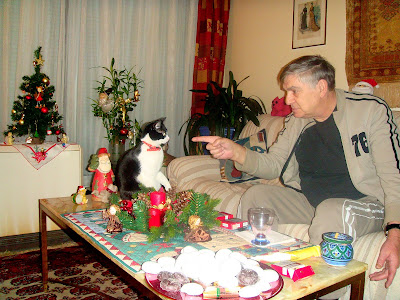 She attacked Mr. Gattino when he told her to leave the table !

But then our so nicely prepared New Year's eve didn't take place ! Mr. Gattino suddenly felt sick and went to bed, he had gotten a flew shot in the afternoon ! That was at 8.30 pm ! I tried to stay up until midnight and nibbled at some of the stuff, but at 10.30 I noticed that I was falling asleep all 5 min while watching a movie on TV. I decided to join the rest of the world who had already celebrated midnight, like my Australian friends, and went to bed at 11 !

That was the first time in my life that I missed midnight on a New Year's Eve ! I also hope it was the last time !
Posted by Gattina at 06:00

To me the foods you served are very exotic...not sure I'd even go for goat cheese. Just getting past the smell is enough to gag me. LOLOLOL

Yes ! So yummy! It looks very delicious! And Rosy couldn't find her selfcontrol in front of it! sure!

Oh my dear, that picture of Rosie and Mr. Gattino is hilarious! Hope he is feeling better today.
Our New Years was nice, but very quiet at the end.

The pic of your kitty and your dh are just priceless! I think you could win a photo contest with that one!

Rosie probably cast a SPELL on Mr. Gattino! Shame on him shaking his finger at her! Goodness me... I can't count how many new year's I have not seen in due to my own snoring... I missed this one too -- but I'll catch another one - maybe next time! That food all looks GREAT! THAT probably would have kept me up!

Yum, that shrimp looks so good. I got sick when I got my flu shot too. I hope that everyone is feeling good now. Thanks for sharing. Happy Show 'n Tell Friday!

And after you fell asleep, your cats could nip off the plates as much as they wanted, I presume? Heehee! The food looked great Gattina!

Hehehe with all that lovely sea food how can you blame Rosie for wanting a bite!! No cat can resist such yummies!! Looks wonderful! Happy New year!

I went to bed at nine.
On new years we fondued shrimp as well as beef.

New year really hit me this year. It's always been just another day for me, but this time, when the clock turned, and auld land signe started playing, it really hit me in the gut, deep down, and made me think, there momentarily about all the years and friends and family and acquaintances that I've known. It's a special moment.

Gattina, is it oister (new ingredient? never heard of it) or oyster? I'm very curious. :P

Hope Mr Gattino is feeling better. He missed eating those delicious food. Wish I was nearby to help you finish the food. hehe....

the food looks really delicious... sorry to hear about that- yes, please do not sleep over new year's again.that happened to me once too where we didn't celebrate it and i won't do it ever again!!!
I hope Mr. Gattino is fine now and is doing well.
Btw, I love goat cheese, I bought some from Carrefour when we were over the boarder in Eupen.