CHIEF EVERGREEN TREE
In 1971 my mothers sister invited us for the first time to Madison/Wisc where she lived after her marriage with an American soldier who had fallen in love with this German girl. That was in 1948. America was far away from Europe another world and people only went there to immigrate, certainly not for tourism. In 1971 there were no European tourists and we had to fill in and sign miles of papers to prove that we were invited and had no intention to stay there.

We had to prove that we were no communists, terrorists, mafia members or drug dealers. My aunt and uncle on their side had to go to an attorny who put up a document signed by both, that they will take entire responsiblities of these strange european relatives in case they intend to kill the president. We sweared on all heads and bibles of the world and flew over in August 1971.


Once there, amongst a 8.000 km (5.000 miles) long trip through the States, they also took us to WISCONSIN DELLS to watch an Indian Show for the first time in our life. And there we met Chief EVERGREEN TREE. He was an old Indian of 81 years and still performed in the show as a bird song imitator which he did amazingly well. Everybody was convinced that it was real birds.

After the show I tried to get closer to him and also take a picture and was really lucky. He apparently had heard that we spoke german and suddenly came over to us. Chief Evergreen was an amazing man, I only remember that I was fascinated and full of admiration (which doesn't happen very often) and he said to us "German people say "auf Wiedersehen" and french people say "au revoir" when we left. 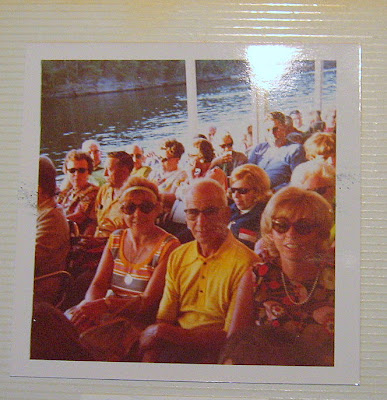 on the boat to Wisconsin Dells, my aunt, uncle and me 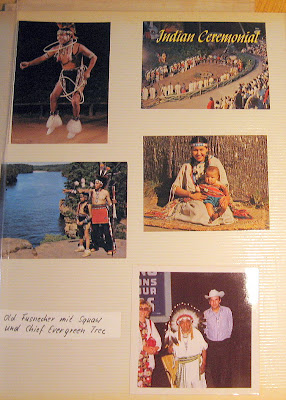 some pictures of the show 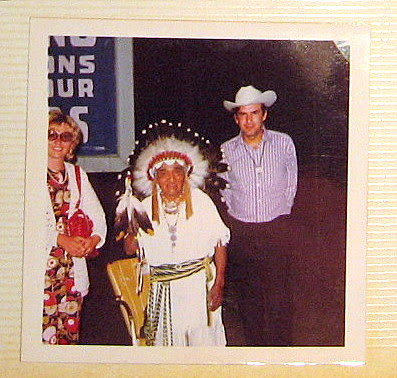 Chief Evergreen Tree with Mr. Gattino and me 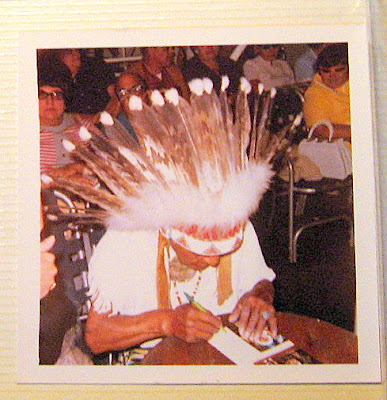 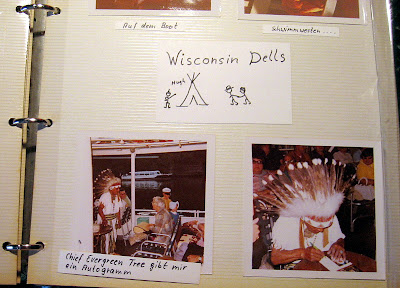 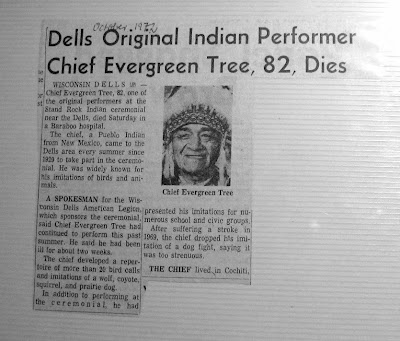 After this first visit we have been there several times not only for the show but also for the beautiful landscape. And this time we were three, our son had to discover Wisconsin Dells and when we arrived to attend the show, he asked all Indians he could approach (promoted to Native Americans) if there was a son from Chief Evergreen Tree or a grand child and amazingly he found one !

We had told him so much about him that he wanted to find someone of his family.

The show is still as nice as it was the only difference is, there are a lot of European tourists now !

Wow, I love your take on the theme. Great photos.

What a nice story and love your pictures, your large sunglasses are "in" again now!!
I love that area of the US!
happy monday :)

Ugh! I don't know WHAT is going on! I can see the story but not the pictures... how sad I am! I must get to the grocery store now so I can cook some dinner tonight, but I will come back to see if I can find the pictures when I return! HOW COOL that your son found a son a the old Chief!!!

Great story, but I can't see the pictures either !!
Hope you are well.
Take care, Meow

Great story, but sorry I have to repeat what they've said I cannot see the pictures too, I have Explorer 7 and Firefox as browsers.Both won'T show your pictures.
Hey by the way, now I know why your name is Gattina, or so I think, while in Tuscany, I learned the word Gatta/Gatti... :)
Sorry to hear about your old blog, that must have caught you a lot of stress.

Sorry about the pictures. Again i don't know what happens. They all appeared perfectly when I published. Now looking in the bowles of my post all htmls of my pictures had disappeared and only the text were left ! A good start for a new blog apparently also bewitched !

Well this was interesting :)
One of my aunts married the son of an Indian chief but I never knew which clan or tribe he was.They lived in georgia and texas.
He was a very nice man. Very tall and quiet and I seem to remember my aunt telling us they had a boat and went fishing in the Gulf of Mexico all summer.
Later on they developed serious joint pains and I wonder if it was from the fish they ate or maybe some other environment problem.
Well now both husband and wife died. So I guess I will never know from which tribe he was.:(