On Monday I had to go to the post office ! it had been a long time I hadn't bought stamps or sent letters, I always do everything per email. I remembered that I had to take a ticket and wait until the number appeared on a screen.

The four counters were occupied by one employee, but the usually crowded post office was empty, there was only one man standing there and he asked me if he could take a ticket first. He said  he was the only one when he arrived and  thought he wouldn't need a ticket, but administration is administration and there are rules to be respected, a ticket had to be presented even if there was only one person in the whole office !

I shook my head and gave her my envelope payed and left. Then I went to the pharmacy to pick up my medication and the girl asked me if I can't read ? How friendly was that ? I asked why and she told me that I have to wear a mask ! it was written at the door.

What happens to people, since the lockdown they are all in bad mood ! Outside I took the mask off and went home where nobody bothered me with  bad mood !

Next day I did my shopping for the week and as the weather was again beautiful, I took my computer outside on the terrace and sat there the whole afternoon. I had a few phone calls, my son is still not feeling well and stays in bed with his Covid ! Toby feels better !

Isabelle my ancient neighbor who always calls nearly every day, like a daughter to see how I feel, goes to Amsterdam the next day and she told me that it is a pity that she can't see Dario who wanted to show her around. They know each other since their childhood and made a lot of naughty things together !

The case for my new Samsung tablet had arrived and it looks not only good, but is exactly what I and the tablet wanted ! 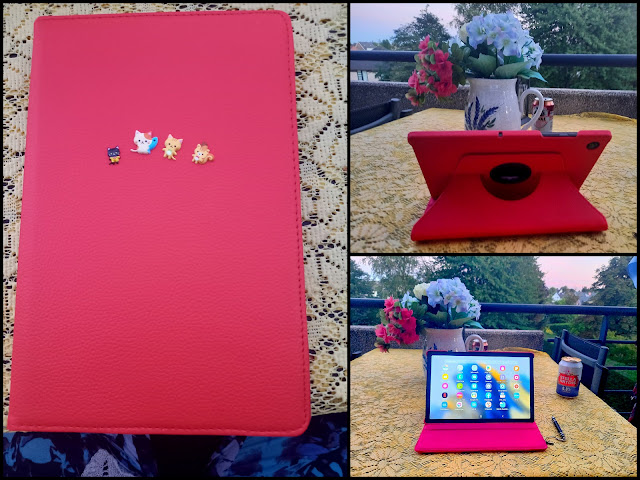 I took these pictures at 11 pm, it was so nice and warm outside and our garden is illuminated that's why I also have some light and can watch the animals which cross the lawn. But this evening I didn't see anybody. Not even a cat ! There is one who looks exactly like our white cat Arthur, he must live somewhere around here.

Then came the hottest day of week ! Up to 35°C ! Unbearable ! Suddenly I remembered what an American Blog friend had written in her comment once, that when she was little and her parents had no air conditioning they just spent the day in shopping centers which was cool and nice ! 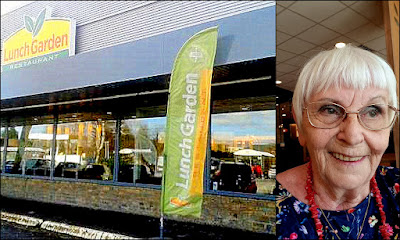 I thought that's a great idea, we are always used to protect us from the cold and people go in the shopping centers to save heating costs, why shouldn't I do the same for the heat, just the other way around protecting me from the heat. Of course my neighbor and Nicole where very enthusiastic about this idea, and we picked up Nicole and then Adeline and I went to the hairdresser first and then joined Nicole who was happy to sit in 24° ! and drank her coffee.

We spent the whole afternoon there and returned around 6 pm when it was a bit cooler, was a nice day !

And to end the 5 days, from 35° we dropped to 22° the next day and when I just had started to blog on my terrace I had to move inside because it started to rain ! 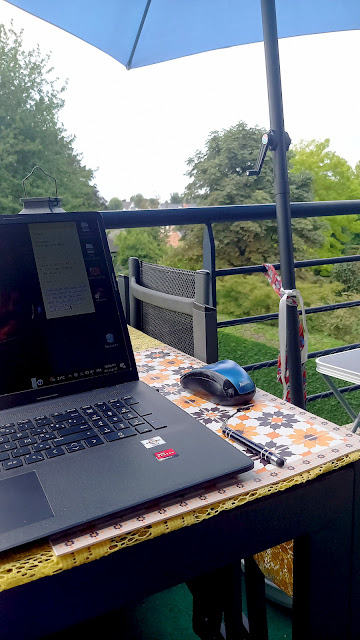 Nothing else happened, I still have not the energy and courage to empty Rick's bags, and wardrobe, well one day it will happen ! Meanwhile 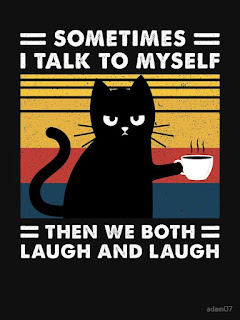 more participants at Susanne at Living to tell the Story.
If you have difficulties to comment, just scroll down to :
Subscribe to: Post Comments (Atom)
click on it and then you can comment !
I have the same on other blogs and it took me quite some time to find out !
Posted by Gattina at 06:30