1. After my nice weekend I had to do some housework as my cleaning lady is on holidays.
That's something which has to be done but which I don't like at all, but at least the bathroom and toilet have to be clean, because there people have time to look in the corners. 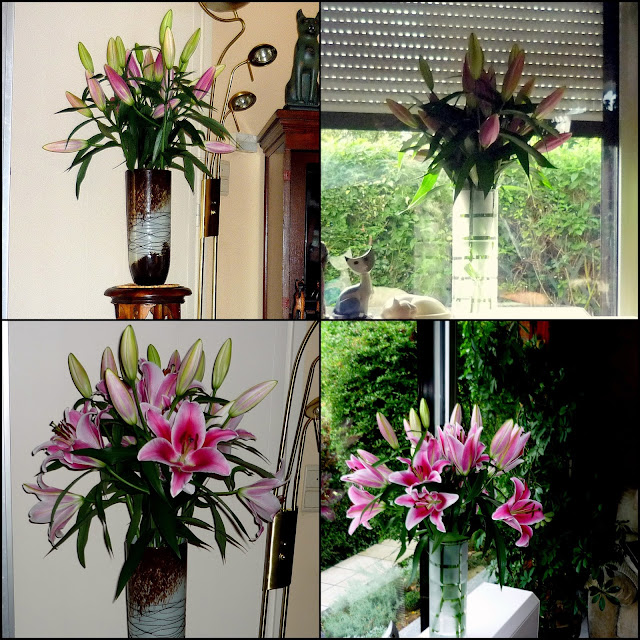 My son had offered me two bouquets of these beautiful flowers. They were closed but 2 days later
they were in full bloom.

2. I had installed my "office" on the terrace, the sun was shining and the birds not chirping because of the cats. 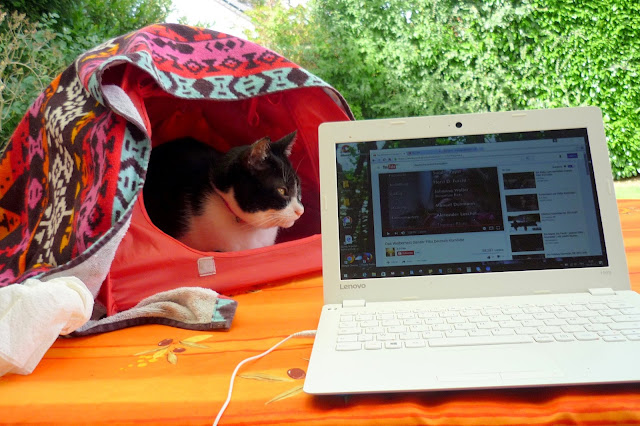 I had put my computer in the little cat tent because of the light, and Rosie who hadn't used the tent for ages discovered it and now is sleeping in it all the time and I am there with my light !

3. I hadn't seen Ilona since I came back from Amsterdam, and she came for a cup of coffee, she had to be in Waterloo, finally the bank had given access to her Mother's bank accounts ! Her mother had passed away in May !! When it comes to inheritance the Belgian State is as quick as a snail ! For taxes to be paid he is a like a Ferrari ! Now everything is settled except the apartment. There the State has still to calculate taxes etc. It's crazy here !

4. It was a long time that I didn't have Chinese food and Nicole and I decided to go to the "Asian Garden" (Jardin d'Asie) they have a beautiful garden indeed and we could sit outside and have our menu. It was delicious. For Mr. G. I asked a Take away, which he had as supper. Cat Arthur helped him with the meat ! 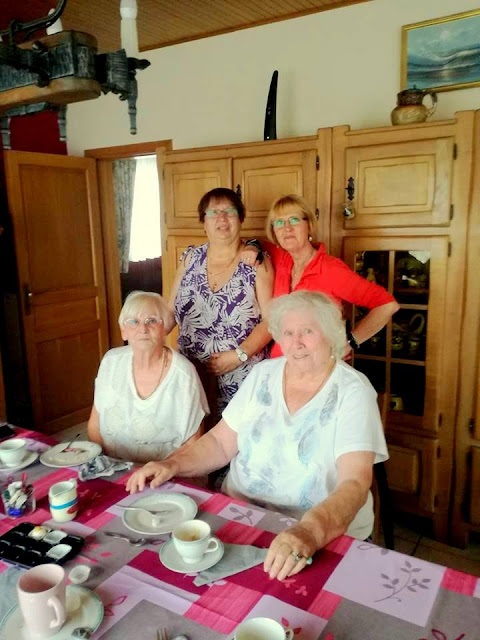 In the afternoon I was invited by a Facebook girl, whom I had virtually met on "Vivre à Waterloo" the page of my city. Then we had met life when the group had their meetings. 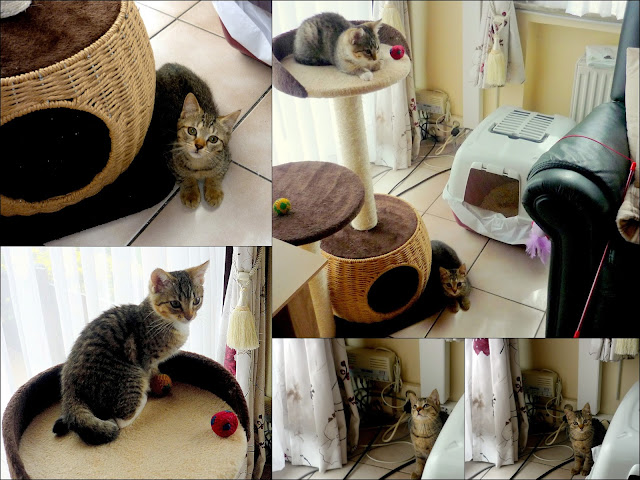 She had adopted two kitten and wanted to show them to me. There were two other members of the Facebook group I knew too and after having admired the little kitten we had self baked cake and a good chat ! This is really a positive side of Facebook.

5. When I wanted to prepare my posts for tomorrow, the internet broke down and we also were without telephone. Why couldn't it break down when we had our scrabble in the afternoon ? This time it was at Ilona's,  and we were 5. As usual Mireille the one who is half blind, won and I was 3rd. Not so bad. When I came back I had to finish this post and answer emails ! Usually in the evening I close my "office".

Your lillies are gorgeous. Having fresh flowers in the home sure lends a festive air. And how lovely that your son gave them to you.

When I don't have time and/or energy to give all the house a good clean, I, too, always clean the bathroom. A clean bathroom always makes me happy.

Have a great week, Gattina.

When I saw those beautiful Lillies in my reader, I knew I had to come over and comment! Gorgeous! So glad you had time with Toby and then to come home for a little girls time, and Chinese food! As usual, Rosie is a beauty! Have a wonderful weekend!

the foowers are absolutely beautiful!!

it looks like a great place to have an office! on a terrace with your beloved cat.

YEAH for Asian food! we had some this past week too....yummy!!

have a wonderful relaxing weekend!

your flowers are beautiful! what a nice son! how fun to meet up with some new facebook friends!

I love your office idea! Mine is usually on the sofa in the lounge but it does move around the house too. Beautiful flowers. I like the look of lilies but am not so keen on their fragrance. Why is it cats never use a bed if you provide it unless they think they're not allowed to use it?

Your photos are beautiful and how fun that you got to meet a Facebooker in person. I have a list of my blogger pals that I'd like to meet some day. I love your outdoor office. Too bad your kitty reclaimed the tent. That is a clever idea!

I can't say I like cleaning, either, but I like the results. The flowers are beautiful! I had never seen a cat tent before. It would be useful for a lot of things! You had some nice visits.

The lilies your son blessed you with are beautiful. And of course, I love that Rosie annexed the tent which you needed for your computer! Oh why can't we South Africans be more like Europeans. I think a Facebook group and people meeting in real life is a wonderful idea. I loved the little kittens. Did she adopt two? are they identical?

The scent of the lilies just fills the room, doesn't it. So beautiful. 😊

That's just like a cat. As soon as you want to use something they come along and sit or lay on it. They want you to know who is in charge.

I love that kitty tent. Rosie looks very comfy in there :-) The kittens at your FB friend are so adorable! The cat tree is very cute, too. Never seen tree like this!

Those are lovely lilies from your son!
Your 'new' facebook to face-to-face friend has adorable kittens.
I like your outdoor office-I hope it wasn't too hot this week.

Sweet cats! Oh the lilies are beautiful! I got some like that for Mother's Day. What a lovely dinner out too...I enjoy Chinese food at least once a month. Great post! Hope you have a great weekend.

Such beautiful lilies! And those little cats are so cute. Chinese food is always a hit around here although sadly, our favorite restaurant closed and we've yet to find anything nearby that is as good. Hope you are having a great Saturday!

you are always so busy and have so much fun with your friends! This is probably a really stupid question, but in which language does your group play Scrabble? (I am sure Toby would think it was a stupid question. ;>)))

Oh my goodness those lilies are gorgeous! You kitty and the tent made me laugh. They are so funny.

Ha! A garden office outdoors in summer is great, laughed at your cat taking back the cat house! Looks a full and busy week with no cleaner and no internet - you have remained very chirpy surrounded by friends, flowers, and fine food what's not to enjoy?! Have a fun week
Wren x