1. The Hodgepodge lands on June 14th this week, Flag Day in the US of A. Do you fly your country's flag at home? Sometimes, often, or every single day? Have you ever visited the city of Brotherly Love (Philadelphia)? Did you make a point of seeing The Betsy Ross House? Have you ever made a trip to Baltimore? If so, was Fort McHenry on your itinerary? (where Francis Scott Key was inspired to write The Star Spangled Banner)

It's quite unusual to fly the Belgium flag in private houses. Most of the population doesn't even have a flag. They are hanging on official buildings, some elderly people put a flag out on National day, but only very few. I wouldn't even know where to buy a flag !

2. Red flag or white flag? Which have you encountered most recently? Explain.

Honestly I don't pay any attention to flags. I know the colors of the Belgian and the German flag, because they have the same color only one has horizontal and one vertical stripes

No idea, anyway if I am in a hurry I wouldn't stay until the end of the song. I would stay maybe for a song of Freddy Mercury !

4. What are some of the traits or qualities you think a good dad possesses? In other words, what makes a good dad? What's an expression you associate with your father?

A good Dad plays and spends time with his child equally like a mother. My father only took care of the material needs, to pay was easier then spend time with a kid.

5. What's one rule you always disagreed with while growing up? Is that rule somehow still part of your adult life? Is that a good or bad thing?

I think I always have disagreed with rules or authority and that has never changed. I was and am a rebel. No idea if it's a good or a bad thing !

The sun is shining and it's warm, so I am thinking what to do this afternoon, there is already a holiday feeling in the air ! 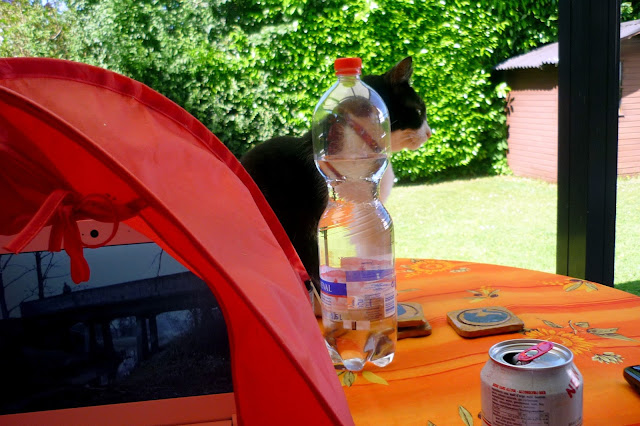 I do own a flag, albeit only a Norwegian one! I do have several small flags that I fly on Eurovision, but that's it.

Hi there from the OTHER side of the pond!
I'm so glad you stopped by to share your photos at https://image-in-ing.blogspot.com/2017/06/pretty-view-in-ladies-loo.html

I own a small flag that I use in the summer.

I have always wanted to get a Flag to fly in front of our home but since we rent our home I am waiting till we purchase a home. Which is in the works and I just hope we find one soon as I would like to be moved in before school begins.

I loved seeing Rosie in the photo. And like you in No 3, I would stay to listen to Barcelona by Freddy Mercury and Monstserrat Caballe. I am SO glad you have a sunny day. It's a week off the middle of winter here, and we still enjoy warm days.

I don't own a flag either, I actually don't know anybody who does fly a flag locally.

I forgot it was flag day...Coffee is on