1. Good things come quickly to an end and Monday was my last day of my Egyptian holidays ! It was as if the hotel celebrated my departure because they started the morning with a special event. 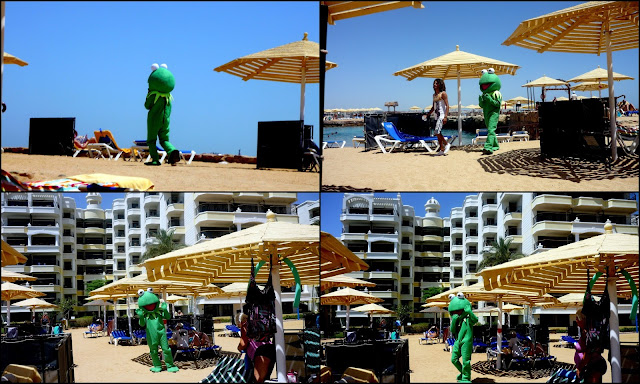 First a frog showed up and greeted the guests, 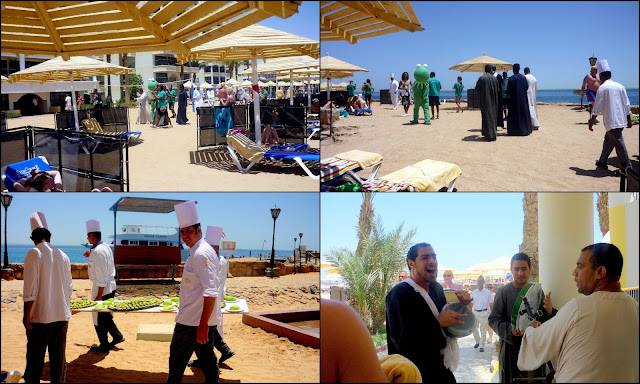 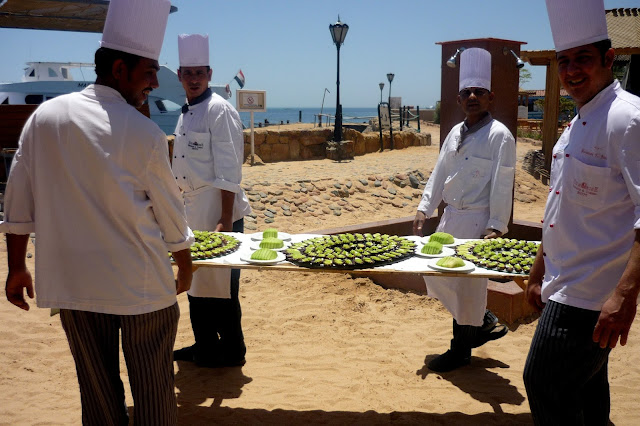 Followed by the staff making local music and the cooks carrying the tray around the beach. 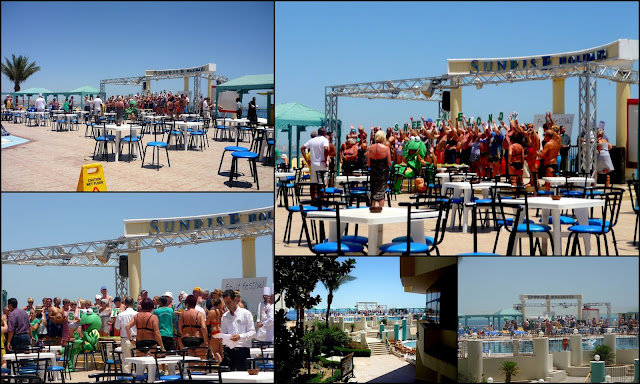 Arriving at the swimming pool it turned out that it was a "Fruit Festival" ! Fruits and also the food is delicious in this hotel, our so said "organic" was tasteless against it ! All guests agreed to that !

3. I spent the morning at the beach and said good bye and then dressed for "winter" and  had my last lunch there. At 2 am I was picked up by a bus and driven to the airport.

This time it went a little quicker and I only had to take off my shoes twice, I didn't ring when I went through the scan so everything went smooth. As I went to Brussels the plane was full of Belgians. I don't know but I was less controlled with my German passport and apparently was less suspicious than the Belgians, probably because of the terrorists who lived in Brussels ! Mr. G. picked me up and we were at home at 11 pm.

4. The next day the sun was shining fortunately, so it was less harder to get used to the colder weather ! 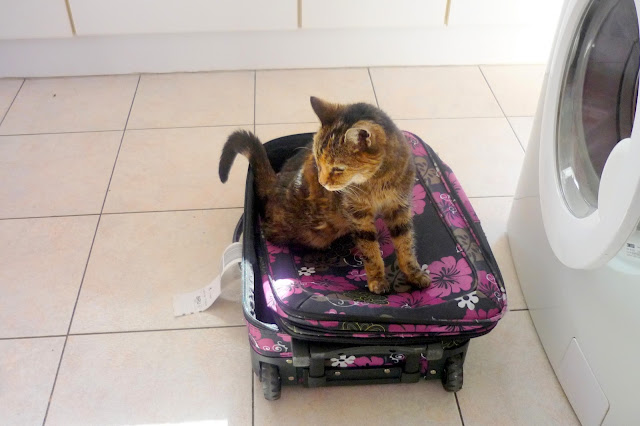 Once I had unpacked my suitcase, Pookie took the opportunity and choose it as her new bed !

The afternoon I spent with Nicole on her terrace it was nice and warm and I told her about my holidays ! In November she will come with me because then I return !!

5. During our painting class, I didn't paint very much I mostly told about my holidays ! 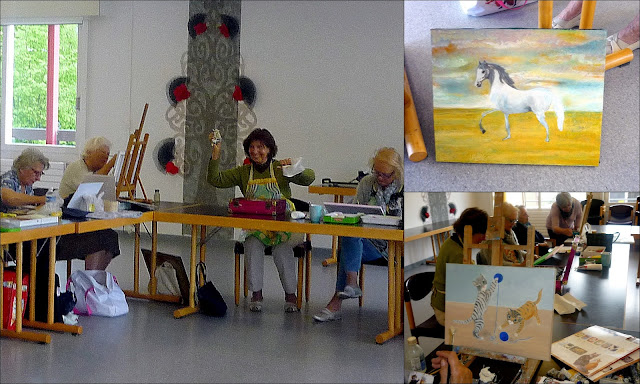 Nicole had retouched the sky of her horse painting and suddenly her horse had only 3 legs, the sky had covered the 4th ! We had a lot of fun with her horse because first it had 4 legs which were wrong then she added two legs which made 6 and then she took two away and had four and because of her sky she ended up with 3 ! That's why she is laughing so much and we too when we saw her master piece !

linking to Willy Nilly Friday five
Posted by Gattina at 07:00

You did well to get back into the swing of things so quickly after your wonderful holiday.

Oh how fun to spend time in Egypt. Maybe one day I will get to go there, too but Belgium is first on our list after Austria :) In just a few short weeks we will be heading to Italy...my first time!!

How lovely to get back into the routine with ease.....

I think I'd enjoy a fruit festival.

Lovely vacation! Glad you had such a wonderful time. I just cackled over the poor horse in the painting! :-)

It's a bit of a shock to the system coming home from a hot holiday and difficult to get back to normal. Glad you had a good break.

What a fun holiday! Glad everything went smoothly when you came back. Funny about the horse and the extra and then missing legs.

I bet my grand daughter would enjoy the frog or lease I would.
Coffee is on

I would have loved to have seen that horse! Nothing beats a good laugh like that in company with friends.
Your cover photo is fabulous - I've been planning a rock garden and you have really inspired me.
Fil @ Fil’s Place

Love the photo of Pooki on the suitcase! My kitties love using suitcase as beds, too, so it stays outside closet for a while after each trip :-)

Nicole and her painting made me laugh. Too fun. Adjusting back after holidays is hard even in summer never mind going from a hot holiday to a cold home.Sounds like it was a wonderful time though!

Your Egyptian holiday sounds like it was a great and sunny time. I'm amazed at how quickly you adjusted back to Belgian time and schedule.
Funny story about the horse's legs!

Glad you had a fine holiday in Egypt.

I'm glad you had a good holiday and hopefully it's warmer now in Belgium. That poor horse! Did he ever get 4 legs? Cats are so adaptable with their beds.

Utmost admiration for the way you just jumped right back into your regular activities, with no recovery time needed! Glad you had fun and that the weather wasn't too bad when you got back from Paradise!

Glad you enjoyed your say in Egypt. Yes, I agree that time flies when you are having a lot of fun.

some fantastically colourful photos, thanks for sharing with us for Five on Friday :)