1. The week started a day later because of Easter Monday and we arrived around 5 pm from Amsterdam to Waterloo. It took us a little more than 2 h which wasn't bad. I thought there would have been much more traffic because people went home from a long weekend but apparently not in our direction.

2. When I opened the shutters the next morning it snowed ! I immediately wanted to return into my bed and close shutters and eyes ! 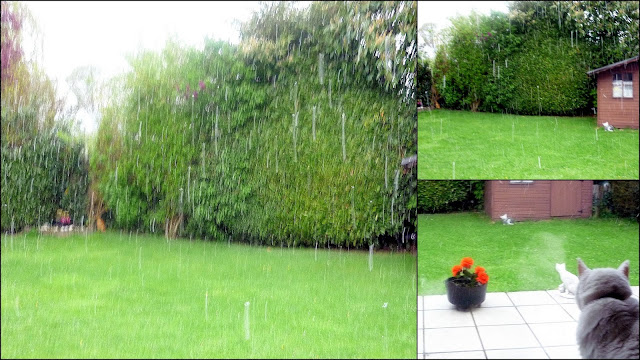 Even cat Arthur could hardly believe what he saw ! Instead I decided to put on my fleece jogging and be in a bad mood the whole day. I thought this dammit winter was over and now it starts again with temperatures below 0°C !

3. Fortunately School holidays were over so at least I could go to aqua gym. This time we had a young girl who did the exercises with us and I found her much better than our regular one, because she let us make the exercises on the rhythm of music. Our usual teacher also puts on music, but I don't know what it is it sounds as if the notes are played backwards, and somebody makes primate cries or you think somebody gets strangled. Sometimes there are a phrase which is impossible to understand. At least I understood "I have money, I have money etc etc always the same scream. We decided to ask him to do the same as the girl when he comes back.

4. For the first time I went to the Bois de Hal,  to see the blue flower carpet, although this happens each year, I didn't know !! I had been to this wood before but never to see the bluebells.

The Bois de Hal is also named ‘The Blue Forest’ – thanks to the beautiful purple carpet of bluebells, which usually bloom around mid-April, but this year they were blooming already beginning April and these were the last days.  There are also giant Sequoia trees and even without the blue carpet it is a beautiful wood surrounding Brussels. 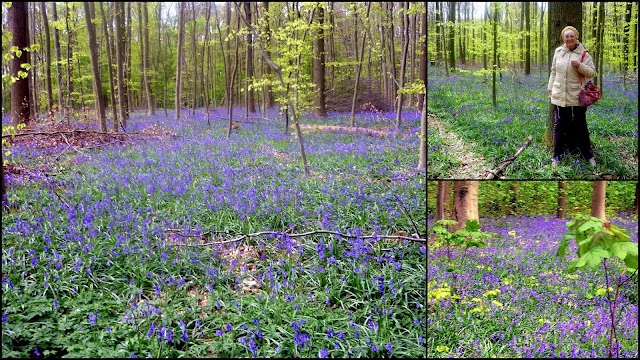 It looks stunning when you walk through the wood !

5. Painting class has started again too, but we were all not very motivated. For chatting of course, because we hadn't seen each other for 3 weeks !There were lots of things which had happened.

Nicole had discovered a new Restaurant called Soho,I really don't know why.It was supposed to have a huge buffet with all kind of international food. There was Chinese and French, because when I wanted to take a few shrimps, there were frog legs laying just besides. Except the frog legs I tried a little bit from everything, the salmon was delicious and probably everybody would find something to eat. What I didn't like was the inside of this huge restaurant which looked like a canteen of a company. It wasn't cozy at all I would rather call it functional. 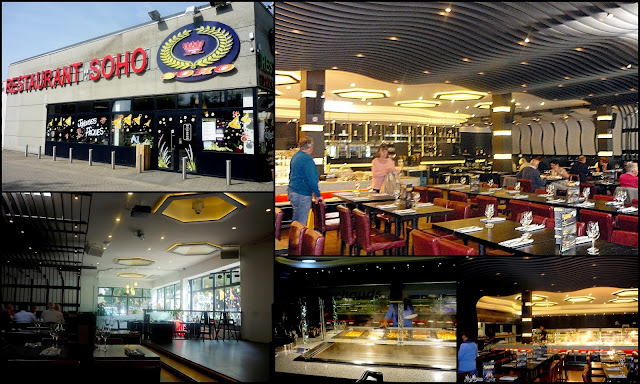 At least I tried it, and now I know that I certainly won't go back if I am not obliged too !

The bluebells are very pretty. I don't mind the interior of the restaurant. It modern, clean and bright, with comfortable looking chairs. The ceiling seems to have an acoustic material to keep the noise level lower.

I would have left the frog legs alone too. Shame about the snow, the weather here is perfect but alas no bluebell woods.

Our bluebells are now at there best, I do like frogs legs the first time I tried them I was surprised to find they have a bone in them just like chicken legs, dont know why I just was

train travels, art classes, bluebell and frog legs!! sounds like you had a busy week.

I think exercise to good music is always a good motivator.

It's nice to be back here to visit you. Hope all is well.

what a nice week you had!

oh how i would love to walk through the Blue Forest!!! your pics are gorgeous!!

snow???! yikes. thank the Good Lord above NY is done with THAT stuff!!!

You've started my day with Loud Laughter. I enjoy the way you express yourself. That Blue Forest is a Wonderland of beauty . . Thank you!

I would not return to the restaurant, either - in fact, since I've never been - and was not invited . . I'm blessed - because I'll Never need to go.

Hi Gattina,
The bluebell wood looks lovely, so pretty. I'm with you on the restaurant, it does look like a large canteen. Not at all intimate or cozy which you'd expect in a restaurant.
Cathy x
Sorry not sure about the whole Google+ thing. I'm on Blogger, Blogspot. Also Bloglovin' and facebook. I do have a google account...

Hi Gattina,
The bluebell wood looks lovely, so pretty. I'm with you on the restaurant, it does look like a large canteen. Not at all intimate or cozy which you'd expect in a restaurant.
Cathy x

The bluebells are gorgeous! Your description of the music in aqua class had me chuckling.

What lovely bluebells. I've not seen many here yet. I might go looking for some this weekend.

Oh I am so sorry the weather has taken a dive again. I love the Bluebell carpet. I had to laugh at your descriptions of the music by your regular aqua gym instructor. It can't be too relaxing. I also thought the Soho restaurant interior looks like a company canteen.

Those bluebells are beautiful! We don't have anythin' that looks like that. purrs

Wow, snow in April! Hope that's all over and everything warms up soon. The bluebells are so pretty! I don't do classes at the gym, but they have very loud, not very pleasant music that spills out into the rest of the gym. It must be deafening in the classroom. We can see into the pool from the gym, but not hear it, so I don't know if they use music or not.

What a joy to visit and see those beautiful bluebells. The weather is strange at the moment here too with very low temperatures.

Snow after your Easter holiday! Yuk! I'd want to crawl back into bed too. Love that carpet of bluebells!

Oh my gosh, snow in April! That's crazy!
The Blue Forest is beautiful. The place looks like a snenery from a fairy tale :-)

The bluebells are just gorgeous!! I don't like a huge restaurant either, some place cozy is better otherwise sounds just echo.

We have a woodland park near us that has a bluebell display every year. We haven't managed to go yet this year. The restaurant definitely looks functional but maybe not friendly. We're due to get very cold weather again this week perhaps after that spring will come and stay!

Those bluebells are absolutely breath-taking. I can't believe it snowed again. But we had colder weather too this past Thursday and Friday and it rained early Saturday morning. But I am sure it will be much warmer this week.

There's nothing more stunning than a carpet of bluebells in the woods :)

The picture of the bluebells in the woods is lovely. Looks like such a peaceful place. Not fun with the snow though. We might be getting some spring snow also. I laughed at the description of the music. I don't understand some of what is called music either. LOL.

The bluebell carpet in the forest is gorgeous -- I was surprised to learn you have Sequoia trees there. I've only seen them in California -- there's a Sequoia National Park there.