1. I had a rather busy week ! For the first time since we have a garden or yard (as you wish) the grass still grew and Mr. G. who had put Oscar (the lawn mower robot) in his winter bed in the basement, had to get him out again ! 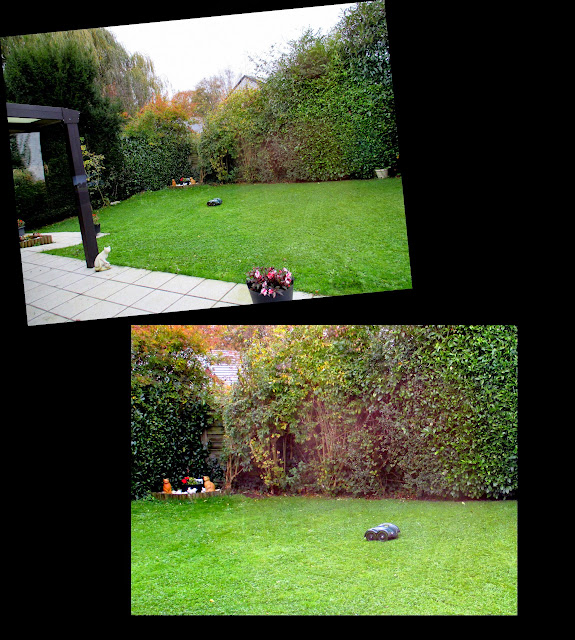 And in November poor Oscar still had to work. I sincerely hope it's now finished, and poor Mr. G. with a big sigh cleaned the thing and put it in the basement again, with the hope the grass won't start to grow in December !

2. Between running around to buy the birthday gift for our painting class administrator, blogging and doing some laundry I managed to go to Nicole for a coffee and a chat 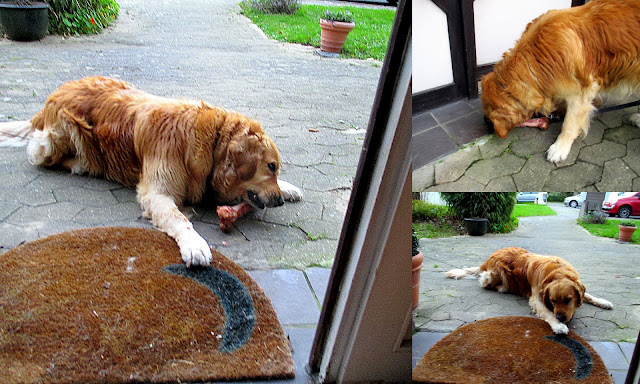 but above all to bring a new bone for Charlie. When he saw me arriving, I am sure he didn't see me but only the paper in which the bone was wrapped. Was he happy ! And in no time the bone had disappeared. There was not even one crumb laying on the floor.

3. I finally found time to do my autumn basket with only one month late ! Usually I do it end September, but as we had such a summery weather I didn't think about autumn at all. 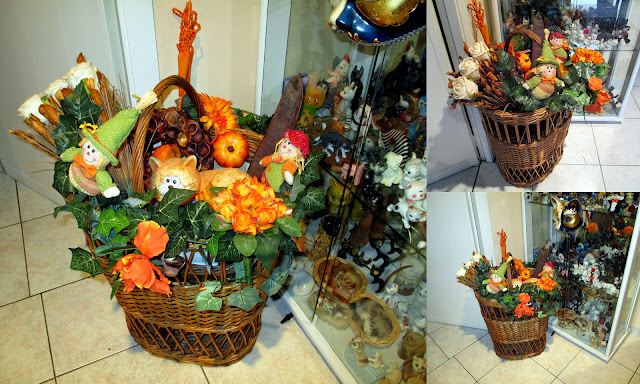 Now it stands at the entrance.

4. As birthday gift I had suggested to buy a tablet. Which I did. When I came home and wanted to set it up, I got a very strange looking screen, which looked like more than modern art. I tried to switch off the tablet, nothing to do, the thing was blocked. Useless to say that I got unnerved ! Mr. G. arrived for help and we pushed and pushed but that thing just didn't move.

I went back to the shop. They couldn't turn it off either, so they gave me a new one. At home I wanted to set it up and couldn't get in, it was password protected ! I returned again to the shop and asked to take out that password. The guy of course thought that I was a little stupid, considering my vintage age, but then had to admit that there was a password. It had been on display in the showroom and therefore had been password protected ! They reset the whole thing, I went home, tried again, and finally managed to set it up ! I made the card, put the whole stuff in a birthday bag and finally finished. Very time consuming. Poor Mr. G. nearly didn't get his 7 o' clock supper !

5. And then we had our painting class. Our 80 year old birthday girl, didn't know anything ! We started painting as usual and then around 10.30 we put up a table. Everybody had brought some goodies for the buffet and champagne for the occasion. 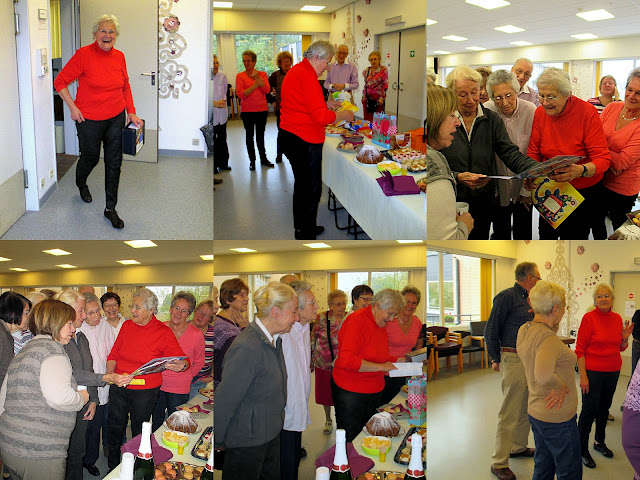 The birthday girl arrived, made big eyes and then unwrapped her gifts. She never had expected such a celebration. We all sang "Happy birthday to you" which sounded as if you had walked on a cat's tail. But never mind the good intention was there. 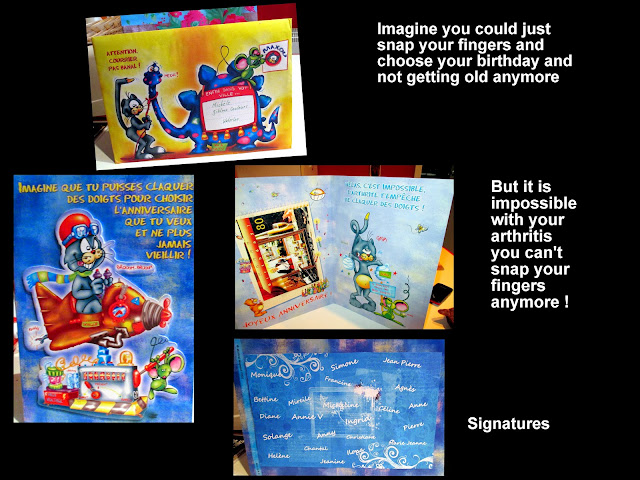 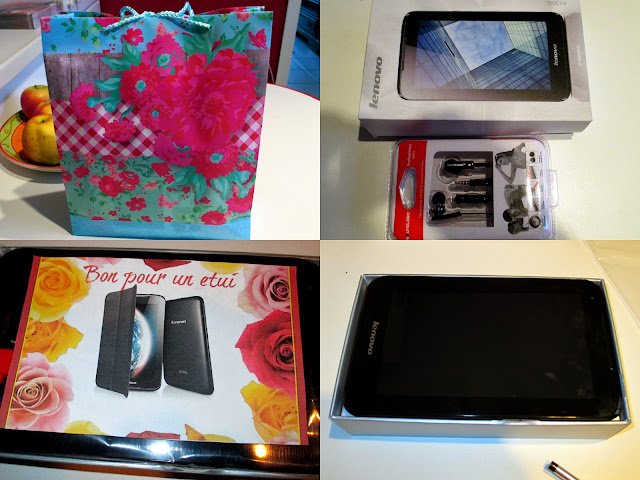 I think she was very touched and happy ! She loves tablets ! We had a lot of fun and laughter and painting was forgotten !

The afternoon I spent at home, I had some household scores to do ... folding the laundry and put it away ! Why can people walk on the moon and not invent a robot who could do that for me ??

PS.This happens when people vote for the wrong once, only to get rid of one person and its party. Maybe the previous government wasn't perfect, but who can be perfect when there is no money ? Now it's even worse ! Politicians all have a big mouth with a lot of promises before elections and then comes the ice cold shower !

Did you say champagne? I believe you did. I'm my most favorite cold adult beverage.

Have a fabulous day. ☺

What a great birthday party! And a good week all around. I thought the last link was going to be about the USA midterm elections -- we are in a big mess here too (IMHO).

That sounds like a lot of fun was had.
I know. Politics sucks.Esp today.
We are ok here in Canada (knock on wood)

Put older women together and you can always be sure of lots of laughter and fun.

No news here about all the trouble in Belgium. It does look bad. Our govt. seems to be trying to do the same thing and find lots of $$$$ to reduce debt but not with such catastrophic results.
Charlie, I think you must have very good teeth.

Well done for going to so much trouble with the present. She must have been delighted - I know I would.

Hi Gattina .. sounds like a lovely present for your art teacher .. and 80 is a good age - the party looks fun too ..

Well done on getting it sorted .. and the mowing done! Even if Oscar just followed your orders!! cheers Hilary

What a wonderful surprise for your art teacher!
Your autumn basket looks lovely. I can't get past Oscar, though. A lawnmower robot? I've never heard of such a thing!

Love your blog!
Please come by and visit at; www.herecomesnoodle.blogspot.com

Rain is keeping me in today. But we're heading for a cold snap in North Idaho.