MY WEEKEND OF NOV 1

I had put my Halloween witch at the entrance and had put a witch hat on and also had a broom. The first once were my neighbor's little kids. When I opened the door and the little boy saw the witch and the little girl my hat, they started to cry ! It took me some time to calm them down and show them that the witch was not dangerous at all. Then the little boy helped himself with the chocolate and sweets, I chatted a bit with my neighbor and off they went. 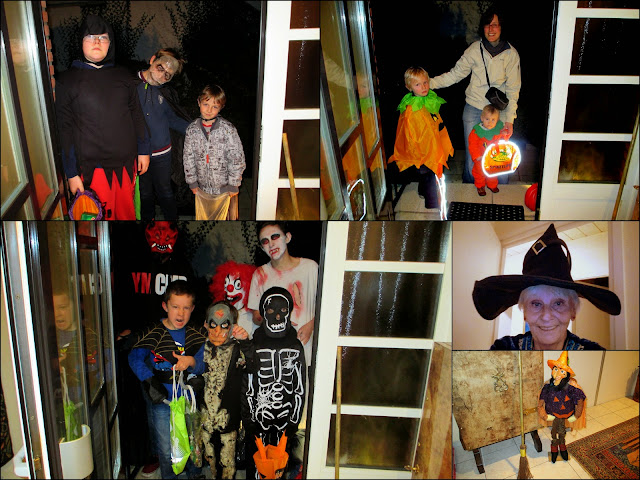 The next bunch were 3 little boys, and then a whole group of terrible monsters. They were laughing and had fun with me posed for the picture and emptied our basket with the sweets ! Fortunately nobody else rang at the door !

The whole weekend we had a dream weather ! It was so warm as it had never been since 1901 ! (I can't remember) we had 20° (68 F) when usually it is already cold and even sometimes it had snowed. 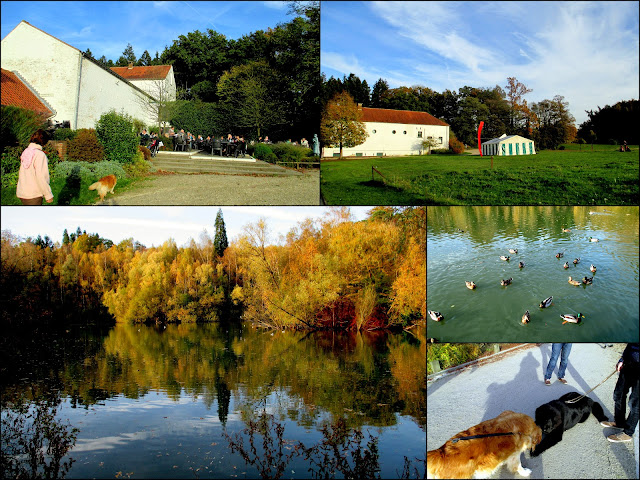 Of course I had an itch to go out and together with Nicole and Charlie we went to a nearby park. Charlie met some friends and we admired the beauty of the woods and had a drink on the crowded terrace.

Nicole had another Charlie story, she wanted to buy a bread baking machine and as the store was not that far away (still at least 3 km) from her home she wanted to walk and took Charlie with her. Coming out of the street, Charlie sat down and didn't want to move anymore. There was nothing to do, when he has decided something he is very stubborn. So she told him to go back home, which he did. When she was in the shop and stood at the check out, a little girl said to her mother "Mum look what a beautiful dog !" Nicole turned around and who was there .... Charlie ! He had walked from home alone to the shop, it's a mystery how he knew where she was and such a long way. On top he had to cross a very busy highway like street, which made us shiver only to think about it ! He had even managed to go inside the shop probably waiting until somebody had opened the door ! All's well that ends well, and they returned back together ! But now she will tie him up, before she goes away ! 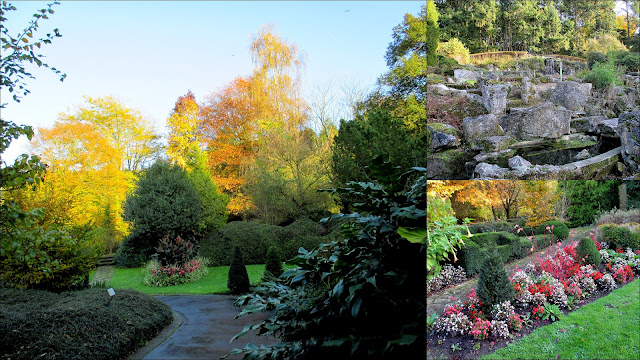 I wanted to take some pictures of the still unusually green trees and blooming flowers on a 1st of November. Ilona and I went for a walk through the Huizingen park, it was just amazing to see flowers still in full bloom and some of them started new blooms !

On Sunday morning Nicole and I took the bus to the Midi Market. It had been a very long time I hadn't been there. My cigarette supplier had disappeared "on holidays". The market was very crowded because of the sunny weather and besides fruits and vegetables, we both found a nice winter coat, mine in black hers in white of a famous brand, to a more than cheap price. I also found a nightgown and stockings. Then we had a drink on the terrace of "my" café, listened to the music of the old Brussels' accordion player and chatted with the people.

On our way back we met a Canadian who was a little lost, he wanted to see the Waterloo battle fields. He was so happy to find somebody who spoke English and as Nicole lives very close to this famous place, she took him under her wings and showed him were he had to get out of the bus and of course the way. I had to get off earlier. It happens quite often that I meet lost tourists and help them out. It's not so easy to find the battle field when you don't know the place. I think Brussels should do a little more about that, there are lots of informations about Brussels, at the station where they arrive,  but not very many about Waterloo !
Posted by Gattina at 06:30

I had chocolates ready at the door for Halloween, nobody came so now I will have to eat them myself.
Do you think your cigarette man might be in prison for selling cheap cigarettes?
Charlie, you are a very smart dog!!!

We are mean. We go to the movies on Halloween to escape the hordes of kids who come knocking. You are good to get in the spirit of it and dressing up too.
Its good to hear you are having nice weather. Bloggers in USA are already getting snow. We jumped from a few weeks of spring straight into summer temperatures but without the humidity so that is fine.Charlie is clever if not obedient.

That Charlie is always up to tricks :) Halloween is starting to catch on here too. Not sure whether that's good or bad. You're having gorgeous weather. I am sure you're happy.

This Charly is incredible, like a person! If only he could speak he would say so much! I agree with you! Waterloo is a special place Brussels can't forget! But just one would like this: Napoléon!