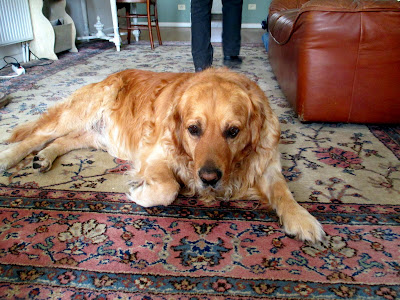 This is Charlie, my friend Nicole's dog. He is the best dog in the world, I love him and he loves me, he only barks once when I ring the bell but then he recognizes my voice and brings me some of his toys to welcome me.

Charlie is a well educated dog, he doesn't pull you (unless he sees a cat), he walks quietly besides you, he sits and lays down on command. He gives the paw and does everything what his beloved nanny asks him.

When he comes to us, he first checks the whole house, has a glance on my sleeping cats, but ignores them, they are part of the furniture. Then he empties all the rests in the cat's food bowls and with two slobbers with his tongue empties the water bowl. My cats would need two days to do that. Then when he has done his check up, he lays bravely down and listens to our silly conversations, and falls asleep.

He only has one fault, he is stubborn, I never thought that a dog could be stubborn like that. 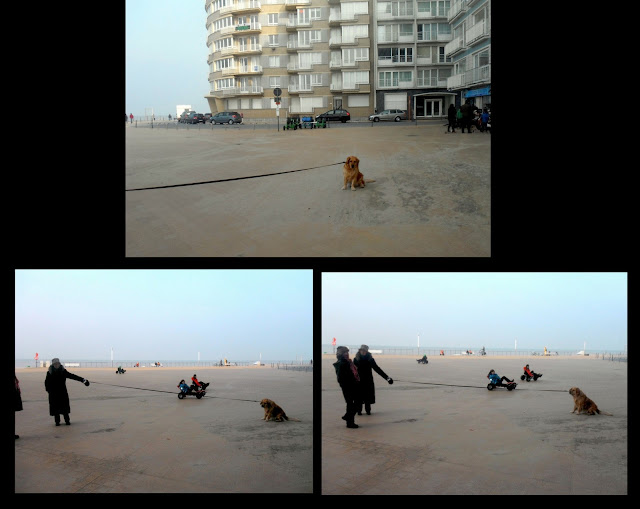 I noticed that for the first time when we were at the Belgian coast. Suddenly in the middle of the road he sat down and didn't move. Nicole and Ilona pulled and pulled on the leash, but there was nothing to do. I laughed and took pictures but then I helped or at least I tried, I pushed his bottom. We were three vintage girls pulling and pushing Charlie without any success, much to the amusement of the people walking by. Finally we gave up, and we stood there not knowing what to do. Suddenly Charlie got up, went to a nearby café where Nicole used to have a drink before she goes home, looked for the water bowl, drank some water and then pulled us home ! He has his habits, and the fact that we didn't sit down there, didn't please him at all. 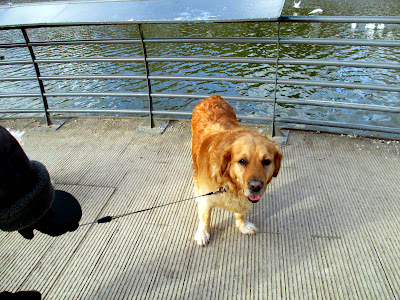 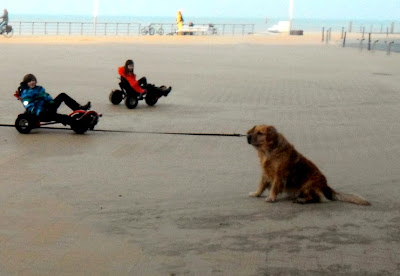 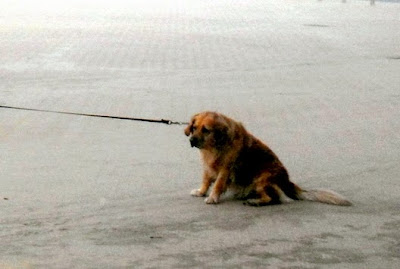 Apparently he always had been like that. Once when Charlie was 6 month old, he sat in the middle of a very busy street, and even then although he was much smaller, she couldn't convince him to move. She stopped a truck by waving with her arms, and told the truck driver that her dog just had decided to sit there and nowhere else. The driver, a huge man, got out of his truck, picked Charlie up and put him on the sidewalk.

Yesterday happened the same. In the middle of the very busy main street going through whole Waterloo, Charlie stopped, sat down and blocked the whole traffic. Nicole got angry, shouted at him pulled and pushed, but stubborn Charlie didn't move. The cars had all to stop and fortunately nobody got angry because it was so funny to see the dog sitting in the middle of this large street with his owner trying by all means, vocally and with force to get him move.

Finally a man got out of his car and they both pulled and pushed him on the sidewalk, while Charly braked with his front paws ! Of course he couldn't be carried anymore he is a big and heavy dog.  When finally the mission was accomplished, Nicole and the man where exhausted.  Charlie, a little offended got up and and showed her the way to the shop he wanted to go to. Of course it wasn't the shop with curtains she wanted to look at, but the shop a little further with dog food and toys !

Charlie knows what he wants !

How funny! Charlie is a brave guy! He has humans' reactions!!! But I imagine Nicole ! It isn't easy for her!

Well done Charlie! You just need to show who is in charge every now and then. Try not to do it in the middle of a very busy road though as something dreadful might happen.

A dog with his own mind. I think he is just taking after his owner and friends.

Hahahahaha! How funny...I wish I'd been there to see that!

Oh I LOVED this post and only wish I could have seen this dear doggie (and his vintage minders) on both occasions! He know which cafe he wants to patronize and he also knows that curtain shops are no good for a dog with a healthy and playful appetite! Good on you Charlie.

Oh my, Charlie, you are the cats meow! I know you probably don't like that term, but I can be stubborn too!
That is the funniest dog story ever! I guess Charlie likes what he likes and that's it!

When Charlie sits down like that, she might as well give in and ask him where he wants to go. It’s easier than tugging and pulling and stopping all the traffic.

I love a living being with a personality, human, cat or dog....

What a character! He knew he needed a drink and wasn't budging till he got it. Good boy, at least he knows what he wants.

my niece calls her second dog shy. The first puppy, she can take to her law firm, but the other one goes to dog day care. He would sit in the office.

If it weren't so dangerous for him to sit in the middle of the road, it would be hilarious! It sounds like some of my goats. I swear I could plow garden rows they way they dig their hooves in.