This morning I had the feeling that winter had moved into the villa it was freezing cold although the heating should switch on automatically. After a couple of hours it still didn't work and as it was a new system Dominique didn't know it and called the company. After some explanations she did what the man had told her so we dressed in several layers and had breakfast and lunch in a rather cool house.

Then we went to Evian a famous high-market holiday resort and spa town on the shores of Lake Geneva it has been visited, over two centuries, by royalty such as Kings Edward VII and George V of the United Kingdom and King Farouk of Egypt, and other celebrities, so of course we had to go to. There was an exhibition of huge old luxury cruise ships in the Palais Lumière, a beautiful building which had once been the thermal bath of Evian. 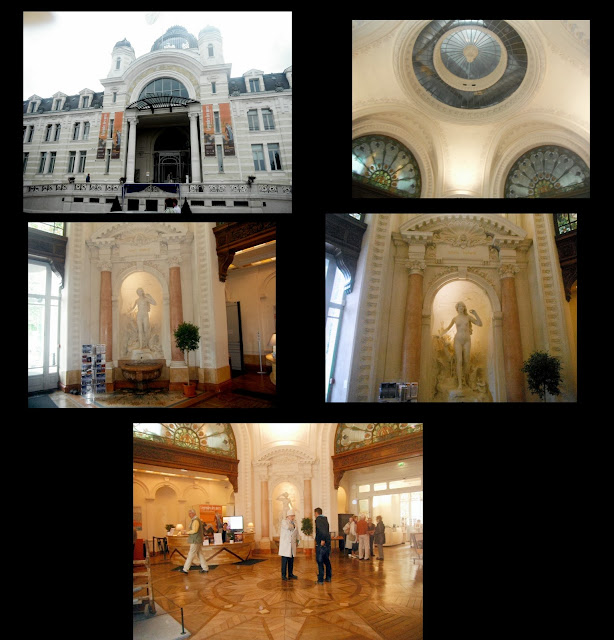 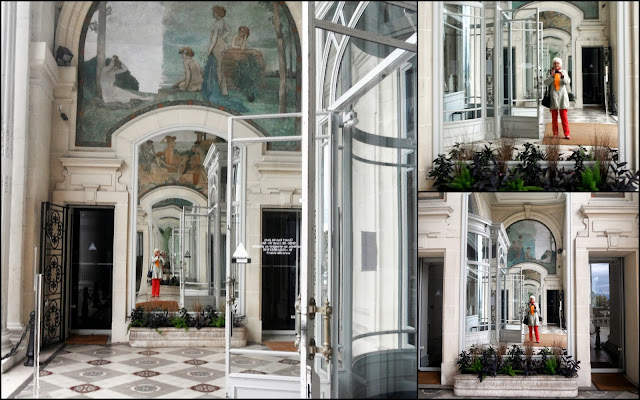 The artwork inside and the architecture of the building were very beautiful. 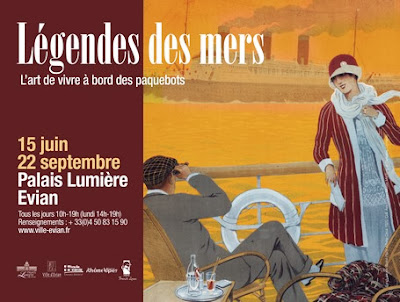 The poster of the exhibition was very promising. I had high expectations and thought I would see replicas of rooms, uniforms, etc. The truth was very disappointing. The ships were little models and the cabins were in doll house size. The only thing which was good was the advertising ! Lots of visitors rather disappointed came out of the exhibition. 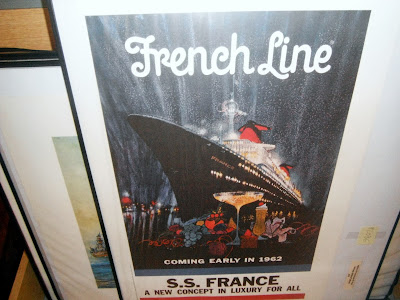 Dominique and Nicole had taken a guided tour which lasted 2 h and I was happy that I hadn't joined them at least I could watch 3 very interesting movies from 1930 showing life and travel on a cruise ship at that time. In fact not very different of the once we have today. 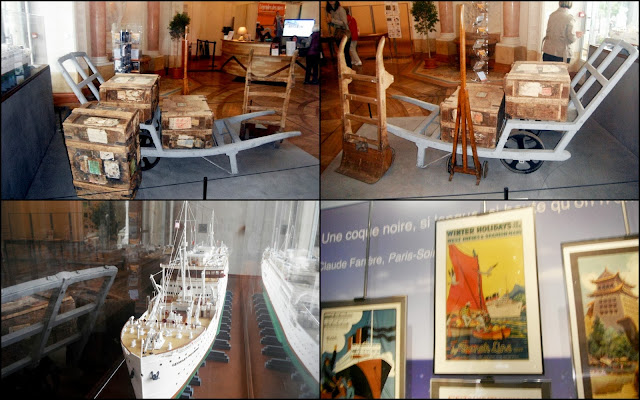 When I went out I saw these old suitcases and a cruise ship. 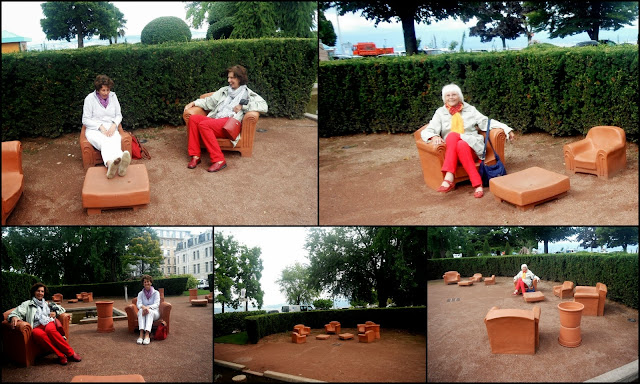 Outside we found this funny little place to sit and Dominique squeezed herself into the children seat.
Then it started to rain and we returned home.

Instead of a warm house the heating hadn't worked at all and it was still cold. Suddenly we heard strange loud noises, like whistling, growling, squeaks and rumbling. It was as if all ghosts from Thonon had a meeting somewhere in the house. It was rather eerie. We followed the noise and found out that it came from some hidden tubes in a closet on the second floor and more loud in the utility room on the first floor. Apparently there was a problem with the heating. The house is heated through the tiles on the floors. Before the house blew up and I had to day goodbye forever to you all,  Dominique called the company again, and a man came immediately to check what was wrong. Fortunately it was only air which were in the tubes and caused this noise, as the heating hadn't been used for a long time. Relieved we had our supper and Dominique and Nicole some glasses of red wine, to calm their nerves. After that we laughed about our adventure and finally it was good that it had happened while we were here and not when nobody was in the villa, although there is a guardian who checks it regularly.

It would be sad for Gattina to be survive to such an age and then get blown up by central heating. I hope you are warm now.

What a wonderful art deco picture of the ship. I think you chose well to watch the cruise ship movies.

A 2 hour tour sounds too long for me, I would lose interest after 10 minutes. Interesting exhibition and beautiful building. My first trip to the U.K was by ship. Sydney to Southampton took 5 weeks on the Greek ship 'Australis' We returned 5 years later on the same ship. Going through the Panama canal on the way over and the Suez canal which had just reopened on the way back.

On every vacation you have to have one not so great day in order to best enjoy all the perfect ones!