It had rained the whole night but my ceiling stayed dry. We heard the wind howling around the villa and the very noisy rain. When we got up the lake was grey and we could hardly see the mountains on the other side. A little disappointed we had our breakfast in the kitchen instead of the terrace and were happy that we were invited by my son's friend whom I knew since childhood when they both went to preschool together in Waterloo. I think they both were 4 years old !

Now he lives with his family in Coppet a little town near Geneva.Thanks to Mrs GPS we found his house immediately. I found it very nice and loved their furniture, it looked all so cosy and warm although the furniture was very modern. I had never met his wife and liked her immediately. She seemed so cheerful and obviously very warmhearted. I also met his little 5 year old son. It was so nice to see how he lives now as a married man and Daddy after all these years.

Coppet is home to the Château de Coppet, which once was home to Madame de Stael who  was a French woman of letters of Swiss origin whose lifetime overlapped with the events of the French Revolution and the Napoleonic era. She was one of Napoleon's principal opponents. Celebrated for her conversational eloquence, she participated actively in the political and intellectual life of her times. Her works, both critical and fictional, made their mark on the history of European Romanticism.

Before we visted the castle we made a little walk through Coppet, which  is a cute little town. 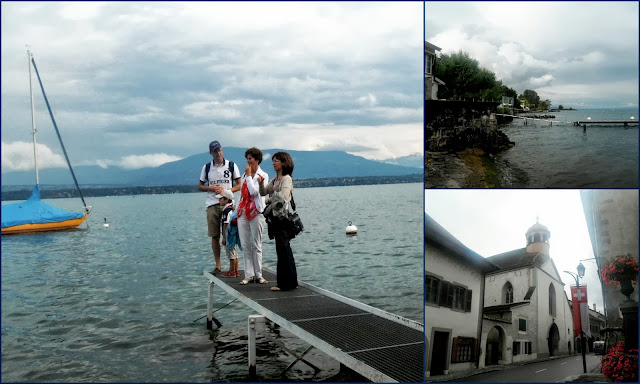 Dominique admiring the lake and the houses along the lake with my friend and his wife. 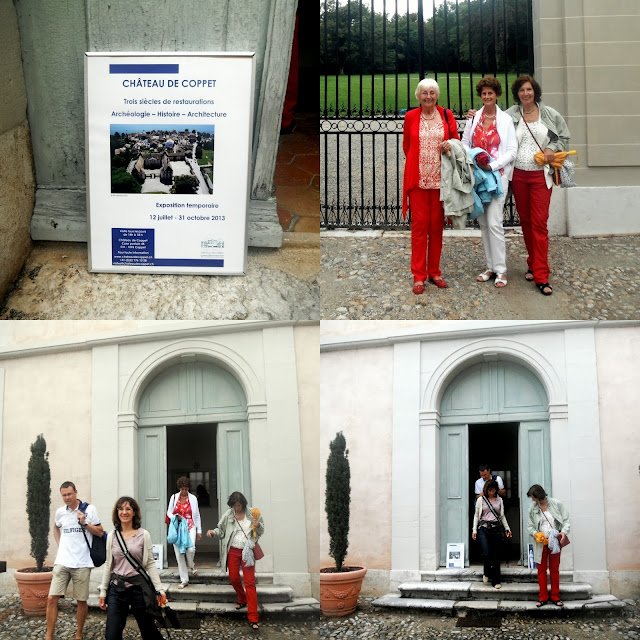 Coming out of the castle, 5 year old Michael was surprisingly brave, because honestly I found the guide's explanations also boring, so we sat  on the steps and whispered together. I always prefer to look at the different things and read later about their history. 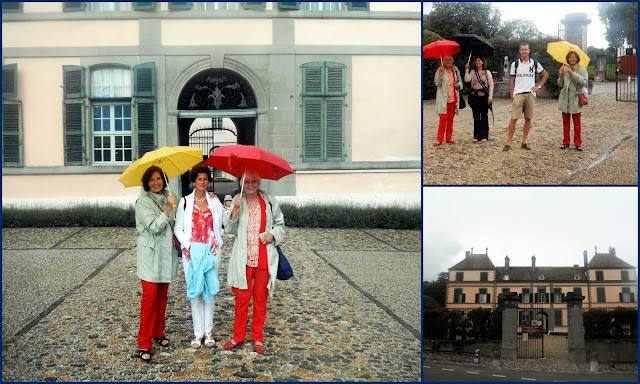 Unfortunately it started to rain and we decided to return home. We said good bye and returned home. The rain meanwhile became so heavy that we could hardly see the streets and  got the impression to drive through a permanent car washing drive ! It was awful ! The water stood high on the streets, and we were glad when we finally arrived home safely. My room was still dry and after a supper and a glass of wine we were tired and went to bed. It had been such a nice day !

Wow, what a wonderful young couple that is. And the little lad seems to be so well-behaved. Good on you for sitting with him on the steps throughout the boring guided tour! I love the history of Coppet and will Google that opponent of Napolion's even further. Enjoy your holiday - every minute of it. (((Hugs))) Jo

Too bad it rained so much

Oh no :( I was hoping you would have beautiful weather.

You were lucky to beat most of that rain. It's a beautiful castle...and I bet your friend's little boy appreciated that you paid him some special attention! It is fun to see people all grown up when we knew them as children~!

You find such interesting history wherever you go. Not hard in Europe I suppose where it is around every corner. Nice to have you're son's friend nearby. Was he at the wedding.