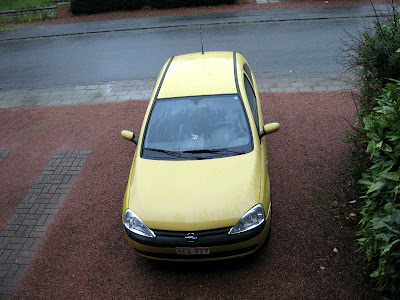 Four years ago I owned a yellow car. Now you probably wonder why I say that, everybody today has a car and therefore it's nothing special. But mine was special ! It was yellow ! I didn't order a yellow one on purpose, but I needed a car immediately because mine had been stolen and I had to take the one they had in stock and that car was a bright yellow  ! Even Google Earth would have located me.

It didn't look bad, I would say, but WAS not very discreet. I could never have been a detective and follow a car with an unfaithful husband, a secret service agent or a spy. I would have been noticed by everybody.

So I thought as long as I have my "discreet" yellow car, I have to behave correctly, I can't do anything illegal : robbing a bank, dealing drugs or only be a drunken driver.

I had to conduct a respectable life and drive my yellow car without attracting attention.

After 10 years of celebrity my car let me down too often so I had to buy a new one.  Again I hadn't the choice of the color but this time it was a very discreet one .... grey blue. Now I can go wherever I want to incognito, nobody notices me, I am like everybody !

I might have to rethink my wish for a bright pink car now. That would be noticed by everyone too! Mind you: if you get lost in the woods, there's always someone bound to have seen you go into them in the first place!!

Yellow is my favourite colour but I have never managed to own a yellow car, perhaps that's a good thing. My present car is sort of a silvery blue.

We have lots of yellow cars in Australia. In fact we have many different brightly coloured cars. We have noticed in LA that there are mostly dark cars.

I am sure there are yellow cars in this country but I don't notice them so yellow must not be so bad after all.

It would be hard to be the only one with a car that color and try to be sneaky. I once had a yellow car, and I thought everyone mistook me for a Taxi.

i would love a yellow car! especially bright yellow ... right now mine is silver and it's tres boring!

I used to have a yellow car and I loved it. I called it my yellow canary. It had an aluminum engine and so in winter didn't take long to heat inside. It was standard and I loved driving it.
When I moved I gave it back to my Dad who bought it for me. He didn't refuse lol

but, now that you have that blue grey car don't you find it difficult to find it in the parking lots sometimes? i had a grey one and wandered around looking for it all the time (usually because i am talking too much to stop and remember where i parked it in the first place). now i have a maroon/red one, so it is a little easier to find.

my daughter loves yellow vehicles and covets a yellow jeep

That is SOME story, Gattina! Perhaps you got used to everybody knowing where you had been. Are you liking the discreet life better? You no longer have to live respectably!

Cute story. Oh, what fun you could have with your new incognito life style!

My friend had a yellow car. It was egg yolk yellow. He had your same problem :)

I don't think I would like having a car that was so recognizable, but it sure is a fun story!

But now you have to remember where you parked! With the yellow, you can't lose it.

I would love a purple car so I could find it in the parking lot!

This happy yellow one made me smile! It seems like it would have fit your personality perfectly.

I'm glad you can pursue your dream of becoming a bounty hunter now, though! ha!

Thanks for a fun link to Alphabe-Thursday's letter "Y".