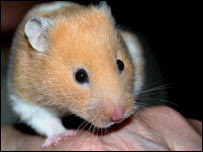 Hamsters are one of many items imported illegally because Vietnam has banned the sale and possession of hamsters, whose popularity has been soaring. That's sad, so many buddists bought them because it is the year of the Rat ! Maybe the government prefers real rats ??

Licence to lie for Italian women

Italy's highest appeal court has ruled that married Italian women who commit adultery are entitled to lie about it to protect their honour.
I am sure in this court were only innocent men. Since ages Italian women are lieing protecting their honour. If they (the men) would only knew ! (hehehe) 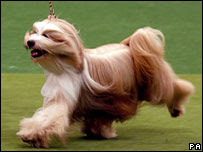 Exposition dogs get hotel treatment
Competitors will be able to relax comfortably in their own beds
Budget hotel chain Travelodge has said it will make its own range of "pooch beds" available for dogs travelling with their owners to Crufts Exposition 2008. Very nice gesture of this hotel chain, but what about cats ??

A Sudanese man has been forced to take a goat as his "wife", after he was caught having sex with the animal by Mr Alifi the owner of the goat. He then called elders to decide how to deal with the case."They said I should not take him to the police, but rather let him pay a dowry for my goat because he used it as his wife," Mr Alifi told the newspaper. Nothing surprises me anymore. The only thing I am worried about is that I am also a goat in chinese astrologie ! Poor animals ! 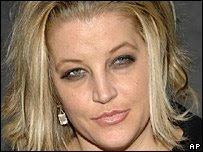 Singer Presley sues over article
Lisa Marie Presley is expecting her third child
Singer Lisa Marie Presley is suing the Daily Mail for libel over publishing an article alleging she is overweight. The 40-year-old daughter of Elvis Presley said the story, which was widely republished worldwide, forced her to confirm she is expecting a baby. Poor Lisa Marie, always compared to her fat father. But she really looks like him.
Posted by Gattina at 07:58

You are just full of information. :) So what will happen to the hamsters now? I agree they should make cat beds too. :) And I feel bad for Lisa, she has always had to live in the limelight.

I just can't feel bad for Lisa Marie. I have seen her interviewed several times and she is a pig. Maybe that sounds harsh, but really she is so unmannered and uneducated it is appalling! I don't care if she is Elvis's daughter!

I was all nervous because I left the house this morning without having a chance to read your compiled news!!
Now I can relax, lol.
Lisa Marie looks terrible, she needs a healthier life!

really on the hamsters??
I was typing and read the post to the left. i cringed.
I have always liked Elvis and Pricilla and Lisa..i was born the day before Lisa same year and I guess i always felt so bad for her.
what a life she has had . i don't blame her for getting upset about them saying she was fat. Iam glad she's fighting back.

I just have ONE question for the Italian government -- how much HONOUR does a cheating wife HAVE, that she should be allowed to LIE (in court) to protect it???

And... I hope Lisa Marie does NOT read your blog or we will ALL be sued for libel! She is just ugly! I don't think she looks like Elvis at all... HE was "pretty" - at least when he was young!

I am with Jettie - I'm glad to see that Lisa Marie is fighting back too. I'm so sick of tabloids running stories about "fat" celebrities. I realize she is pregnant, but I'm sick of magazines writing stories making it seem that women with a little meat on their bones are worthless or ugly.

As far as the hotel chain offering dog beds, this does not make me happy. I'm allergic to dogs and I can't tell you how many times I've spent a miserable night in a hotel room because someone had a dog in the room at some point. Thanks for the story so I know not to stay at a Travelodge! :-)

You do find the most amazing pieces of news. It's close but I think my favourite is the Italian liars one. It's such an 'Italian' thing to do!

In Saudi Arabia their was a "camel lover" (ala your goat lover item). They had to slaughter the camel for it was considered unclean. Lucky they didn't kill the camel's paramour.