Starlet Lindsay Lohan got the Golden Raspberry Award as the worst actress in "I know who killed me" a movie which also got the title of the worst movie of the year ! At least she got an award to allow her to be in the Newspaper ! I have got many awards, especially here, but have never been in a Newspaper ! That's not right ! 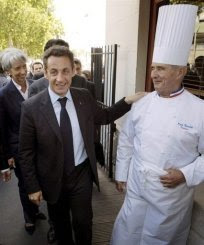 French President Nicolas Sarkozy announced Saturday that he will ask the UNESCO to recognize the French Gastronomy as cultural heritage because according to him it is the best in the world.
I really wonder why his parents haven't called him "Modest" instead of Nicolas. Sarkozy outburst at farming fair
A man at the Salon International de l'Agriculture refused to shake the president's hand. The man drew back and said : "Oh no, don't touch me, you'll dirty me."
Mr Sarkozy snaps: "Get lost then you bloody idiot, just get lost!" to put it in a mild English translation. Now he takes himself for Prince Philip, the Queen's husband he too always shows his good education. Unfortunately he wasn't born to be a Prince but only a President. 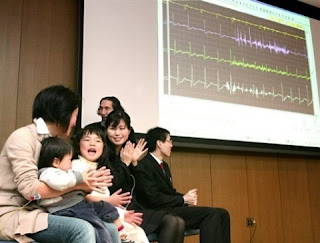 A japonise professor has invented a machine to mesure laughter. This machine allows to detect if you really laugh or if you laugh cynically or mockingly. Some countries (if not all) should buy this machine to test their politicians ! Then we all would know the truth ! 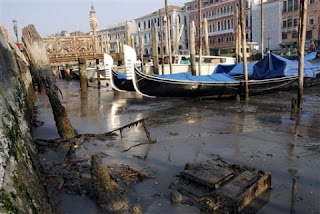 The Venice Gondoliers unemployed
Due to the exceptional low tied on sunday the canals were almost dry and the Venice Gondols were forced to stay in their emplacements. What a catastrophe ! The poor honeymooners !


Elections between Hitler and Frankenstein
The choice seems to be bizarre, even impossible, but there is really an election between Hitler, real name Adolf Lu Hitler-Marak, and Frankenstein Momin in the little State of Meghalaya, north-east of India. Both men pointed out that their parents didn't know who these persons were and only choose the names because they liked them. The election will take place on march 3. What do you think who will be elected ??

In Belgium a woman was murdered in a house standing exactly on the borderline with the Netherlands. When the body was discovered an official survey had to come first to determine the borderline running through the house. While the living room was located in Belgium the bedroom was in the Netherlands. As the body was found in the bedroom the dutch police was charged with the investigation. A typical case for CSI (the dutch one of course !)

The poor murdered woman laid there while the police from the two countries debated on who's responsibility is it? Gosh.

I always look forward to your news. Some of these top notch articles we do not hear about here in the USA! I guess we are sheltered! LOL

Goodness! So much going on in the world this week! I would be SO sad if I went to Venice and could not ride in a gondola! That just IS sad!!!

I was not aware that the tides could do that to Venice.

you find some wonderful stuff out there. Especially the laughter machine. ( I wonder if it has a tickle feature?)

Sarko is always in the news, he seems to need that daily dose, lol.
Talk about bureaucracy and that poor lady, oy...