Happy New Year to all of you, this is my first post in this New Year which I hope will be better than the one we have behind us and which I think made me loose a year of my life.

Living nine month like a prisoner under lockdown with a little interruption between Lockdown N° one and N° two which is not yet finished and very much to my great regret, we had to take the lockdown with us into the new year.

Nothing really happened between Christmas and New Year, we had our lockdown meeting twice, otherwise I went shopping for our New Year celebration, because this year we celebrated New Year's in our home.

The official rules for New Year was one "bubble" (humans living under one roof are now called bubbles) plus one guest and on top a curfew at 10 pm !!

We found a solution we probably celebrated with the Australians or another continent where at 8.30 pm our time it was midnight somewhere !

Our guests arrived between 3.30 pm and 4 pm in order not to arrive all at the same time. We were all together 6 so not exaggerated, only 3 too much ! 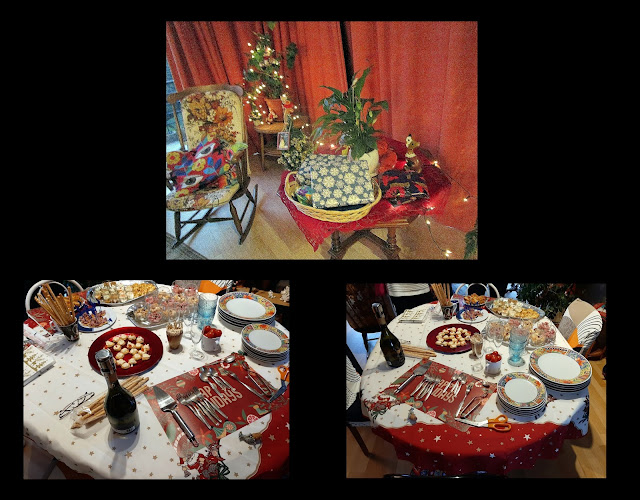 Everybody brought something special to eat and his drinks. I had dressed the table as a buffet and everything was put on, except a delicious Tiramisu which Chantal had made herself as each year, and which we had put in the fridge. The bottles of Champagne (without and with Alcohol) were on the balcony. 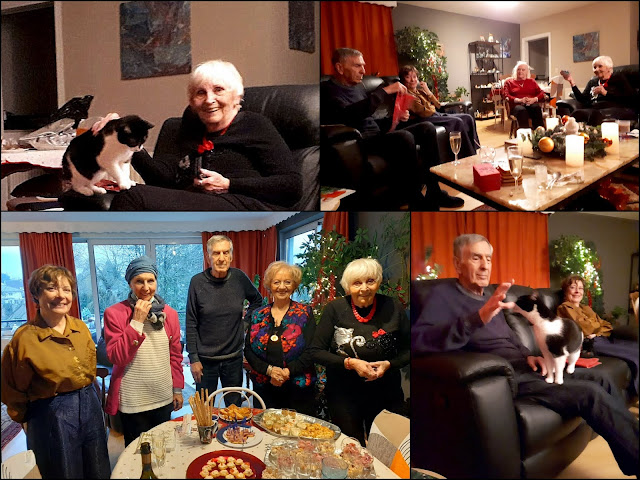 Then we started our "evening" we chatted ate and were "thirsty" Champagne always tastes good ! Little Rosie was happy she went from lap to lap and was the star of the evening.

After the Tiramisu which was delicious, we started our game as we do each year. One person takes the two little gifts she had brought and let the others touch it and they had to find what was inside ! That was hilarious because sometimes it took half an hour until we found the solution ! Of course we had a lot of fun. When all gifts were distributed it was close to 9 and we decided that it is midnight now ! We raised our glases and wished (without kisses) a happy and better New Year to each other !

At 9.30 they left because everybody had to be at home at 10 !! What a special New Year celebration but at least we had as much fun as the other years.

I wasn't tired yet and watched a show on TV, at midnight I heard some fireworks and went on the balcony. There were two on one side of the building and two on the other. Fireworks were striclty forbidden and a big fine of 750 € had been fixed for those who didn't obey !

They didn't last long, and then I saw helicopters in the sky probably the police checking from where it came. What a New Year's night ! It was a silent as in a church. Everybody remained inside.

I got Whatsapp message from Toby proud owner of his first Smartphone, he is ten and I found it really touching that he had thought of his grandma ! His parents followed. They were celebrating in Amsterdam and at midnight they had made a fire in the street (well protected) to warm up everybody and all the neighbors gathered around to wish each other a happy New Year. I found that very nice. It was outside and everybody was in front of his house so no rule was broken ! (or maybe a little bit) 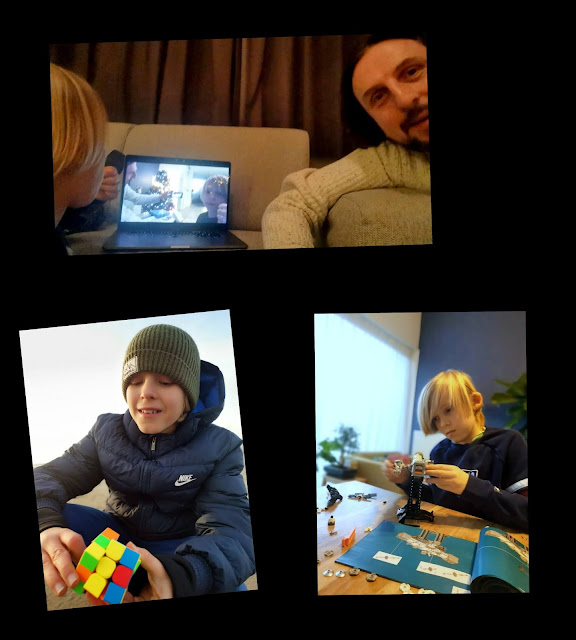 Toby with his new gifts and the family video call, as so many families did this year ! At least we could see and talk to each other ! Would have been terrible if we wouldn't have these possibilities !

more participants at Susanne at Living to tell the Story.
Posted by Gattina at 12:34

It looks like you had a very nice celebration, after all!
Wishing you, Gattina, a wonderful New Year with good health, prosperity and satisfaction from your family1

wow...your country is in lockdown again just like England?? I. guess I'm thankful that isn't happening here in New York State. We are being careful of course her and following health guidelines but I refuse to live in fear. I wear a mask in public and teaching has been fine and slso I wash my hands alot. Life goes on....

i say look for the blessings and just pray this virus winds down and people get vaccinated. I might get the vaccine.

Sounds like a fun get together and so nice that your were able to speak to your grandson and family. Wishing you every blessing for the new year.

Sounds like you had a fun new year celebration! Your table setting looks very festive! We had fireworks going off through the night. I don’t think it was prohibited here. One of my kitties was very unhappy with all the noise.
Wishing you and your loved ones a very happy new year!

I think we don't want or need anther 2020 total replay.
Coffee is on and stay safe

Well it sounds like you made the best of things and had a nice evening. Your group of friends seems very much like your own little support bubble and I agree that we just have to be sensible and weigh up the risks. If we just listened to our politicians we'd be in a right mess. Happy New Year to you. 2021 has to be better.

You certainly went with the flow there. I was in bed by 11.30 as I had to work the next morning. Didn't really bother me that much either.

We watched Big Ben chime in London (7pm our time), and then our daughter took the youngest grandson home to be in bed before 8:30 or 9:00 pm. I like how you and your friends celebrated.
I too am thankful for technology that keeps us in contact with our loved ones.
Happy New Year to you!

That's so sweet that Toby wanted to call you on his new phone. Glad you got to video call your family. The New Year's party sounds fun. Ours was very quiet.